On February 2nd, 2022, I projected a "winner" and "loser" from the Senior Bowl for each position group:

Now that we are 2 days away from the draft, let's revisit those predictions to see how they have panned out:

I projected Desmond Ridder as the "loser" and Sam Howell as the "winner". Malik Willis was the pre-Senior Bowl consensus QB1 at the time and was the favorite to improve his draft stock at the Senior Bowl.

The result ended up being that there really was no consensus "winner" from the Senior Bowl, however early on Ridder was cited as the clear "loser" at the Senior Bowl after the first 2 practices by all available sources, but rebounded throughout the week to bring himself back to middle of the pack the rest of the week and in the game. 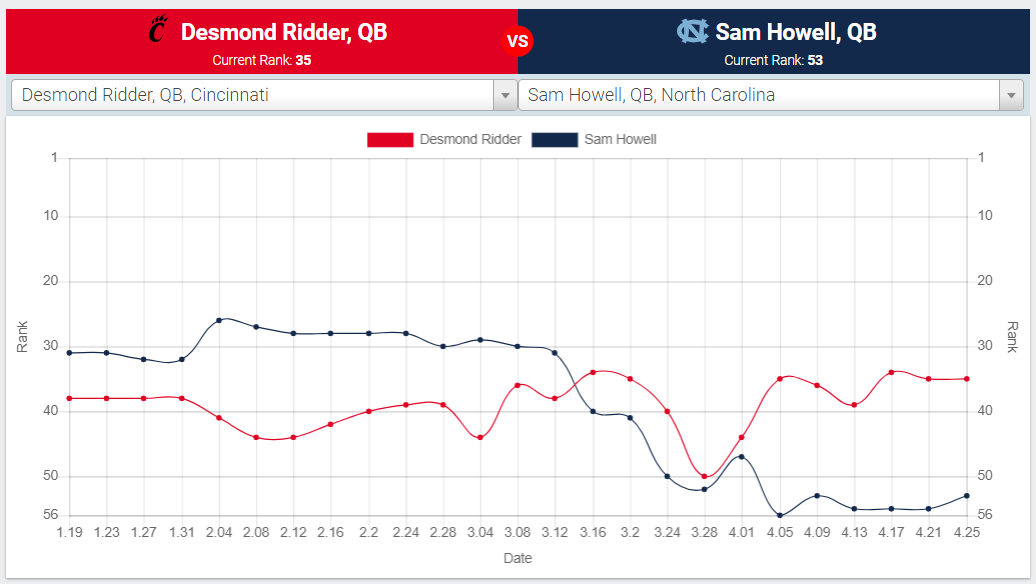 Ridder & Howell Consensus Big Board Ranks, after the Senior Bowl Howell's stock was unchanged while Ridder's takes a dip on February 8th. Ridder has since climbed back up the boards thanks for a great combine and excellent interviews.

Once again, there were no surefire "winners" from the Senior Bowl and no real "losers" either this year. Guys like TJ Pledger put themselves on the map to be signed as an UDFA and maybe drafted with a decent Senior Bowl game, while others like Brian Robinson Jr and Rachaad White solidified mid-round status.

For my predictions, everyone was hyping James Cook after Georgia's Championship run and picked him as the like "breakout" candidate at the Senior Bowl. I went the opposite direction and correctly predicted that he would be the "loser" of the group. He was a "loser" in a sense because his hype died after the Senior Bowl, but he withdrew his name from the roster since he saw the hype he was getting and didn't want to risk injury. The goal of the Senior Bowl is to raise your stock through competing and clearly Cook was satisfied with his ~75th overall ranking, which has since fallen to ~100.

Zaquandre White meanwhile rocketed up the consensus boards immediately after his Senior Bowl week, peaking just inside of the top-150 prospects. He has since dropped to ~250 due to a combine that didn't meet expectations for his on-field athleticism when you watch his tape along with presumably sub-par interviews. 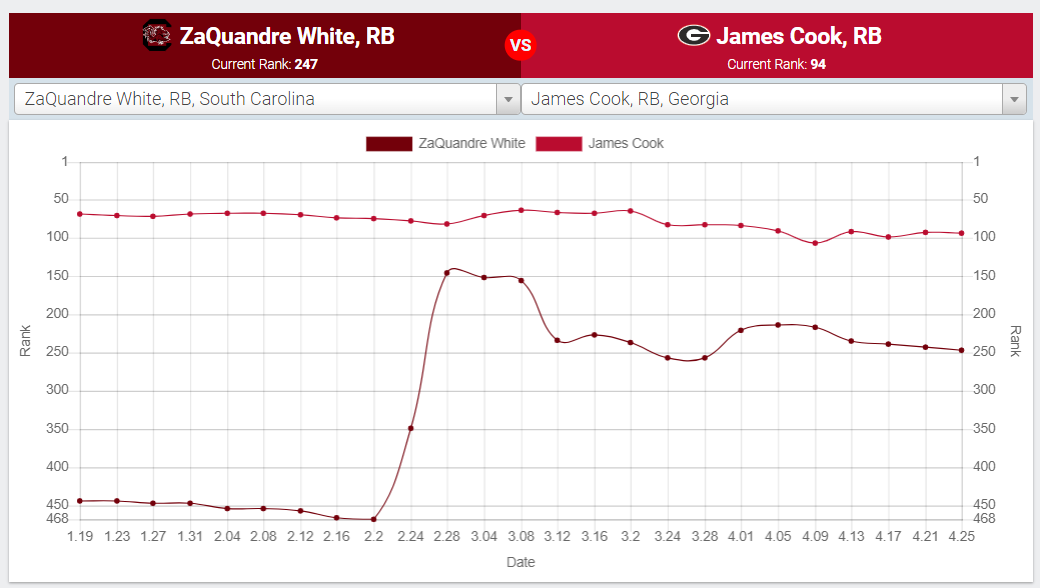 I predicted Christian Watson to be the "winner" and Romeo Doubs to be the "loser". Safe to say I absolutely nailed this one as Christian Watson was the talk of the town in Mobile and Doubs struggled to impress and separate at times, playing much smaller than his 200 lb frame. When you consider that Doubs had the distinction of playing with his QB of the past 4 years, it makes him look even worse that he wasn't able to product that week. That is all perfectly encapsulated in the consensus big board rankings below: 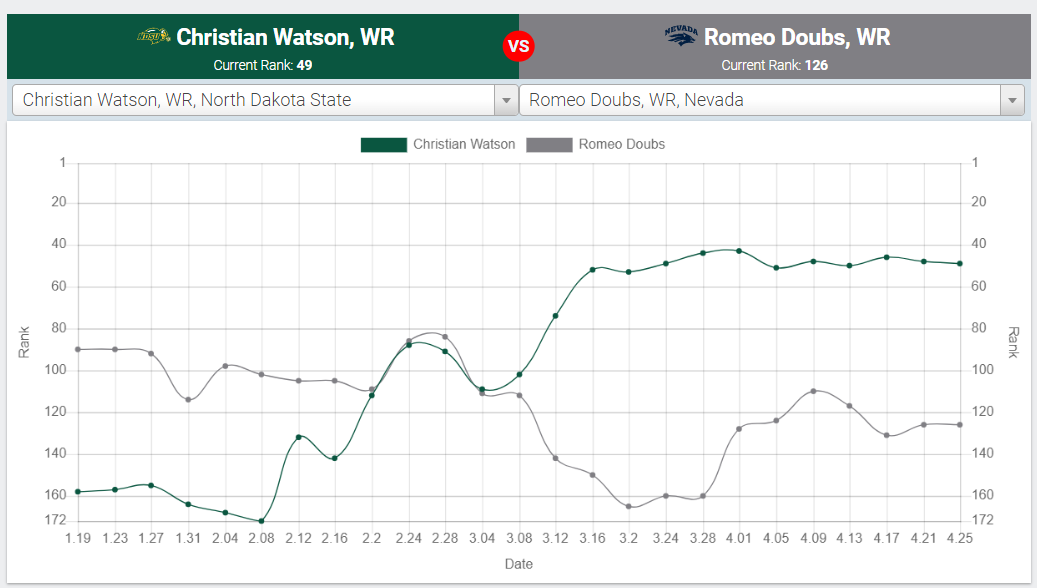 The "winner" of the Senior Bowl from the TE group was the favorite and I purposely avoided the "favorites" or obvious picks for this list. Trey McBride was the winner while Isaiah Likely was nothing more than mere flashes - but certainly was not a "loser" of the week. Cole Turner meanwhile was indeed the singular consensus "loser" form the TE group by all available accounts and is captured well in the chart below: 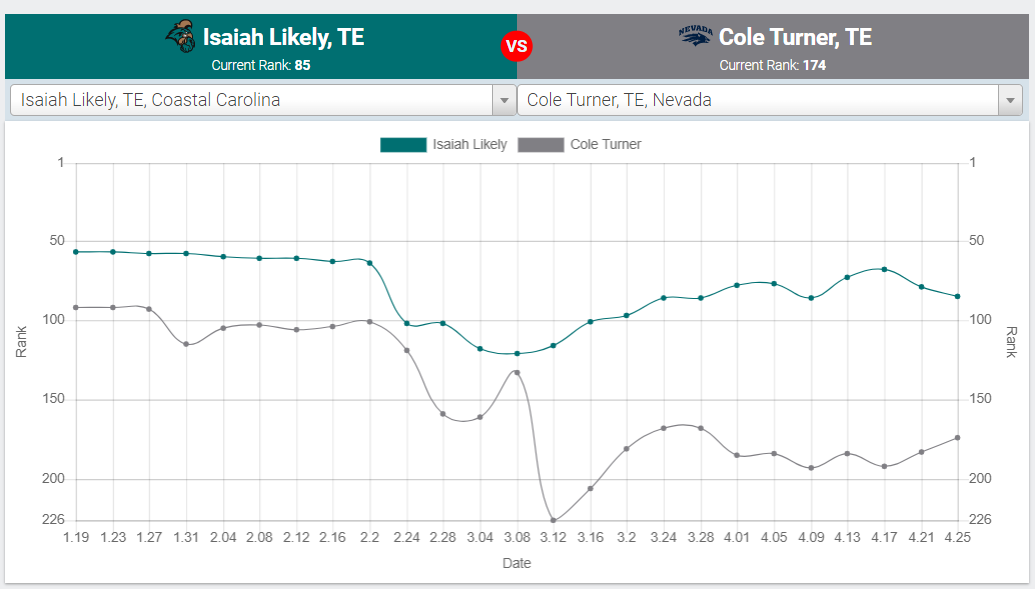 I predicted a couple of small school OL that were pretty lowly ranked coming into the Senior Bowl to be the "winner" and "loser" because picking Trevor Penning to be the big "winner" felt too easy since he was already a projected first round pick. Ultimately, other than Penning being the biggest "winner" I did a very solid job with these predictions.

While Braxton Jones was not the biggest winner (Zion Johnson and Trevor Penning were), he was certainly a "winner" of the Senior Bowl, posting the best PFF offensive grade in the actual game of any OL at the Senior Bowl. He also had a good week of practice and good interviews to firmly cement his mid-round draft stock.

Spencer Burford was getting hype leading into the Senior Bowl, a nice athletic OL who was a previous 4-star and the biggest recruit UTSA ever landed. He helped UTSA have their best season ever in 2021 and helped pave the way for star RB Sincere McCormick. Watching the film and seeing how light he was, I predicted that hype would die after the Senior Bowl and indeed it did. I wouldn't be surprised if he gets picked in the 7th round and I don't think his recent resurgence is real. 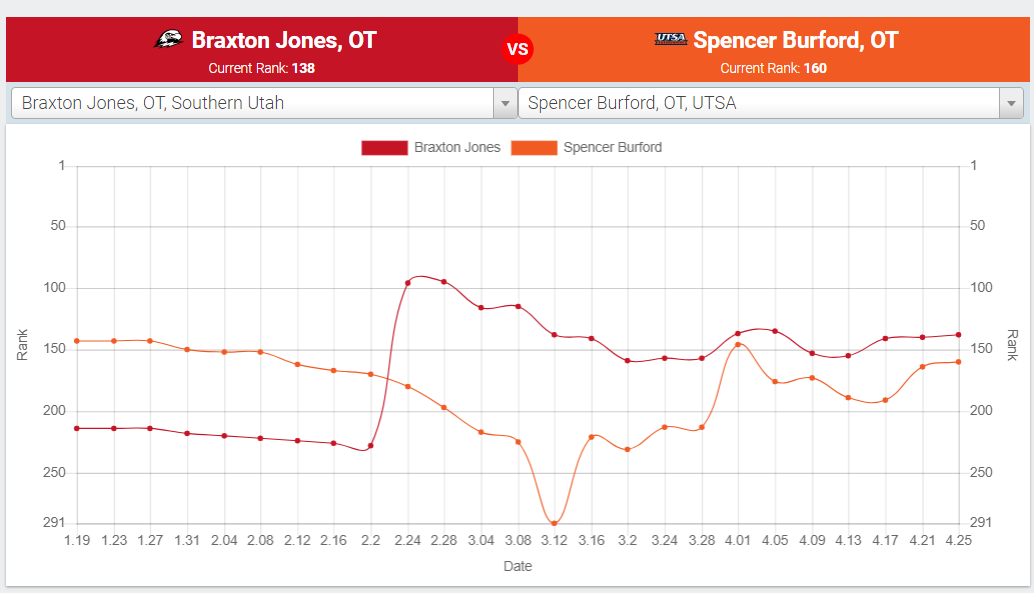 Braxton Jones and Spencer Burford consensus big board ranks over time. Burford fell off quite steeply while Jones spiked after the Senior bowl.

I predicted Ebiketie to be the "winner" and for Tyreke Smith to be the "loser". Those predictions were correct but not emphatically so, with Jermaine Johnson II being the clear Senior Bowl riser and while there were no real bigger "losers" than Tyreke Smith, he was already kind of a "loser" and the Senior Bowl did not change much. 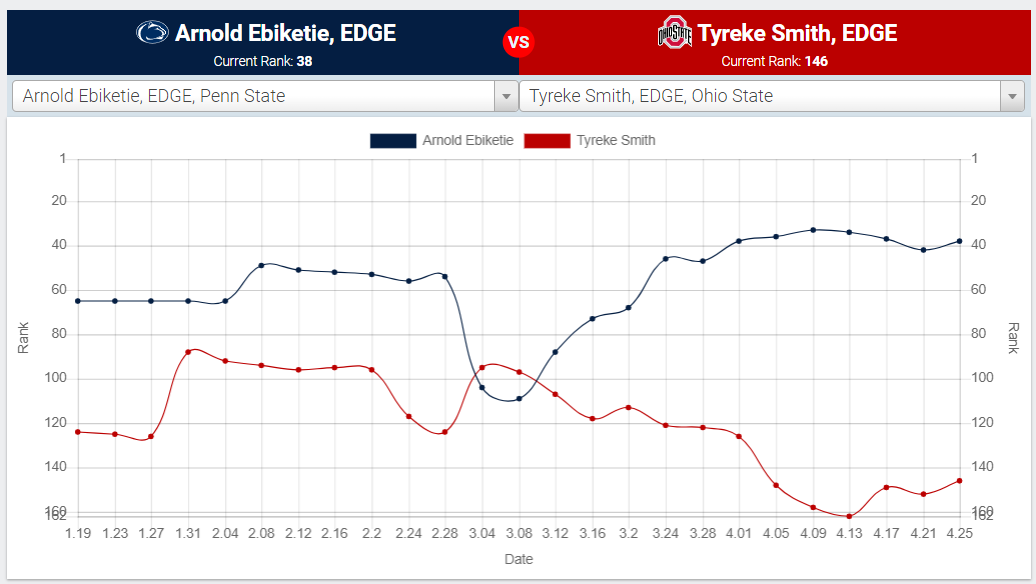 I predicted Neil Farrell Jr. to be the "winner" of the Senior bowl from the DT group and for John Ridgeway to be the "loser". Ridgeway was starting to get some hype before the Senior Bowl while Farrell's stock was flat. Farrell has some of the more slept on advanced performance stats of any DTs in thie year's class, but what the Senior Bowl did was confirm that there are 2 top definitive tiers of DT in this 2022 class:

While I was correct about Ridgeway being the biggest "loser", Farrell was also a "loser" after struggling through injury during the Senior Bowl. 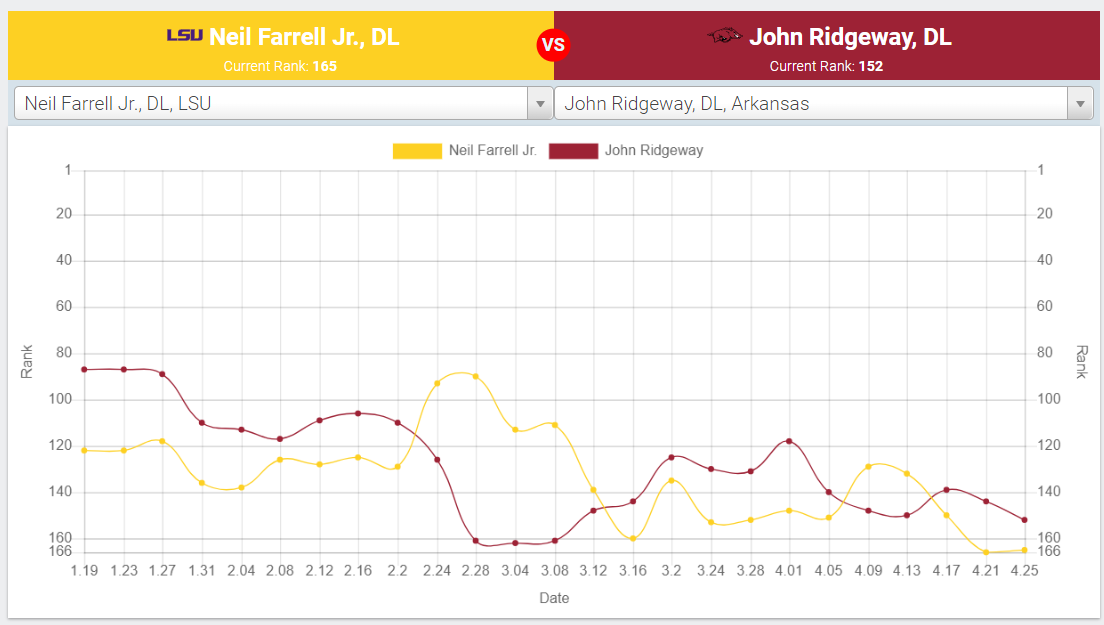 I predicted Mario Goodrich to be the "winner" and Akayleb Evans to be the "loser". This turned out to be the biggest "meh" of all of my predictions. Neither shined but neither embarrassed themselves either. 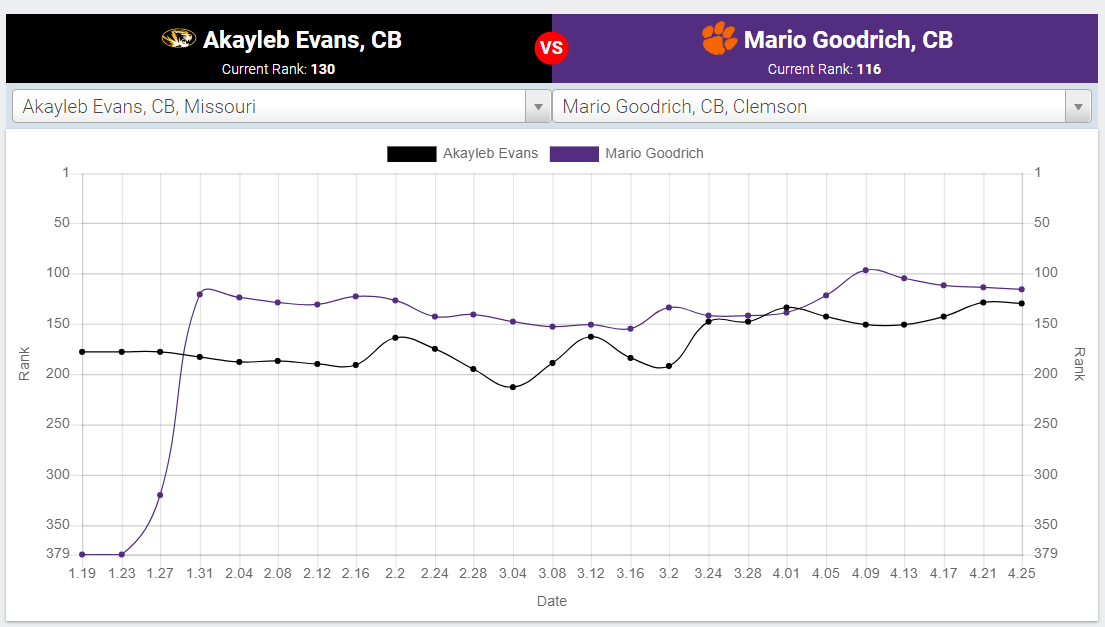 Another position group I nailed, I predicted Troy Anderson to be the big "winner" and Jesse Luketa to be the "loser". Anderson is a hyper athletic FCS DPOY while Luketa was a tweener who was unproductive as a pass rushing OLB and not athletic and nimble enough in coverage or instinctual enough standing up off-the-ball to be a ILB.

Admittedly, Luketa's stock literally rose due to a couple of good reps against bad OTs in the Senior Bowl, so that knocks my own self-evaluation down a few pegs to just "solid" instead of "nailed it". 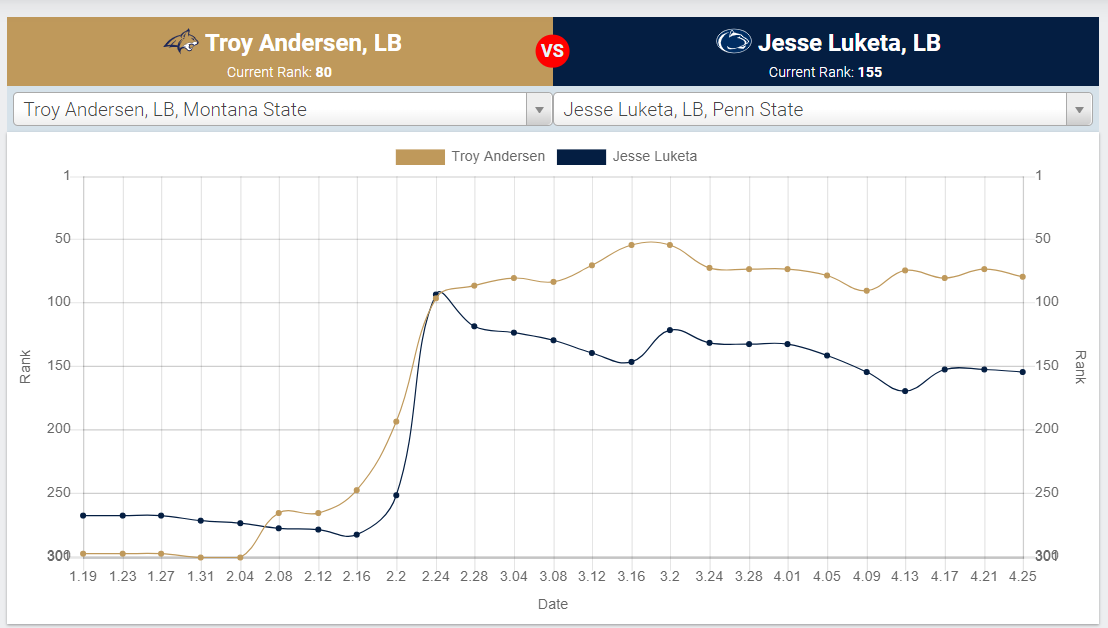 I predicted JT Woods to be the "loser" and for Jalen Pitre to be the "winner". Woods acquitted himself nicely in the actual Senior Bowl game while Pitre was the standout all week. I nailed the Pitre pick, but Woods was a winner of a lesser result himself, so this was overall partially right. 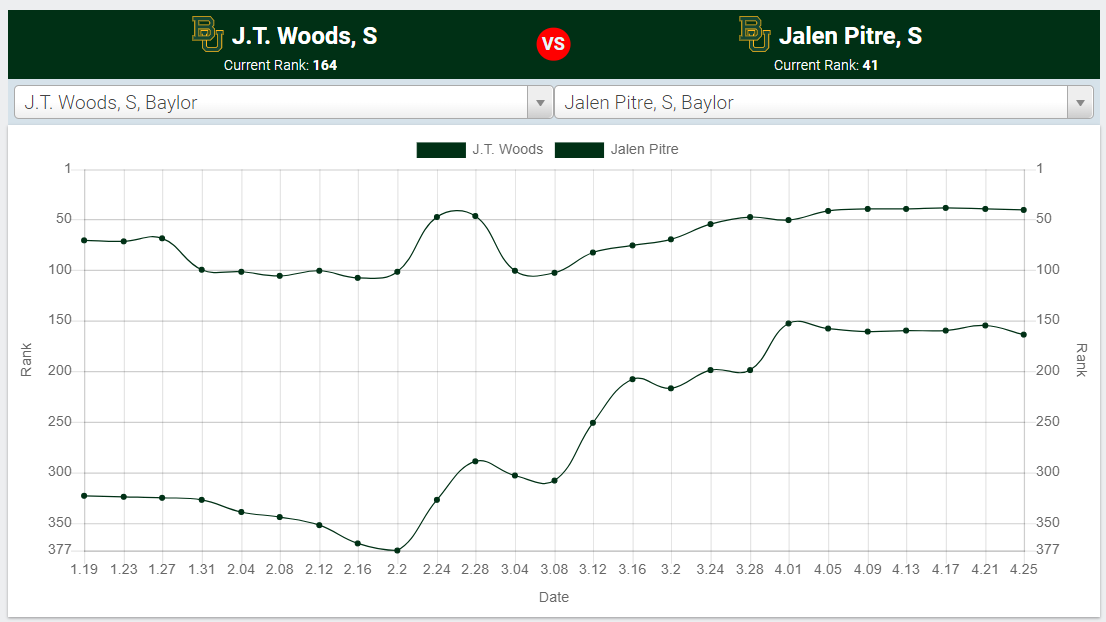