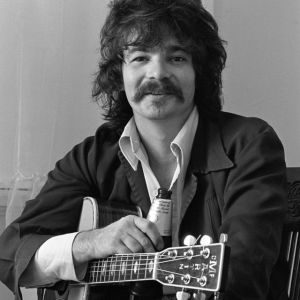 He was Mark Twain with a guitar. A keen observer of ordinary people and the emotional drama, humor, and absurdities in their lives. Though he won a couple of Grammy's for Best Folk Album, he never did become a well known star outside of the folk circuit but you may have heard his songs. Bonnie Raitt did a wonderful version of Angel From Montgomery.

"I am an old woman named after my mother My old man is another child that's grown old If dreams were lightning, thunder were desire This old house would have burnt down a long time ago

Among the famous singers who covered his songs were Johnny Cash, Kris Kristofferson, Joan Baez, Carly Simon, and Bette Midler. Bob Dylan was a big fan of his songwriting. Maybe you've heard his song, Paradise.

"Then the coal company came with the world's largest shovelAnd they tortured the timber and stripped all the landWell, they dug for their coal till the land was forsakenThen they wrote it all down as the progress of man.

And daddy won't you take me back to Muhlenberg CountyDown by the Green River where Paradise layWell, I'm sorry my son, but you're too late in askingMister Peabody's coal train has hauled it away."

As a young man he spent his days working on songs while delivering mail for the post office. He spent his nights singing those songs in the clubs in Chicago. Film critic Roger Ebert saw him play one night and gave him a nice write up the following day, calling him, "The singing mailman who delivers a powerful message in a few words." The words that come to my mind are warmth, wit, and wisdom.

John Prine died earlier this month after contracting the Corona Virus. He was 73.

Now, the rules of the TAN.

2) If I or any other moderators or editors ask you to drop something, just let it go. Please don't argue. It won't end well.

This is the first song I ever heard John sing. He was on SNL after the release of his first album. Just him and his guitar and it blew me away.