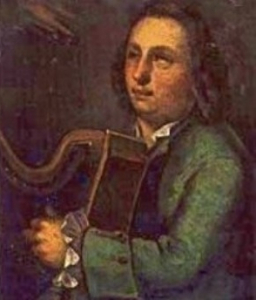 Turlough O'Carolan was born in 1670 in County Meath Ireland. He contracted small pox which left him blind at age 18. The wife of his father's employer, who apprenticed him to a harpist, provided O'Carolan with an education, money, a horse and a guide. He became a traveling musician and became famous not for his skill as a harp player but for his gift as a composer. Many of his richly melodic compositions are played today by performers of traditional Irish music and you've likely heard some as incidental music in a movie, at a St. Patrick's day celebration, or in an Irish bar. The music I've selected is one of his best know compositions, Shi Bhig Shi Mhor.

3) If there is a problem email macgregorwells@yahoo.com and he'll try to work things out

And who better to play a traditional Irish tune than an Algerian born Frenchman, Pierre Bensusan?