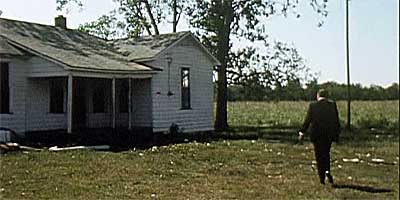 Welcome to the 218th ediition of The Thread About Nothing.
He was the 4th of 7 children. His parents couldn't decide on a name
so the birth certificate read, J.R. Cash. It was 1932, The Great
Depression. His family lived in a small house on 20 acres. It was in
a resettlement community that offered free housing to the poor. It was
part of FDR's New Deal program and included a small stipend for food
and clothing. J.R. was 8 years old when he began picking cotton on the
family farm.
His mother played piano in the local Baptist church 3 times a week and
though there was no electricity in the home, the family would listen to the
music being played on their battery powered radio. Music would become
J.R.'s salvation.
At the age of 12, his older brother, Jack, whom J.R. was close to, was
pulled into an unguarded table saw while cutting oak into fence posts.
The saw ripped into his chest and he died from his wounds a week later.
A pall was cast over the entire family. One night while drunk his grieving father
turned to J.R. and said, "I wish it had been you, instead."
In 1950, J.R. enlisted in the Air Force. His initials didn't satisfy requirements
for the enlistment papers so he chose to use the name, John.
In 1954 he was honorably discharged. A month later he married and moved
to Memphis where he struggled selling home appliances door to door. He spent
most evenings playing guitar and singing gospel music and a little bit of
country and blues with 2 of his friends, Luther Perkins and Marshall Grant.
That same year, the trio worked up the courage to audition for record producer
Sam Phillips at Sun Studios. They played some gospel music but Phillips was
looking for something different.
So John went home and put a rockabilly beat to a poem he'd written about a train
ride he'd once took. They returned to the studio and played it for Phillips who listened
and said, "There's something squirrely about you guys but it's different."
The record was made and released as "Hey Porter'. Backed by Cry! Cry! Cry!,
the single was an immediate success and soon the man born as J.R. Cash would
introduce himself to audiences the world over. with "Hello. I'm Johnny Cash."
Here's the rules.
1) No politics, no personal attacks, no excessive swearing, no porn, no graphic violence/ gore.

3) If there is a problem email macgregorwells@yahoo.com and he'll try to work things out.