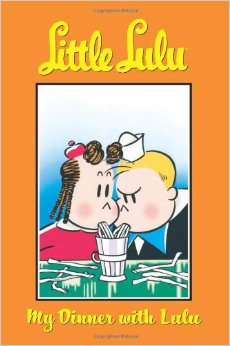 Welcome to the 149th thread about nothing. Have you ever wondered where the song title, Be-Bop-A-Lula came from. Me neither but here's the story. Gene Vincent enlisted in the Navy at age 17 during the height of the Korean War. Shortly before his enlistment was up he reenlisted for another 6 years and collected a whopping reenlistment bonus of $612.39. He used his bonus to buy a Triumph motorcycle which he promptly crashed into a car and shattered his left leg which earned him a medical discharge.

While recovering in the hospital, he strummed his guitar and wrote the song Be-Bop-A- Lula. His inspiration was a popular comic strip character named Little Lulu who had a friend named Tubby who wore a navy cap. Well...Who among us hasn't lusted after a cartoon character at one time or another? Be-Bop-A-Lula was released as the B side for his first single, Woman Love. It soon eclipsed the A side in popularity and became Vincent's first hit record.

The Navy's got plenty of rules but who cares? We manage to get by on just a few and here they are...

2) The mods have ultimate, mind boggling authority. If I or any other moderators or editors say drop it, let it go. Please don't argue. It won't end well.

And now here's Gene Vincent and The Blue Caps with a live performance of Be-Bop-A-Lula that features a really fine solo by their guitarist, Cliff Gallup (who has nothing to do with political polls since mama don't allow no politickin' 'round here.)