PFF grades, so controversial. And I'll admit that I've been leading the charge of distrust against them for a while now, mostly because the criteria for judgement is hidden, and it seemed like in the past there was just too much room for personal or perceptual bias. For those that don't know, PFF grades are very different than PFF metrics. Grades are scout-like grades handed out to players on film review. Metrics are weighted compilations of statistics that express a data picture about performance. In any case, I've been largely against them, especially when used to say that this player of this team is better than that player of another team, in some kind of quantifiable way. This seems to be what they are after in their marketing of the number, and it just rubs me the wrong way. I haven't though been against them in the sense that a very low grade, or a very high grade does throw up flags, and at the very least causes us to ask: "Hey, what are they looking at, what do they see?"

Well, the PFF site is in the middle of a makeover, with a nice first page, and also a great graphic expression of what makes up their grading system. Check out the grade explanation page. They are really trying to make grades as transparent as they can, and (perhaps others can help me), it seems that they have added additional layers of cross-checking that might keep grades on players from running away in either direction. Also, this normalization of grade numbers (again, they way their grades to produce a "x is better than y" usage, is not super clear to me. And one of the problems with grade comparisons is that if you have a lot of snaps, and you are good or bad, you could compile numbers in either direction in a way that undermines player comparisons. Perhaps conversion to a 1-100 scale helps with this? From their graphic is seem like it does, in fact it may obscure this problem some.

I also see some vague descriptions. Grading is "checked" by additional analysts, but it is unclear what "checking" consists of. I assume they don't have 3 different people grading each game. It sounds more like it passes through some kind of review process that is different than comparing full game re-grades. This sounds less rigorous. In any case, while a big fan and user of PFF metrics, I'm willing to try and give PFF grades a new shot, and see how close they come to my own film review perceptions. I had lots of difficulties when they first came out, and noticed big misses on game grading. Perhaps they've improved their system since then.

I would, as a serious fan, recommend subscribing to PFF signature Premium Stats. It just makes the game way more fun, and educated eyes see more of the game, get more pleasure out of the game.

But, as a little test run it seemed like it would be nice to see how PFF graders are looking at Jet player performances in the preseason. This is a nice case study because opinions are sure to be all over the place. So below are the top graded offensive players and bottom graded offensive players. Remember, because these are total grades players which more snaps (2nd, 3rd stringers) sometimes have a better chance of heading in a particular direction. Then, after the Offense is the Defense. 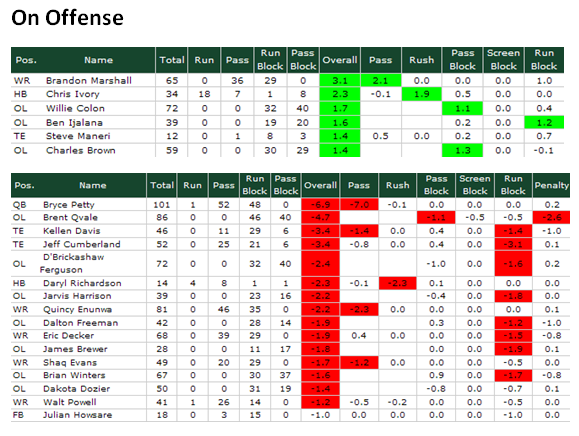 A few notes. They just HATE Bryce Petty. Even on days where he puts up good statistical numbers he gets deep down grades. Notable that Cumberland is high on the BAD list (expected), but also that Ferguson is there, and Decker. Maybe you see something that rings true (or false) with your game perceptions. 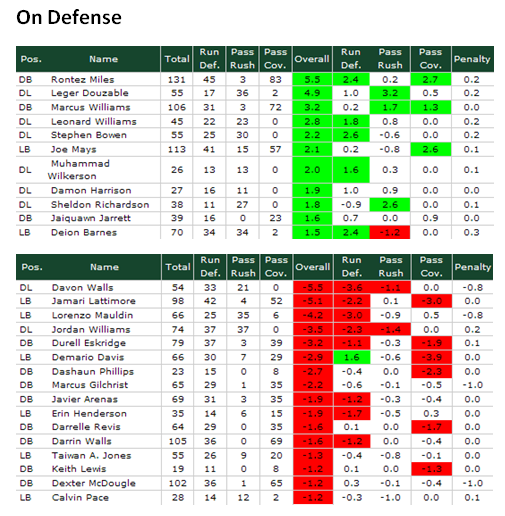 On Defense, as much as they hate Petty on Offense, they LOVE Rontez Miles. Interesting to see Bowen up there on the DL, as well as the big 4 DL. In fact with 6 Defensive Linemen in the green, it may be one of the best graded lines in the league so far, which is what we hope for an expect. On the negative side, a few big names including Revis and Davis (one a surprise).

Would love to hear what you are thinking. And again, even if you don't love the grades (I'm in a wait and see mode still, with suspicion against most uses), the metrics at PFF are outstanding.