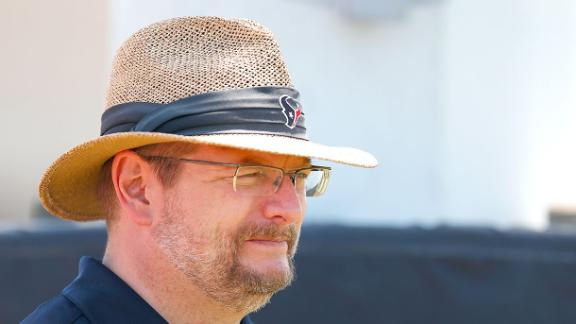 One of the most monumental mistakes an organization can make is settling for any specific talent. The aforementioned ideology can be most prevalent in the NFL draft, where teams desperately seeking an answer to the quarterback position, draft one for the sake of doing so. This common miscalculation can cause players’ on-field capabilities or projections to be ignored, and simultaneously result in drafting the wrong player. A recent example of this error occurred during the previous draft, when the Jacksonville Jaguars selected Blake Bortles third overall. Bortles was projected as a first round talent, but you would be mistaken if one believed he was worthy of that selection based on talent, and projections alone. The need for a quarterback undeniably became a significant factor into that decision. Granted, Bortles has only played one season as a starting quarterback, and it would be unfair to place a permanent judgment upon him, but he struggled tremendously during the fourteen games he played. Moreover, a secondary mistake that is commonly made is placing the recently drafted quarterback in an impossible position to succeed. For instance, when the Houston Texans were integrated into the NFL in 2002, they drafted David Carr with the first overall selection. Carr had ample talent, and was certainly capable of succeeding, but he lacked an NFL caliber offensive line. This directly resulted into Carr becoming the most-sacked quarterback in a single season of the NFL, being sacked seventy-six times. In addition, a third mistake which can occur is when a team trades up for a specific quarterback, but is forced to pay a tremendous sum. The Washington Redskins are the most recent culprits of this error, sacrificing their future, and placing all their eggs in the basket of Robert Griffin III. This transaction has obviously been disastrous outside the 2012 NFL season, and the Redskins have felt the consequences of their mistake immensely.

The New York Jets are about to be placed in a universe, where all three of the previously mentioned errors can become a reality. It is up to our new General Manager Mike Maccagnan, to not follow in the footsteps of others who have miscalculated on a player, and the situation they were going to place him in. First, Maccagnan has to truly believe either Marcus Mariota or Jameis Winston are franchise caliber quarterbacks to draft one of them with the sixth overall selection (assuming one of them are available at that position). Should this occur, Maccagnan would then have the crucial task of surrounding the rookie quarterback with an offensive-line that is more stable than what we witnessed this past season, and a better receiving core. However, assuming the likely scenario that both Mariota, and Winston are not going to be on the board at six, yet Maccagnan truly feels compelled to move up in order to snag one of them; he must carefully evaluate the package he would be surrendering (in this scenario, I presume Maccagnan is absolutely confident the quarterback is of franchise caliber).

Ultimately, and obviously, Mike Maccagnan must not error in any of these three paths. Doing so can derail a franchise for numerous seasons, especially if future assets are moved as well. If Mariota or Winston are locks in his mind to succeed greatly, by all means the trigger should be pulled; even if that requires trading up. However, if even the slightest bit of doubt about either resonates in his mind, it is not unthinkable to see a situation reminiscent of the Texans, Jaguars, or Redskins transpiring.