In most games there is a play that just sticks in your mind, for me it was this one by Eric Decker.

I don't need to tell anyone here how high I was on the pick-up of Eric Decker, one of the main reasons I loved him at Minnesota and then in Denver was his technique. He had 5 receptions for 74 yards, had one good gain pulled back by a bogus penalty and had Michael Vick been a little more accurate he would have had a touchdown. Add all that together and his début could have been a 100+ yard, touchdown performance. I was by and large, extremely impressed with Decker and here is just one play that really stuck out to me.

Early yesterday I sent the following Tweet before the Jets game:

Decker isn't that fast, but he really sells the fly route and commits the corner, which leaves him open on the button hook. #technique #nyj

As the first half was winding down with the Jets looking to move the ball down the field, I saw this play which really made me happy. Not only because it perfectly illustrated the tweet I sent, but because it showed a little improvement in Geno's game. It also showed that the receiver and the quarterback were on the same page. So lets dive straight into the images to take a look at this play: 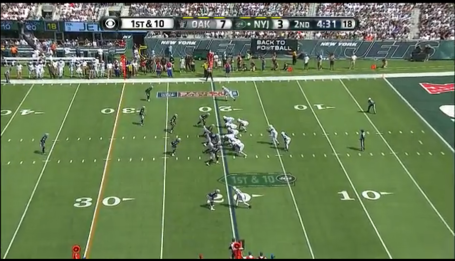 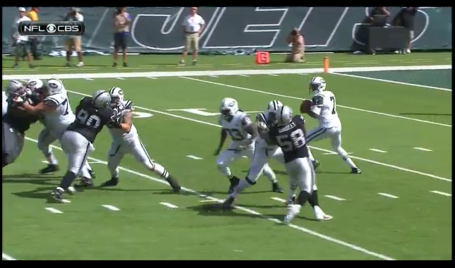 Geno's first read is to go towards Nelson, either because that was his first option or he wanted to look the deep safety over to Nelson's side, due to the pump fake, I think it was the latter. Notice that the Jets have given him a very good pocket with both D'Brickashaw Ferguson and Brian Winters maintaining their blocks.

Eric Decker gets off the line quickly and sets up to run the fly route, he has a double move at this point, hinting to the corner that he is about to break off his route and curl back towards the quarterback. 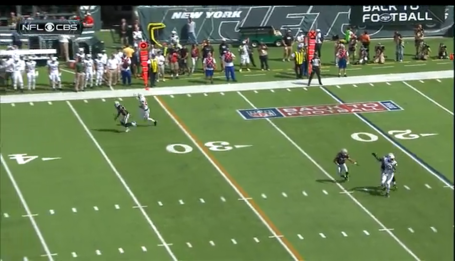 Instead of breaking off his route as he faked, he then sets back off as though he's running the fly route after all . The corner is already on his heels and now turns to try to get back up to full speed, fully expecting the long ball. Also notice that Cumberland has got the inside angle on the covering linebacker over the middle. Geno has already pump faked the high safety to Nelson's side and now the safety is seeing Cumberland over the middle. The corner on Decker's side knows that if Decker gets behind him, that's a completion and probably a 50+ yard completion, if not a touchdown. 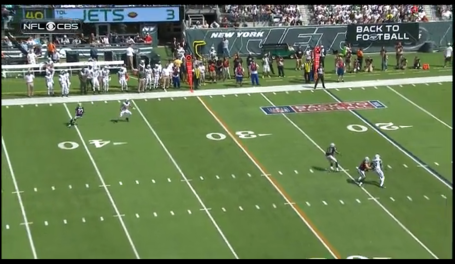 Decker then plants his foot and stops on a dime, instantly creating almost 5 yards of separation between himself and the cornerback. As you can see from the image above, the cornerback has trouble stopping as quick as Decker who's got his eyes back on Geno, ready for the pass. 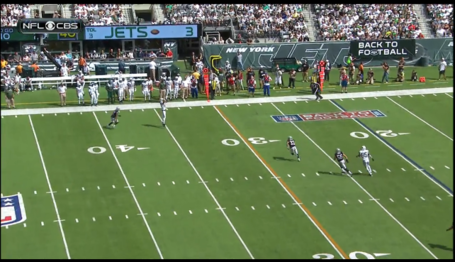 This is a well drawn up play with perfect execution from both quarterback and wide receiver. We now have a clean throwing lane for Geno, the high safety is nowhere to be seen, Decker has created 5 yards of space for himself, and he even goes up and high points the ball. He brings it down and tacks on another few YAC just for good measure.