Football season is officially back, which means we're back with the Sunday Morning Tailgate. I did this a couple of times last year and it was always received really well. Time permitting, I would like to ensure this is a weekly feature, as long as everyone enjoys it of course.

The Jets will kick-off their season today against the new-look Oakland Raiders. The Raiders finished 4-12 last season in a very tough competitive AFC West, however with a new look offensive line and rookie shot caller in Derek Carr, they will prove to be a good first test against a New York Jets team that has aspirations of play-off football. Can our offensive line keep Geno upright? Can Decker be the man to ignite our dire passing game? can Antonio Allen really play at a high level after switching positions so late? All these questions and so many more will be answered this afternoon, I know I can't wait to find out.

It's All In The History

The Jets and Oakland share quite a history. With Oakland leading the overall series with 23 wins, 18 losses and 2 tied contests. The first game between the two teams was all the way back in 1960 at the Polo Grounds with the Jets (then the Titans) losing a close one 28-27, the Raiders outscoring the Titans 14-3 in the final quarter. Al Dorrow was the quarterback that day for the Jets as he tossed up three interceptions in a losing effort, however Don Maynard and Art Powell both caught touchdowns in the game.

The Jets and Raiders have played each other four times in the post-season, with each team winning twice. The Jets took home the victories in 1968 in the Championship game and 1983 in the Divisional play-off game. Oakland took home victories in back-to-back years against the Jets in 2002 and 2003. 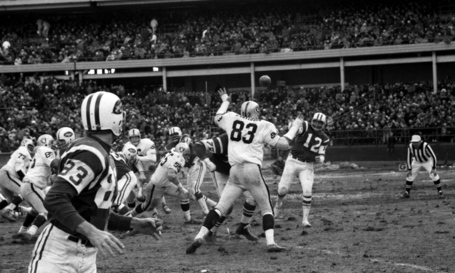 Who Wants To Watch Heidi?

I'm sure you all know about the Heidi game, and if they don't mention it during the game today, I am going to be absolutely stunned. However if you can't remember, or you just want to impress your buddies with just how well you know the Jets history this afternoon, here is a very brief explanation.

It's November 17th, 1968 and the Jets are playing the Raiders at the Oakland Coliseum, both teams look great, both teams are sitting pretty at 7-2 and dreaming of Super Bowl glory. There is 1:05 left on the clock and the Jets are up 32-29. However the game is over-running a little bit and the movie Heidi is slated to start.

Executives at NBC television decided the game was over and switched their broadcast to Heidi. People watching around the country never saw the end of that football game, had it ended 32-29, I can't imagine there would have been too much uproar. However with the Raiders scoring twice in 42 seconds to win 43-32, it meant fans missed quite a lot.

Lucy Ewbank called her husband Weeb at the coliseum to congratulate him on the win (of course not knowing the Jets had blown it) and when he answered he said: "Congratulations? what do you mean congratulations? We lost! We blew it!". The next day NBC made a public apology to everyone and the game went down in history as the Heidi game. 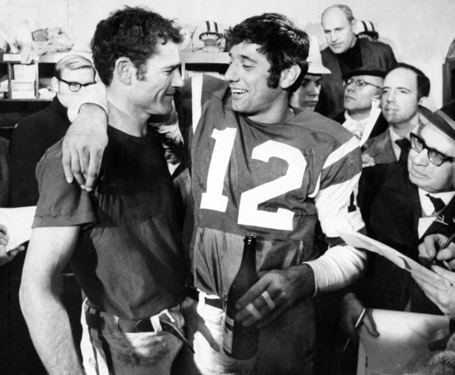 We Got Some Connections

The way the NFL is set-up right now, players and coaches move freely from team to team. Sometimes a player will go through 6-7 teams in the space of a few years. So it's really not surprising that on a 53 man roster and then a 10+ coaching team, you are going to have some connections with your opponent. So where are the connections with the Jets and the Raiders?

Howard was an undrafted tackle out of Northern Iowa in 2010 and found a home with the Jets after bouncing around with the Eagles and Ravens. He played with the Jets from 2011 to 2013, transforming from a liability to a solid addition to the offensive line. After the 2013 season, Howard elected to sign a long term contract with the Oakland Raiders to the tune of 5 years and $30 million. You can't blame the man for taking a pay-day and providing himself financial security over the coming years.

Sparano wasn't with the Jets very long. He had one ill-fated season with the Jets in 2012 as the offensive coordinator. After the Jets offence was ranked 30th out of 32 units, he was fired just one year into his three year contract. Sparano works closely with Oakland's head coach Dennis Allen and Offensive Coordinator Greg Olsen while also working with Austin Howard, who he coached while in New York.

Joey was with the Jets from 1994 to 2012. First joining the organization as a full time scout. After working for the Jets in the scouting department for 8 years, he was promoted to a national scout in 2002, then in 2006 he earned himself another promotion to Director of College Scouting, then two years later he was Vice President of College Scouting. In 2012 Clinkscales elected to move to the West Coast to be reunited with a former high school football team-mate, Oakland GM Reggie McKenzie. 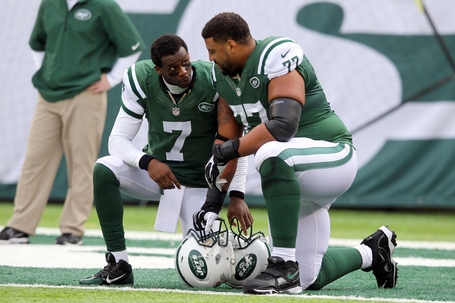 From 2009-2011, Lal worked with the Oakland Raiders as their wide receivers coach. In 2011 the Raiders averaged the 11th highest yards per game through the air in the NFL and it may have been that which prompted the Jets to make a move for Sanjay. The Jets by contrast that season were 21st. Sanjay has worked for the Jets since 2012, and will be judged on the output of the receivers this year after the Jets spent big on star wide-out Eric Decker.

What's in a Quote?

One of the things I love to do before any game, is listen to some sound-bites. Each team will be talking about their opponent during the week, so picking up some quotes isn't very difficult. Here are my top five quotes from the week

1) "This will be a good evaluator for where we are as a team," Howard said. "But I believe we can go up there and push them around a little bit." - Austin Howard, Oakland Offensive Tackle

2) "I've been waiting on this one," Richardson said. "I circled it on the calendar. We were cool when he was here. We went against each other in practice and stuff, but now it's for a whole game so I can't wait to see how it turns out." - Sheldon Richardson, New York Jets Defensive End

3) "I guess [some media outlets] had him ranked 32nd," Vick said. "That won't be the case. I know throughout our hard work and what we've set out to accomplish, that moment to jump, time to strive, so we'll see. I'm just excited for him. He's worked hard and the time has come." - Michael Vick, New York Jets Quarterback, on Geno Smith.

4) "It's a ‘next man up' philosophy around here, and we expect that whoever goes out there and plays the Mike linebacker position for us is going to go out there and play well," - Dennis Allan, Oakland Raiders Head Coach

5) "Obviously, he's a big hitter. We know what he has there, but I think he has better coverage skills than people give him credit for. I think he's got a chance to really be one of these top-notch safeties for a long time." - Rex Ryan, New York Jets Head Coach 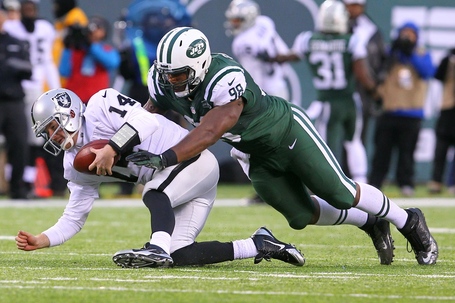 With both teams operating in the AFC, the Jets and Raiders tend to play each other very often. The last meeting came just a year ago as the Jets ran out winners 37-27 which also happened to snap a three game losing skid for Gang Green. Geno Smith was solid throwing for over 200 yards with a touchdown (Kerley) and an Interceptions. Chris Ivory and Geno Smith both rushed for touchdowns as the offensive line manages to create lanes and keep Geno upright, the rookie QB was sacked just once. I remember that game as the day Geno realised he could use his legs, scrambling often to buy himself more time and ending the game with 5 rushes for 50 yards and a score.

Although the Jets put points on the board offensively, it was the only game where the defensive line allowed a 100 yard rusher. Oakland running back Marcel Reece finished the day with 123 yards on 19 attempts including a long 63 yard touchdown score. The Jets moved to 6-7 that day while pinning Oakland back to 4-9. Of course neither team managed to make the play-offs.

Three Keys To The Game

1) Get to the rookie early and often. I watched a lot of Derek Carr last season and he is a tremendous QB when he is given time. However if you get pressure on him and close the pocket quickly, he panics and his technique goes out the window. I truly think that's why he fell, NFL teams realised that he doesn't deal with pressure all that well. We need to bring blitzes from inside, outside from corners and safeties, delayed ones, full ones and just get him on the edge. If we can do that, I really think we can give him a début he will want to forget.

2) We have to put pressure on the running game of Oakland. If they can establish the run early, take the pressure off the QB and utilise some play-action, we could be in trouble with our inexperienced corners. Oakland have invested in their offensive line and they have some impressive backs in Darren McFadden, Maurice Jones Drew and the fullback that gave us so much trouble last year, Marcel Reece. They averaged 125 yards per game last year, good for 12th in the league and with a better offensive line, that's their strength.

3) Give Geno confidence early. Oh course with Powell, Ivory and Johnson, we are going to want to get our own run game going. However getting Geno some good early completions will do him the world of good. Give him some high percentage completions to his new shiny Wide Receiver (Eric Decker) and the tight end combination of Cumberland and Amaro. If we can boost Geno's confidence early, then we will be on for a good game and that heralded, opening day victory. 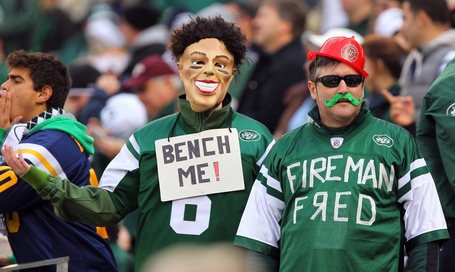 As many of you will remember, the Jets asked their fans to vote on who they wanted to lead the J-E-T-S chant at each home game this season. Fans submitted their videos and the rest of the fan-base voted on it. This year, eight different fans will lead the chant and first up is Derek Tabacco from Staten Island. Two of the originators of the chat at Shea Stadium, Larry Mack and Don Schaeffer will be on hand to lend a hand and offer some guidance.

Obviously this has all come about from the retirement of Fireman Ed, who decided to hang up his hat as chant starter and just enjoy the games instead. So best of luck to Derek, and lets give him some good support.

One For The Grill

Many of you will be heading up to the stadium later today to cheer on Gang Green. So I'm going to kick things off with a tailgate chicken recipe that was sent to me by Captain Morgan's PR company. 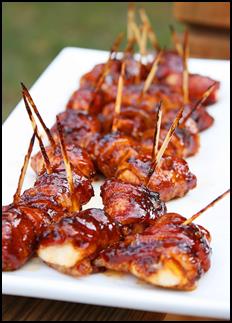 Instructions: Preheat oven to 300 degrees. Line a large baking sheet with aluminum foil. Spray lightly with cooking spray. Wrap each chicken piece with a small strip of bacon. Secure with a toothpick and place on the baking sheet. Brush with BBQ sauce. Bake for 15 minutes. Remove pan from oven, brush bites with more BBQ sauce, and return to oven. Bake for 15 more minutes. Serve warm.

Instructions: Combine all ingredients in a medium saucepan over low heat. Bring to a boil. Reduce heat and simmer 30 minutes, or until thickened as desired. Stir occasionally. Use immediately as you wish, or store in refrigerator until ready to use.