With a 1/4 of the season over it is maybe time to take a look at which Jets are performing at very high levels, and also those that are near the bottom. Some of these may be obvious, but some may be interesting. If you are in the top 5 or bottom five at your position in a statistical category (an achievement worth noting). Collecting these players together creates a certain talent picture of the team. Of course NFL teams need lots of good performance in the middling range, but things you excel at (or suck at) can more or less outline the capabilities of your team.

I'm drawing from Profootball Focus' excellent data, usually using the PFF50 dataset, though expanding or shrinking it when necessary. What I want here is a kind of talent and capability snap shot of the team.

Geno and the corners, obviously bad and we are suffering against the slot. Amaro has been pretty effective, but in a very limited role, while Mangold has yet to give up a pressure. Ivory has been top of the league dynamic as a runner, bottom of the league in the passing game. Wilkerson killing it against the run, only so-so rushing the passer, Richardson one of the best pass rushers at DE so far. Coples has been uncharacteristically weak against the run, but also uncharacteristically strong in rushing the passer, while Pace also has been weak against the run, and solid in coverage. Harrison is awesome stopping the run, again, but awful pressuring the passer, again. Landry hasn't missed a tackle, Pryor's missed 3 in the passing game already. That's not a lot for a team in terms of top 5 talent.

There isn't a lot to write here as Geno woes have been talked about better elsewhere, but Geno finds himself with the 2nd worst NFL rating, and the 4th worst Accuracy % when under pressure in the league:

Cornerback, aside from Quarterback, is probably the most questioned position, mostly due to the failings of the Jet boy-wonder GM to address the position adequately, doing such a poor job he at least left the impression that he's somehow undermined Rex Ryan who notoriously asks a great deal from his corners. Rex seemed to really fight off the weakness by an aggressive blitz approach that harkens back to days of old, but this hasn't kept some of his CBs landing in the bottom 5 in some categories.

First, below is the note that the "washed up" Antonio Cromartie continues to appear in the top 5 of least frequently targeted, and completed upon cornerbacks in the league, something that compliments the fact that Allen (his replacement) is in the bottom 5 of the same metric (bottom 5 rankings are inverted, where "1" indicates the worst in the league). Basically we have swapped out a top 5 player for a bottom 5 player (in a bit of an over-simplification) 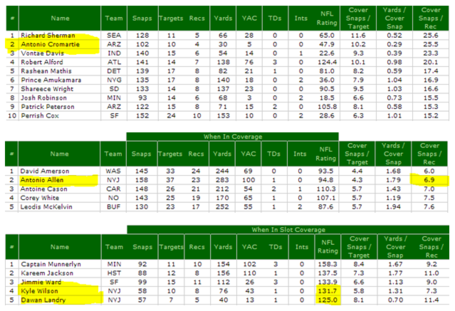 In a lovely little twist, Kyle Wilson who has had two very nice statistical years in a row for the Jets has been drowning when covering the slot. Interestingly enough Rex has been using Landry over the slot almost the same number of snaps. They BOTH find themselves in the bottom 5 in the league in NFL ratings when covering the slot. Note, Landry may at times be covering TEs in the slot as well (are the Jets being attacked by TEs in the slot more frequently, or are the Jets defending the slot differently this year).

This is a little bit of a vanity stat, one we had to dip down into the PFF25 to get, but Amaro has been extremely effective in the slot, in fact leading the league in yards per route run from there. Part time players can do well in limited stats like this, but hey, number 1 is number 1. This big production in his 26 slot routes also gets him into the top 5 of yards per route run over all for TEs:

Mangold leads the league at center, not allowing a single pressure on Geno in 156 pass blocking plays thus far:

Mo is 3rd in the league in Run Stop % which is a big deal because several Jets have fallen off in their defensive run numbers from last year, while Richardon is 6th (okay, not top 5) in PRP, and area where he really was sub par as a rookie. Mo is only middling in pass rush this year, so Richardson's pressures are much needed.

Ivory has showed himself to be a better back than Chris Johnson, as several of us argued he would, at least as a runner. He's in the top 5 in elusiveness rating, in fact leading the league, as well as in the top 5 in Breakaway %

But he is a serious liability in the passing game, in the bottom 5 in both Pass Protection and in Drop Rate%:

Harrison is still pounding out running backs, in the top 5 in Run Stop %, but he is dead last in pressuring the QB, producing zero pressures in 64 rushes. He is like the anti-matter version of Nick Mangold. One of the reasons why he is getting only 46% of defensive snaps this year:

Outside Linebacker - Coples and Pace

One of the more troubling dimensions of the Jets Defense has been a slippage in Run Defense from various defenders, most notably Coples who was good here last year, but also Pace and Harris. Coples actually has the 2nd worse Run Stop % in the league, and Pace the 6th worst (you can see it in the first graphic below). The good news on Coples though is that he's finally getting nice pressure on the QB, 6th in the league at his position. This seems due to a larger variety of assignments, and that he's seeing 75% of snaps, unlike the high 80s to 90s often of late last year. In the 2nd graphic, you can see he he really thrived in pass rushing from the left side of the line (PRP over 18), while last year he was extremely weak from that side (PRP 6.4, 3rd graphic) 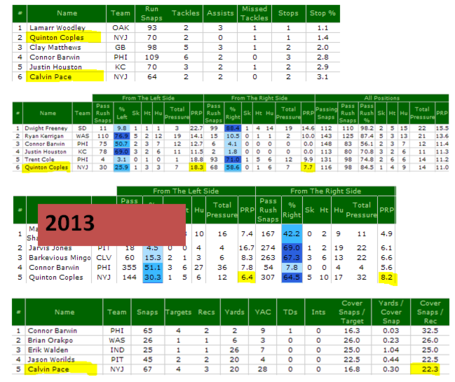 Calvin Pace on the other hand is holding the fort in pass coverage, in the top 5 in the league in frequency of completions when in coverage.

Coples only has 2 tackles in 70 run snaps, missing 1, putting him 2nd worst in the league in tackling efficiency. He was a monster at times against the run last year, but he is not a force this year, as yet. Perhaps it has to do with how he is being deployed.

Landry hasn't missed a tackle thus far this season, Pryor finds himself 6th (okay, not top 5) in the least receptions per cover snaps.

Yet Pryor has missed the 2nd most tackles in the league, in the passing game. 3 already, and Landry's weakness against the slot has already been mentioned.

Walls has had some trouble tackling, missing a fair share of tackles, but he also is in the top 5 in Run Stop %, offering great run support at times.

These are all performances which are neither top 5 nor bottom 5 in the league, but close to one or the other. They help fill out the talent picture of the Jets:

Notes, weakening against the run:

There may be errors.