So we're back to our Sunday afternoon slot, and I for one am delighted about that. I don't know what it is about Monday Night Football games, but I just really don't enjoy them, especially when we lose. We're now sitting here at 1-2 and I fear that if we lose today we could spiral out of play-off contention.I would love to say someone like the Oakland Raiders were heading into town, I'd even take someone like the Bills, but unfortunately it's the high-powered Detroit Lions. Join me below for some essential Sunday morning reading.

I won't lie, I'm nervous about today. If he plays, the thought of Calvin Johnson lining up against Walls or Allen scares me. Even if you shade a safety over to him, he can still beat double coverage and that leaves the likes of Golden Tate, Reggie Bush or Joique Bell in single coverage somewhere else on the field. The Lions are beatable, without a shadow of a doubt, if you can get into Stafford's face and force him into mistakes, then establish the run game (easier said than done), you'll stand a good chance. However we'll go into more detail in our keys to the game segment.

I was doing my usual Jets reading last night and I saw some beat reporters really playing up the Geno job security angle and the whole circus aspect came back into play, I'm not sure what the obsession is with this 'circus' that Jets beat writers have, maybe we should club together and get them some tickets to an actual circus to fulfil their desire. Maybe I'll start a kick-starter campaign and get back to you all with the details later.

It's All In The History

With the Lions being a NFC franchise, we don't have a great deal of history between us, and obviously we've never faced each other in the post-season. Saying that, the all time record between the two clubs is finely balanced at 6 wins each. The Jets have scored a few more points than the Lions in the all-time series, 245 to 234.

The first meeting between the two clubs was in 1972 at Tiger Stadium, Detroit. With the Lions pounding on the Jets to the tune of a 37-20 victory. The Jets would define the word average in 1972 finishing with a 7-7 record and missing the post-season under coach Weeb Ewbank, although the Lions themselves only finished with a slightly better record at 8-5-1.

The team would have to wait 7 years until 1979 to play again, this time at Shea Stadium and in front of 49,612 fans the Jets dominated the Lions 31-10 with Richard Todd leading the team to victory. Despite winning three straight games to end the season, the Jets would again miss out on the post-season with a 8-8 record.

Between 1991 and 2002 the Jets held a 4 game losing streak to the Lions, that is until the 2002 game which saw Chad Pennington complete 21/26 passes and throw for 4 touchdowns, since that day, we have our own mini winning streak having won the last three games. We don't play each other all that often, but the Lions have not defeated the Jets since 2000. 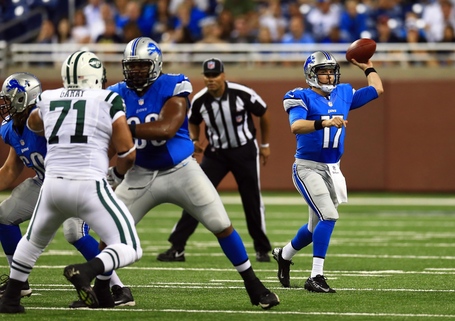 We Got Some Connections

Mosley was a 6th round draft choice of the Vikings in 2005 and after having an impressive rookie campaign for a 6th rounder, he was traded to the Jets in 2006 for Brooks Bollinger and an undisclosed draft selection. Bollinger only ever attempted 68 passes with the Vikings over two years and Mosley only started a handful of games for the Jets, registering a sack here and there, making a play every now and again but largely not doing enough to establish himself. Following the 2008 season, Mosley signed a 2 year deal with Cleveland, and if I remember correctly, we didn't make a big push to keep him.

I have to admit to being a Digs guy, He was never very good in coverage but he certainly knows how to deliver the hammer. I was a little sad to see him go in 2010, especially because he moved on to the Patriots, however he's found himself on the Lions roster (via Baltimore) and although he hasn't recorded a tackle this year for the Lions, mainly because he hasn't been on the field, I still have a lot of time for him, he spent three good years here including the two AFC Championship game years in 2009 and 2010.

Don't ever say we're not thorough. Apparently Nate Ness was here in 2009 during the off-season and he now currently resides on the Lions practice squad. I really can't remember him spending time with us, so it must have been short lived.

I rate Leger as one of our best back-ups on the roster, the depth on the defensive line is excellent. I wasn't aware that the Lions actually signed him in 2010 during the off-season, but cut him before the final 53 was announced. Their loss is our gain, although he's by no means a star, he's a very good rotational guy to have on the roster and he makes a play here or there as well. 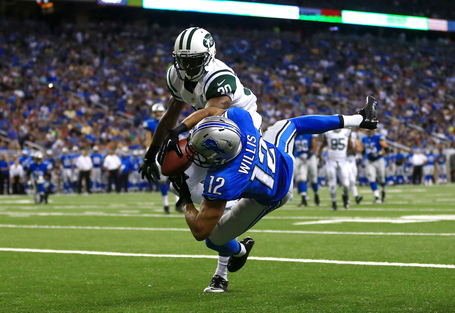 What's In A Quote

Every single week I'll pick out five quotes ahead of the game that I've liked or I believe to be important for one reason or another. It can come from a player, a coaching staff member of either team or just a commentator.

2) "He responds quickly to treatment. He bounces back pretty quickly for the most part. What would ordinarily take some guys a little bit longer, he seems to be able to fight his way through it" - Lions HC Jim Caldwell on Calvin Johnson

3) "Hamstring's feeling good," Decker said. "Got out there, finally got to practice, definitely night and day from last week. Happy with the way I've progressed and looking forward to getting out there Sunday." - Eric Decker on his injury

4) "I try not to put my private life out there as much as I can and don't pay too much attention to what else is going on," Stafford said. "There's so much in my life that is public and talked about every day without my control, I'd like to be able to control as much as I can." - Matthew Stafford on his personal privacy

The Jets came away from Detroit with an overtime victory the last time the two teams met in 2010, Detroit were a much different team back then however. After falling behind early to a Brandon Pettigrew TD, the Jets responded with a field goal and then a long 74 yard touchdown from Mark Sanchez to Braylon Edwards. Detroit took the early 3rd quarter lead with a Stafford touchdown run and then opening up a 10 point gap in the 4th quarter when Stafford connected with Nate Burleson on a short 2 yard score.

However with just under three minutes to go, Mark Sanchez's 1 yard run tied the game at 20 and forced the teams into overtime where Nick Folk's 30 yard field goal gave the Jets a 23-20 win. Sanchez did enough not to lose the game with the Jets rushing for over 100 yards and Santonio Holmes having a big game of his own.

Brad Smith constantly gave the Jets good field position by averaging nearly 30 yards per kick-off return and the Jets offensive line allowed Sanchez time to make plays with the young Jets QB only being sacked the once. It was a good game and a great victory and I don't need to remind you that we went to the AFC Championship that year. 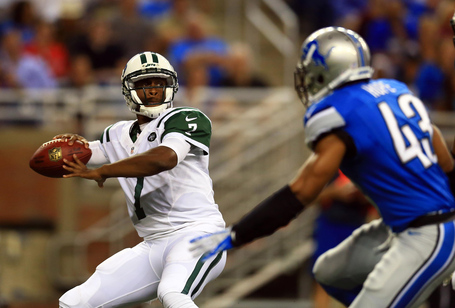 Three Keys to the Game

1) You have to find a way to limit Calvin Johnson. If you have to give him double coverage every single snap, then you do that. Make the other receivers and the other Lions beat you. Get physical with him and if he's playing at less than 10% you hit him as hard and as often as you can (all within the rules of the game of course) but let him know that he's going to have a physical day.

2) Target the tight-ends. Detroit have a fantastic offensive line and they have decent corners, but their safety play and coverage from the linebackers isn't as elite as the rest of the defense. So you get Cumberland and you get Amaro and you throw over the middle. You try and get one of them isolated on a linebacker and you keep going that way. If we can get them integrated into the game early, we could find a lot of success.

3) Limit those turnovers. The way to beat a good offence is to keep them off the field and don't give them a short field. Two key aspects. If they are going to put points on the board, make them go 80 yards every time to do it. If turn the ball over and force them to only have to travel 30-40 yards, we're going to be in trouble.

1) After a loss to the Seattle Seahawks in 1979, Jets head coach Walt Michaels informed Jets punter Chuck Ramsey that he could fart further than he could kick after he had a punt blocked. Michaels called Chuck out in front of all the players as the pressure mounted.

2) The Jets last ever game at Shea Stadium was watched by 53,996 fans as the Jets got hammered 34-7 by the Steelers. The following year the Jets moved into Giants stadium

3) In a 1986 Monday Night Football game, the Jets and Broncos combined to use four quarterbacks, 10 quarterback sacks, 22 penalties and just 490 yards of total offence, the Jets would win the game but it wouldn't be one to remember.

4) In 2004 Football Outsiders named the 1991 Jets team as one of the worst play-off teams of all time. The jets quickly exited the play-offs with a wild-card loss to the Houston Oilers.

One For The Grill

My normal source for tailgate food hasn't been in contact this week, so I had to go searching for something that looked delicious instead! 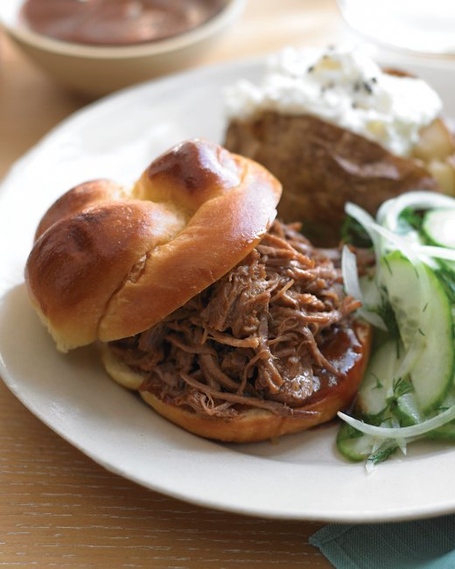 Preheat oven to 350 degrees, with racks in lower and upper positions. In a small bowl, combine sugar, cayenne, 1 tablespoon salt, and 1 teaspoon pepper.

In a medium bowl, combine vinegar, garlic, and 1/2 cup water; pour over pork. Cover pot, and place in oven on lower rack. Bake until pork is very tender and separates easily when pulled with a fork, 2 to 2 1/2 hours.

Transfer pork to a work surface, reserving pan juices. With two forks, shred meat. Transfer to a large bowl, and toss with pan juices to moisten (you may not need all the juices). Pile pork on rolls, and top with barbecue sauce, if desired.