Time for Marty to bring back the sprint draw

Going back to an Eagle favorite

Share All sharing options for: Time for Marty to bring back the sprint draw

Prior to becoming Rex Ryan's offensive coordinator, Marty Mornhinweg spent a decade coaching under Andy Reid and the Eagles West Coast Offense.  His offense hasn't completely resembled what he ran in Philadelphia, which is to be expected when you have a different type of personnel. One play that failed to make the trip up the Turnpike, unfortunately, was one of my favorites: the sprint draw.

John wrote an article earlier this week about how good the interior DL of the Lions is; how they have stuffed the run, tied up blockers, and just been a disruptive force. However, having followed Suh and Fairley for a while, to me their natural instinct is to get upfield. These guys want to beat up the QB. I think they are susceptible to plays to take advantage of upfield aggressiveness like screens and draws.

The essence of the sprint draw is, as with all draw plays, deception. The draw is supposed to look like a pass play, before the QB gives the ball to the back. The sprint draw adds a layer; it's designed to look like a bootleg or a "sprint action" with a moving pocket. However, rather than throwing the ball into a half field read, the QB will put the ball in the RB's stomach. Allow the high tech graphics to demonstrate.

This is from an Eagles vs. Bears game, Week 9, 2011, 3rd quarter.  The Eagles have already conquered step one: They gained 8 yards on first down on a Vick scramble and it's 2nd and 2. The beauty of 2nd and short is that your entire playbook is open: run, short pass, deep pass, play action, screens, draws, and gadget plays are all on the table. The Eagles line up here in "12" personnel- meaning 1 RB, 2 TE, and 2 WR. 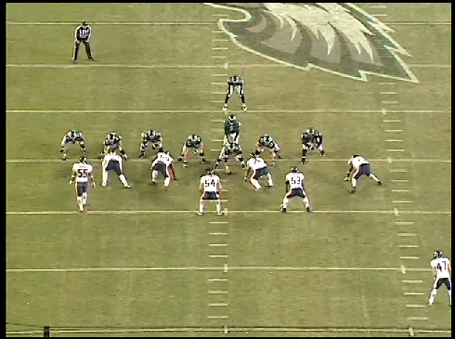 At the snap of the ball, Vick sprints out to his left as though he's running a quick roll out to throw, which is something the Eagles often did on pass plays. Using sprint action or rollouts earlier in the game will help set this play up. McCoy floats to his left as though he's going to pass protect. Eagles LT is going to go one on one with the RE.  The rest of the OL is funneling the Bears DL to their left.  The Bears DL is clearly trying to be aggressive and get upfield to get some pressure. The Bears linebackers are a different story, as they are trying to read and react. The Bear secondary is in off coverage and backpedaling at the snap. It appears as though the Eagles are trying to get Vick on the edge and give him the option of getting it to Maclin (split wide left) or possibly run for the first.

Rather than take it to the edge, however, Vick drops the ball in McCoy's gut. No one on the Bears DL is in position to make a play, as they have all overran it trying to get upfield. This has allowed both Eagle TEs and an Eagles lineman to get to the second level and block the linebackers, who are still reading the play and have already backpedaled too much. The secondary, far away from the ball, isn't going to get there anytime soon.  The safety, I believe it's Conte, is still backpedaling 20 yards from the LOS when McCoy gets the ball.

One Bear outside linebacker manages to play this pretty well, as he gets a good look at McCoy, but of course McCoy is probably the shiftiest back in football. He whiffs and McCoy is off to the races. Watch Jason Peters motor up the field after the Chicago RE takes himself out of the play chasing the sprint action of Vick. He's going to take out Conte who is approaching in the screen at the tail end of the gif. 33 yards later, McCoy is in pay dirt. Touchdown Eagles.

The Lions have some thoroughbreds in the stable, no doubt. You probably aren't going to beat them very often. You have to out scheme them, and let them beat themselves. Use their own aggressiveness against them. Marty has used very little of the sprint draw (if any?) in New York, despite having a QB with good foot speed, and despite using quite a bit of sprint action with Geno. While the Jets don't have Shady McCoy, or even a close substitute really, I think this is a good play for a Chris Ivory, who has some explosion and who is one of the 5 best tackle breakers in football. Perhaps Marty should bring back this gem and allow Suh and Fairley to beat themselves.