GGN Chalkboard: A Few Key Plays of the First Half

Let's take a look at three big plays that shaped the first half shall we?

Share All sharing options for: GGN Chalkboard: A Few Key Plays of the First Half

The Jets lost the game in Chicago, but how bad did they look on tape? The answer is a mixed bag.

Xes&Os already covered the first pick 6 , and frankly I didn't feel like looking at a play that can be summed up by Geno making a poor decision and it being the only reason for the pick 6. However, I chose 3 big plays, which were key in the first half including two TD's and a turnover... let's get to it.

The first play I looked at was a Cutler to Bennett TD. The situation was a third and goal from the 7, and  Gruden nailed what the Jets would do. They only rushed 3 and dropped 8 in coverage and the Bears through 5 guys into the pattern. 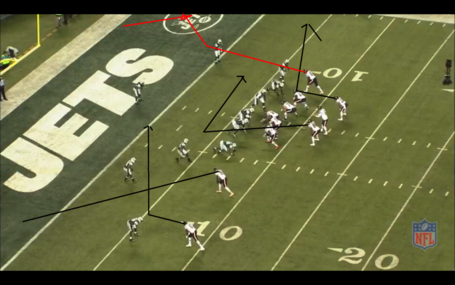 Let's take this step by step here. The primary WR's are on the bottom, Cutler wants to hit the slant route the outside WR is running. Both backs run routes, and eventually Bennett in red will get the ball, but this play takes awhile to get going and has numerous negative things evident on tape.

The Jets have issues with the crossing routes at first. Credit to the safety (I believe it's Landry) who eventually helps out, because at one point Cutler did have a lane to his primary WR. 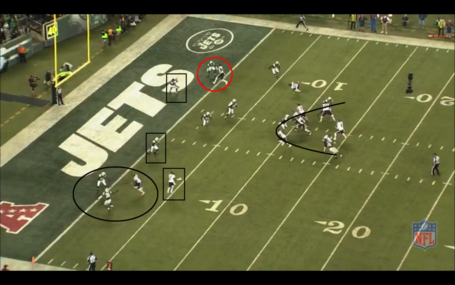 There are two things to notice here. First, the Jets once again double team the inside WR running to the corner. Notice also with the three man rush, there's a huge pocket for Cutler to sit back in. I like the fact the Jets tried something different, but the pass rush here was non-existent and really hurt the play. Second, Bennett is covered by two guys, but two things happen. Pryor shifts his attention to the middle of the field and more towards the side of the crossing WR, and Walls jumps to the outside shoulder of Bennett.

As a side note: the Bears revisited this play successfully a few drives later hitting that crossing route over the middle. In that case, the corners were in man, so the safety couldn't save a miscommunication. Back to the play: 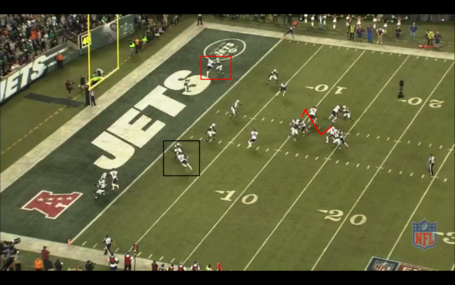 A few seconds later, you see the safety cutting off the slant route. Cutler's pocket begins to shift and he takes a step forward and then turns to his right towards Bennett's side. Walls here is on the outside shoulder. Pryor has seemingly disengaged Bennett and focused on the QB. That's all Cutler's going to need here. He needed a lane to throw, and the Jets defenders have given it to him. Bennett ended up planting and taking a step or two back to the middle of the field causing Walls to end up a few steps away. 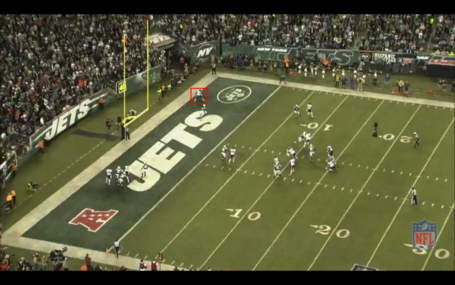 Final result: Cutler breaks free and makes a relatively easy pass to Bennett. He threw a laser to Bennett, who only needed a few feet of separation to make the catch.

I'd like to blame Walls here for jumping to the outside, but really that's what he probably should do with inside safety help. Pryor also deserves some blame for hanging out in the middle of the field without covering anyone in particular. And enough blame is still left over and should go to the DL for having no pass rush. What ends up happening on this play is the Jets are down 14 early thanks to a broken play TD.

And then the opposite happens: The Jets get their act together, and put together a few drives. One ended with a beautiful strike from Geno to Kerley, which is the next play that gets put under the GGN Chalkboard microscope.

It's actually a pretty neat design. The Jets bring Kerley in motion from the far flanker into the slot and he continues his route uninterrupted into the center of the field. The outside WR on Kerleys side runs a simple fly pattern. On the opposite side of the field, One WR runs a square in route, and the other slot WR runs a corner route. Finally Cumberland the TE runs a square in route. 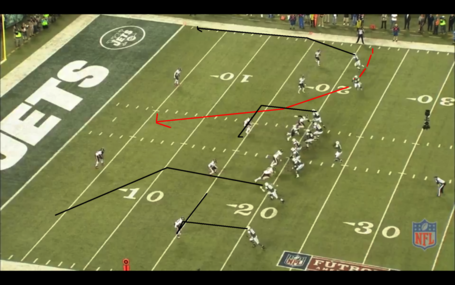 Kerley's route is a simple seam route designed to find a hole in the defense. If it was cover 3 I have a feeling he'd cut the route off and plant in the middle of the field short of the safeties. However, n this play, the Bears play one of the most simplistic cover 2 coverage zones you will ever see. The Bears could not have run a more perfect defense for this particular play and I've shown you below the setup. 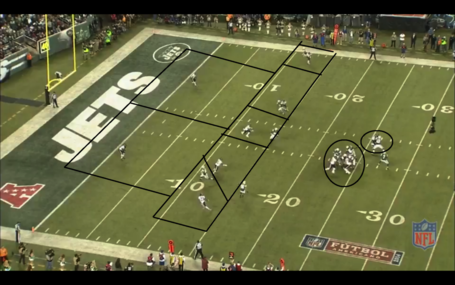 The breakdown of the defense is pretty simple. The Bears break the field into 7 zones with 4 man rushing. Two men play deep halves of the field, while the other 5 defenders in coverage including the LB'ers and corners, are playing a 5-10 yard hook zone. The Bears LB'ers and corners allow the routes to go by them without getting much of a bump on the WR to knock them off the routes. Kerley running the seam route is going to split the zone between the hook zones and the deep safety zones. Side note: looking at the blocking, the Jets do a great job of keeping Geno upright and giving him space to throw. 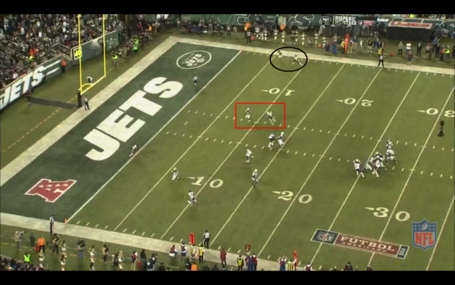 It's worth pointing out: the cover two got beat up top too (black circle), with the WR who I believe is Chris Johnson running the route up the sideline. There are two spots you can beat a cover two with: routes up the middle seam and the sideline routes. Additionally now you see the issue with not bumping Kerley as he got off the line of scrimmage. He and the nearest defender are in red, while both safeties are stuck in the middle of the field covering two guys running deep routes with the short zones letting them fly by. Gruden can blame the other safety all he wants, but really the LB deserves some heat for simply waving at Kerley as he goes by. 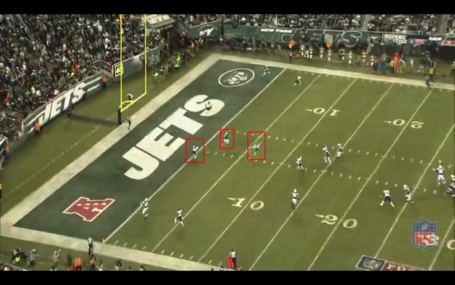 Geno drops in a perfect pass in between the LB and the safety which leads to Kerley getting walloped but ultimately scoring. In essence, the Jets play calling here was spot on and was a perfect counter to the Bears defense. MM gets a cookie for this play call.

But alas, GGN chalkboard also found something interesting. The play should have been called back, check out Willie Colon's "block" in the image below. 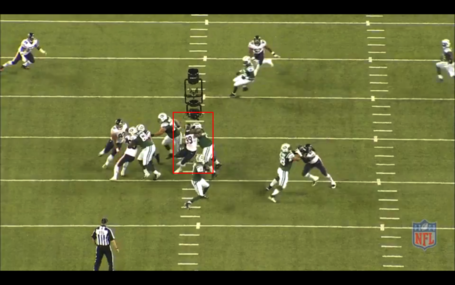 Look you can blame the refs all you want for errors , but it's not they hate the Jets... They just seem to be incompetent. How the back judge missed that call, I'm not sure but that is by far a penalty and the ref seems to be staring dead at the holding call.

Last play for this edition of Chalkboard is the Jets getting to Cutler and causing a fumble that was returned for a TD.

The Jets bring the kitchen sink on this blitz with only 3 guys in coverage and 8 lining up on the line of scrimmage. Two things must be noted here: for everything you hate about David Harris, the man made this play. He jumped the snap count and took off after the QB and would not be denied. Second, Rex's blitz here had a little stunt that freed Harris to get to the QB. So credit to Rex for the play design and Harris for the flawless execution. 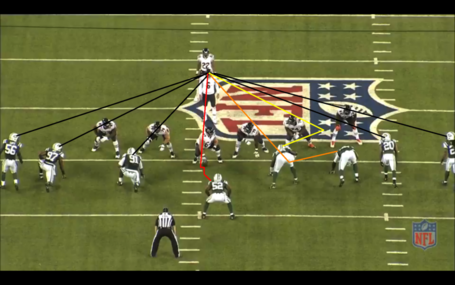 This is again a jailbreak blitz, Harris goes dead over the center. The right DT And DE run a tackle end stunt, otherwise everyone rushes straight ahead. The inside DT runs right at the offensive tackle, and the DE loops behind the DT and goes over the guard. While you may think this is trivial, that stunt is what causes Harris to go in alone without ever being touched. Below is the blocking assignments and you can see the center gets the DE looping to the inside and leaves Harris 1 on 1 with Cutler. He probably saw the DT go outside and wanted to make sure the looper was covered, totally forgetting that Harris was dead over him. 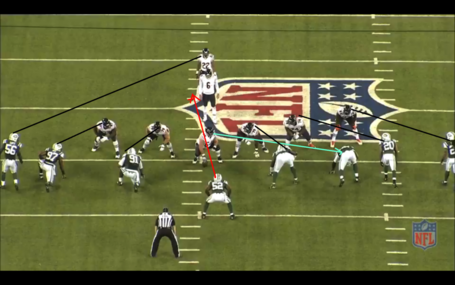 Lesson learned here for the Bears, if you leave Harris unblocked and pick up the nose tackle stunt, bad things will happen, even if the referees call back a TD. That's all I have for now, hope you enjoyed this GGN chalkboard.