While I wait with everyone else for the ALL-22 coaches film to be released by the NFL, just a short little post on Geno and the Bears game. One could say the game really came down to those two INTs, one that put 7 points on the board, one that took 7 points off the board. Aside from just how much they affected the game, what do both throws have in common? Well, Geno launched himself in the air...and both throws were highly inaccurate. The two of them below. 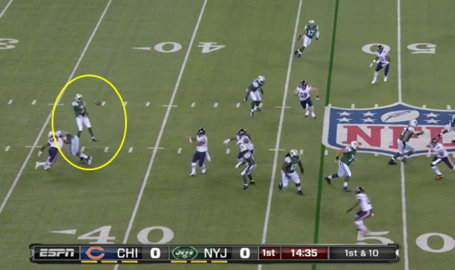 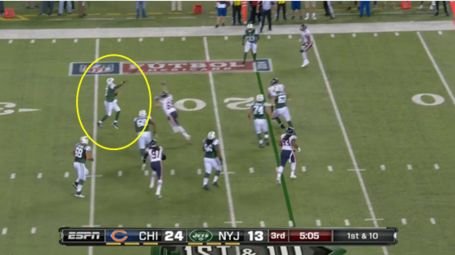 Gruden pointed this out on the INT in the endzone, but I noticed it on the pick 6 too. There they are, practically bookending the game. Open and shut. In the first play the jump seems innocent enough. In a way the throw was (kinda) accurate, but only accurate if CJ doesn't bumble into a Bear first, and if the safety isn't staring Geno down, sitting in a shallow zone. The Geno Jump though says something. When Geno jumps, I contend, he is feeling it. He's feeling athletic. It's early in the game, he kind of rushes through his fake to one side (receiver wide open), and then rushes to throw. He doesn't actually SEE the play, he is feeling it. His little jump is just that little panache you put on a play, like the fall away on a sweet swoosh jumper. But...that is the problem. Does he make this throw if he keeps his feet planted? We'll never know. But if his feet are planted, his head is in a different space.

In the second INT he just has too much belief in his body. He is already going against his throwing arm, and then he jumps, even further decreasing his leverage. This is backyard stuff. And he doesn't SEE the play, he tries to just make the play. His feet, metaphorically, just aren't on the ground.

The thing about Geno, and the thing that gives him a tantalizing ceiling, is that he is a born playmaker. He is used to being one of the best, if not the best athlete on the field. You can see it when he runs, he has a little zig to his zag, a you can't touch this. Ever notice how many times he gets a late hit out of bounds when he runs? He just has that little something extra that frustrates defenders - one second he's in bounds, the next he's 4 yards out. He is used to just being able to panache the play. The problem is, just because you can do that in high school, and then college, it doesn't mean you are physically able to do it in the pros. In fact, NFL cuts are filled with guys who had great, physical success at lower levels, and even Geno's teammate Vick - who was far superior as an athlete to Geno, a generational athlete really - barely was able to get on the plus side of quarterbacking with his "I'm the best athlete on the field" talents.

With a player like this it's going to be high risk, high reward for a franchise. You aren't going to turn him into a different sort of player who has a different sort of relationship to his body, his own athleticism and confidence. You just have to manage him. You have to get his feet on the ground more often than not. But there are going to be times when he just is going to jump. You have to pray that he is learning fast enough about his limitations, about the speed and sophistication of defenses, that when he jumps, he nails the play. That is where his ceiling and ultimate value lies.

So far Geno has been given a pretty safe QB play call schedule. In the Raider game he throw almost continuously to wide open, short route receivers. Despite this though, Geno is almost last in the league in PFF rating (which takes out drops, spikes throwaways and YAC): 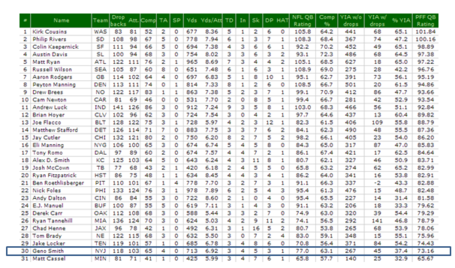 And he is last in the league in accuracy under pressure, in the 30s%: 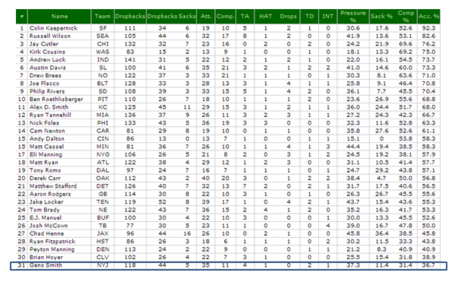 The thing about Geno is that he's precocious. People are so fast to get excited, and then so fast to write him off. It would have been nice if Idzik had given him more weapons (DeSean would have been nice, 8th best WR rating thus far), and more protection. It never made sense to me to not throw all kinds of advantages Geno's way if you have so much riding on his success or failure. What should really be considered is if 3 games with Vick at the helm would be a favor to Geno. It would allow him to focus on the QB he wants to be, and come back in the season stronger, more grounded. It would be so much better to remove him when things are going okay, than after possible disaster. If he starts to implode, it could be a big implosion. Teams are already starting to take away the short zones (Munday was sitting as a safety in the shallow flat, and didn't budge when Geno faked left). The "safe" throws are going to be taken away. Geno will start having to "make plays" which is right in the danger zone where the Jets don't want to be, this early on.