He is bad, and he should feel bad.

Share All sharing options for: Jerome Boger and the Terrible, Horrible, No Good, Very Bad Officiating

Complaining about the officiating in a football game is a tricky proposition. Calls go both ways, and a game should never come down to officiating. Blame the officiating for your loss, and you're a whiner. As a result, I want to make a few things very clear. The first is that the New York Jets lost this game for a multitude of reasons, in large part due to self-inflicted wounds. You can't win with pick-sixes, fumbled punts, and dropped interceptions.

The second is that the officiating was, in particular, fairly terrible. I don't mean to suggest that the Jets did not receive any favorable calls; of course they did, for example, the questionable fourth down challenge on the final drive. But a few of the calls made against them were particularly harmful, and I believe, wrong. They were the calls referees make when they're in over their head, and that's exactly what happened to Jerome Boger against the Chicago Bears. Officiating is a part of the game, and as a result, it should be scrutinized as such.

For some context, you should read up about Boger, who many believe is one of the worst referees in the league. As David Harris said after the game, "What else is new? It seems like we’re playing against two teams out there sometimes.’’

There were three plays that I would like to highlight, although there are certainly more, such a delay of game that should have been called on Jay Cutler:

I slowed this GIF down as much as I could, but it's still a little hard to see. In this play, Walls was called for defensive pass interference against Alshon Jeffery. If you watch carefully, you'll see Walls' torso twisted to his right. The reason for this is because Jeffery had a firm grasp on his arm and was pulling him back. While Walls made a play on the ball, he was held, and that's why this flag shouldn't have been thrown, or if it had to be, on Jeffery.

In this play, Harris sacked Cutler and forced a fumble, which Demario Davis recovered. Davis ran to the end zone for a touchdown, but it was called back because the referee blew his whistle. This goes against league protocol, which is for the referees to let it play out. Why? Because they can call a touchdown back whenever, but once the whistle is blown, Davis can't advance the ball. It should have been six points the other way.

It's essentially the last play of the game, and the Jets can tie it up with a score and a two-point conversion. As Jeremy Kerley goes up for the ball, I want you to look at Vereen's positioning. He isn't facing the ball, he is purely focused on the receiver. This is textbook defensive pass interference. Apparently, it wasn't called because the ball was not catchable. First, Kerley did in fact catch the ball. Second, he caught the ball as he was over the line to go out of bounds. If he wasn't interfered with, it isn't unreasonable to think he could have come down in bounds with it. It certainly wasn't uncatchable. 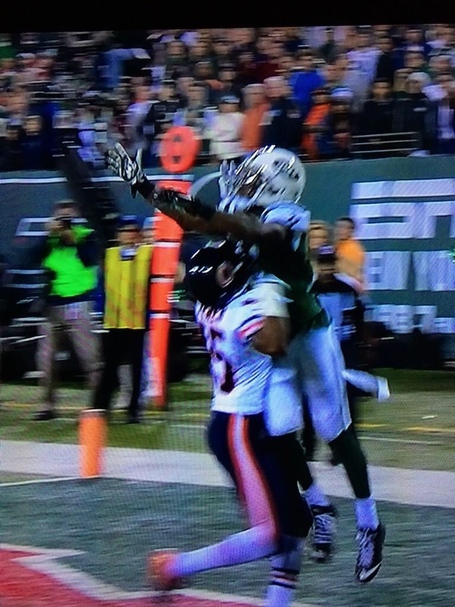 Bad calls are ultimately going to happen. There's nothing you can do about it. Make no mistake, the Jets shot themselves in the foot more than enough to lose this game. However, the officiating shouldn't be so blatantly awful as to have a significantly measurable effect on the game. In this matchup, they did, and that's Jerome Boger's fault.