GGN Chalkboard: The Highlights from the 1st Quarter of the Packers Game

As bad as the second half was for the Jets, the first quarter was a thing of beauty. Let's check out the highlights:

Share All sharing options for: GGN Chalkboard: The Highlights from the 1st Quarter of the Packers Game

Almighty folks, the Jets played the Packers and lost last Sunday; we all know that. Forgetting about the timeout, the second half collapse and the Winters non-block for a few minutes, the first quarter was pretty awesome. Let's try to relive the good of the first half and look at the two touchdowns.

The Jets defense had struck early on a fumble on a botched snap and Geno and the offense were in the red zone ready to strike. The play was to be a play action waggle pass, but Geno nearly tripped over his own two feet backing up. Both Sheldon Richardson (of fat man touchdown fame) and Chris Ivory fake a power iso to the left side. Both Amaro and Cumberland execute drag routes across the end zone as shown below. Geno is rolling to the right (bottom of the screen) 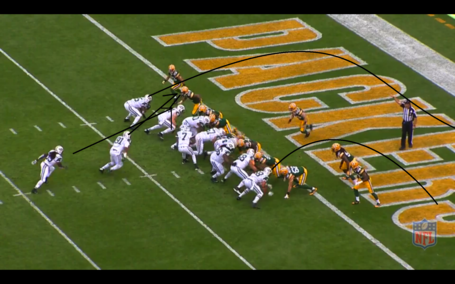 One thing I'd like to point out is that despite the near stumble and no WR getting open, Geno had a ton of space for being that far in the red zone. Some was play design (Richardson being a decoy) but there really great blocking. The entire right side of the line caused a big pile up which is just forming below in one of the black circles. The other circle is slightly more amusing: Sheldon Richardson with a head of steam blocking two guys who take themselves out of the play to avoid getting run over. 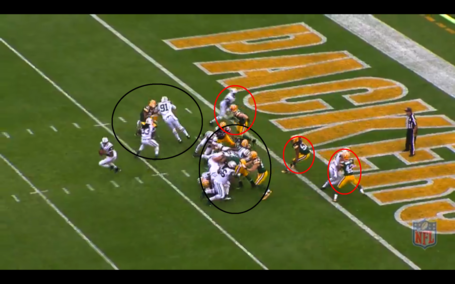 The three red circles are the defensive backs who are more than likely in zone coverage. You can see both the TE's are going have issues getting open as they go across the field.

One thing I'd like to point out is that it seems like one man could make a play on Geno. He's highlighted in red below. However, that man decides to turn and cover Cumberland over the middle of the field. That's what allows Geno to be able to run it in.  Geno is on the 11 yard line and has no one in front of him due to the blocking and one guy who had an angle turning his back to cover Cumberland over the middle. 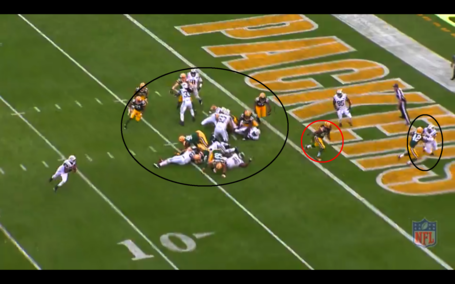 Less than a second later, Geno eyes the corner and goes for it. You can see both TE's are completely covered as the linebackers and DB's play pass first. Because of that, Geno has a lane to the pylon, and it's a footrace to the corner with Geno having the head start. Geno wins the race for the TD. 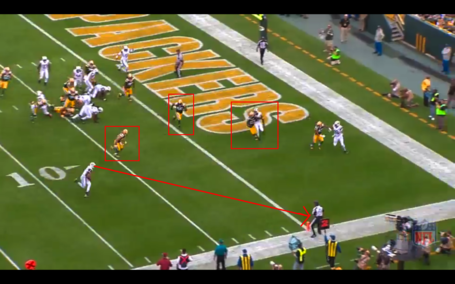 On this play I'd like to point out a few things that worked in the Jets favor:

1) Sheldon Richardson was a great decoy and made sure no one could get Geno by taking the long way.  He gets credit for taking out the backside support.

2) The TE's were completely covered the entire time, partially due to scheme. If Geno didn't have a lane, this is either a throwaway or potential INT.

3) The entire right side of the line fell down and caused a lot of defenders to get caught in the pileup. That allowed Geno the time to scramble.

4) Geno Smith made a great read, and had the foot speed to get to the corner.

Let's talk about the next TD: a perfect pass to Decker.

The Jets come out with a 3 WR set, with Decker at the top of the screen to the left of the formation, and Nelson and Kerley on the other side. Kerley is in the slot, with Nelson manning the outside right receiver at the bottom of the picture below. Instead of showing the routes here, I think it's more important to show that Geno read this defense perfectly and what they were playing

The Packers are in cover one as pictured below. 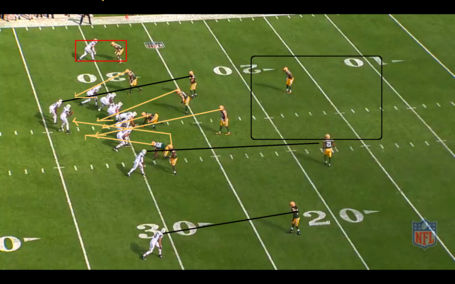 The Packers rush six, and the Jets have six blocking including Cumberland and Powell.  Powell block comes with an asterisk as he assignment is chip blocking on the play and providing help in the middle if needed but ultimately getting out for a route.

It's straight man to man on across the board with one safety going to be lurking in the middle of the field. This is a true setup of cover one with the safety "over the top." He's technically got deep responsibility, but because of the offensive set, he's going to favor the middle of the field rather than the sidelines. That will cost them as we set the play in motion. 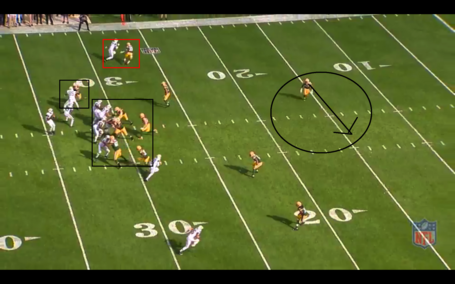 The Jets offensive line and whoever designed or audibled to the blocking scheme deserves every ounce of credit for this one. Check out the blitz. Only one man rushes to the side Geno is throwing to, but perhaps more importantly, his blind side is completely protected even though more defenders than blockers are on that side. That's some kind of effort by the O line to decide who gets whom.

Decker runs a double move. It's a fake 5 yard in or slant route, that  completely turns the defender inside out. (This is as he makes his inside move.) It's he and the corner one on one, and Decker completely fools him. The safety moves too far to the inside and gets caught there, leaving the corner on the island.

One thing I wondered and I couldn't tell on video alone is how well Geno sold the safety on the middle of the field route run by Kerley. I assume on this play, Geno did not give away the fact he was going to Decker. But knowing Geno's tendencies I'm also inclined to believe it was a well designed play, and the safety was caught with three guys going deep. The case remains unsolved. 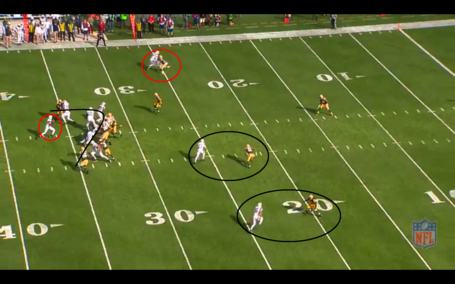 Contiuning a second later, the CB who is covering Decker is in no man's land and completely bought Decker's fake. The deep safety is looking at Kerley coming across the middle of the field and on the bottom Nelson gains zero separation and is out of the play completely. Geno eyes Decker and begins to step up to launch the pass, with a lane to throw in.

At this point, it's important to look at the blockers and what's going on. Not one Jet has failed at his block. A ton of credit goes to D'Brickashaw Ferguson who swings his man without any help to the outside. As for the blitz, it's picked up enough that Geno has time to survey his lone open option.  One man, running the delayed blitz has no one blocking him and a free shot at Geno, but still there's plenty of time for Geno to throw it. It comes down to Geno and Decker at this point: 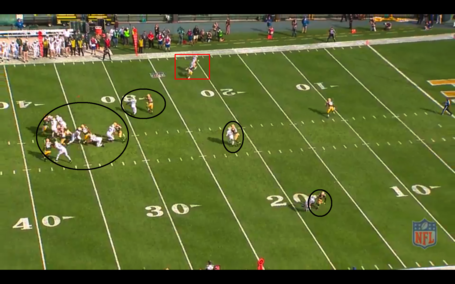 The ball is out of Geno's hands.  The safety has started to move over to Decker but it's far too late, as the corner is hopelessly behind Decker and would need an under thrown ball to save himself and the TD. The other WR's are completely blanketed. Geno has thrown the ball and taken the lick as the pass protection finally gives way.

While it's usually a failure when the QB gets hit, in this case the OL should be happy with the effort. The protection held up enough so Geno could make the read and allow the double move to have the desired effect. I think it's also important on this play in particular  to note the lack of any sort of separation the other WR's have gotten from the defenders. Covered is an understatement, they are totally shut down. The Jets cannot soley rely on Decker when the defense goes man and blitzes. Perhaps that's one facet the Jets need to work on heading into next week.

As for the play itself, it lead to seven on a perfect pass. Good stuff, Geno. We need to see more of this from the offense.