Is Calvin Pryor Being Exposed In Centre Field?

Pryor won't want to watch the Packers game too often, as we point out just a couple of plays where the safety is exposed.

Share All sharing options for: Is Calvin Pryor Being Exposed In Centre Field?

There is one thing that bugs me, if you watch Pryor at Louisville, he does the majority of his damage as a box safety. A player coming downhill to plug the run and deliver the hit, however I've seen him mostly in a deep cover role for the Jets, which doesn't really play to his strengths. Pryor to me seems more suited to the SS role than the FS role that we have him playing and on a few occasions against Green Bay he was exposed.

You'll have to forgive the angles, my coaches film doesn't seem to be working, so using the condensed play by play. Just before half time the Packers were driving and with around 20 seconds left on the clock we see a completion to Adams. 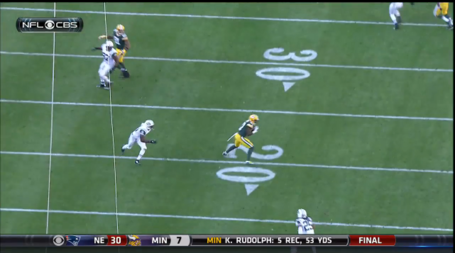 Immediately off the snap, Antonio Allen shows Adams inside, with Allen running an inside route, he is able to get 2-3 years of separation immediately. Pryor who is at the bottom of the screen starts to move to his left rather than moving forward. To me it looks very obvious that Allen was supposed to get inside help from Pryor on this play and Pryor is just late to the ball. 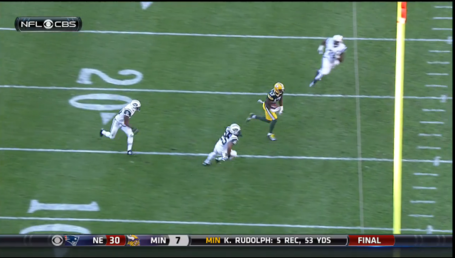 Pryor has taken several false steps to his left and as a result he is having to change direction, lose momentum, giving Adams a clear lane into the middle of the field. Notice that Adams catches the ball on the 20 yard line and had Pryor reacted quicker, the yards after the catch would be minimal. Instead, because of the poor angle taken by Pryor, Adams is not brought down until the 8 yard line, meaning he had 12 yards after the catch. A massive amount in football, but especially when you only have 15 seconds left on the clock.

Fast forward to the Nelson 80 yard TD catch and we have Pryor again playing the deep safety role in a cover 1. His job here is to read the play, react to the situation and prevent any big plays. 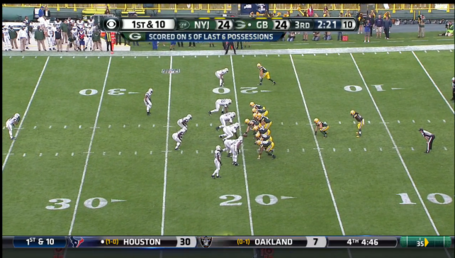 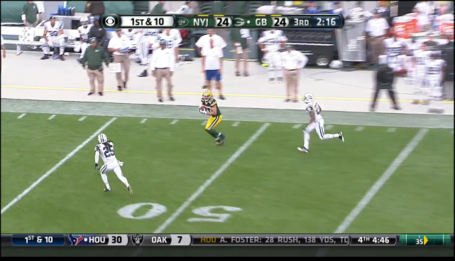 Now I paused it here because you can clearly see that Nelson is coming inside and the safety in this situation needs to be patient and composed and not dive into a tackle. If he can slow Nelson off his pace even slightly, it gives the trailing defender (Milliner) a chance to catch up with the play and make the tackle from behind. Already you can see the angle Pryor is taking after he was late to the play and it's no surprise what happens. 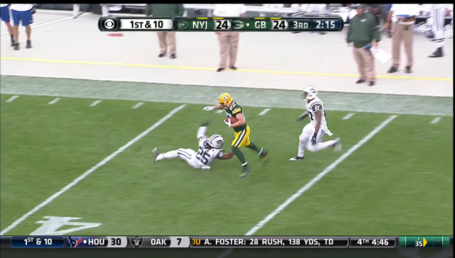 Nelson makes the easy cut inside, Pryor dives in after over-running the play and fails to get any meaningful contact on Nelson who sets off to the end-zone.

Now I'm not putting it all on Pryor, he's a rookie, he'll learn and he will get better. However a lot of rookies take bad angles to the football. A lot of box safeties, struggle playing that centre field role and a lot of aggressive players by nature struggle to contain their 100% full speed ahead attitude.

It's worrying to see us struggle so much, but if we do continue to play Pryor as a lone deep safety, we're asking for trouble. I just highlighted two plays, but I'm sure there were plenty more.