John has a nice piece on Stephen Hill - Not a Victim of Expectation and this is just a companion post. In the thread conversation the topic arose on just how bad Hill had been, finishing at the bottom of all kinds of measures (even run blocking grades?! - shocking!). I thought I'd put together a distribution graph so one could see where he placed in the league. Because I wanted to measure "impact" I put QB rating on the y-axis which is a production metric, and Yards Per Route Run, which is more of an "impact on the offense" metric. As it turns out there was only one player in the NFL (using PFF25) who had a lower impact on his offense, Greg Little of Cleavland. 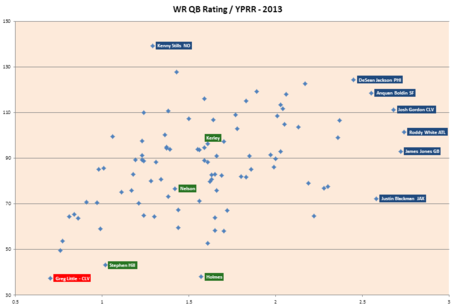 click on the image for a larger clearer graphic

One can see that Holmes is down there in QB rating, largely due to the interceptions Geno threw in his direction, and his many drops, but I think it safe to say that with Holmes' potency in the deep game he was (significantly) more impactful on the offense.

One good thing about distribution graphs is that it is easier to get a sense of how far of an outlier a performance is. Yes, Geno was bad, but somehow all the other WRs had more impact on the Offense than did Hill.