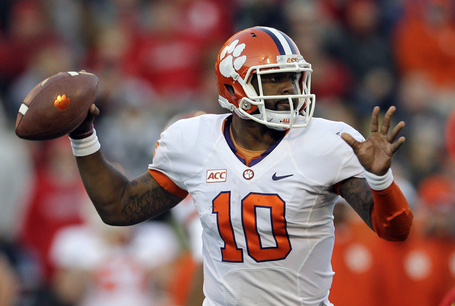 0:39- Throws behind checkdown receiver on third down- does a good job not throwing it to his first read (#86), but #13 was wide open down in the middle of the field.

1:31- Keeps two hands on the ball, but Joyner tomahawks him and forces the fumble anyway.

3:32- Throws behind Watkins, gets touchdown anyway.

8:52- Every receiver blanketed, had no choice but to put it in the air on 4th down.

10:35- Great mobility, accuracy on the run. Puts the ball in the perfect spot on 4th down.

0:24- Poetry. Shows agility to squeeze through the hole, then accelerates faster than it would seem possible for a man his size.

1:21- Great footwork, steps into throw despite charging defender. Drops a perfect spiral into a bucket from 40 yds out.

1:30- Intentional Grounding and a Safety, but incredible arm strength to get the ball out under that kind of pressure.

2:54- Horrible decision, cost his team points in the redzone.

3:44- This is is a positive play for the Tigers strictly because of the Tajh Boyd's awareness and athleticism. The play was a called screen, but it wasn't there so he tucked it and showed off toughness and agility to slip tackles and pick up 15 yds.

4:40- Throws to a blanketed receiver, but this is pure arm talent. Tight spiral that travels 50 yds in the air and is almost perfectly placed. An NFL throw.

Was rarely asked to make reads, pre-snap or otherwise, in Clemson's spread offense. Large majority of throws behind or within 7 yds of line of scrimmage. Lots of screens, halfback flares. When he was throwing downfield, it was largely catch-and-shoot. Because of this, Boyd threw lots of passes directly into coverage. Occasionally, he was asked to make simple reads and he did a generally good job of this. Average pocket awareness. Did a serviceable job feeling pressure and deciding whether to tuck and run.

90%+ of snaps from shotgun. Mostly short three-step drops. Spotty footwork. Is as likely to throw from his back foot as he is to step into the throw and deliver. Average release speed. Throws mostly over the top, but will occasionally revert to sidearm if pressured. Release point is low, especially for his size. He releases the ball about helmet-high, which will be a problem for a 6'1" QB in the NFL. Keeps two hands on ball until release.

Big, NFL arm. Can throw the ball 60-70 yds on a rope. Tight, impressive spirals. Good velocity on all throws. Accuracy increases with range. Will drop it in a bucket from 50 yds out, then underthrow a HB 5 yds in front of him. Great deep accuracy. Average mid-range accuracy. Mediocre short yardage accuracy.

Intimidating runner. Turns into a fullback as soon as the ball is tucked. Imposes his will at the end of every run, inviting contact. Gets 2-3 extra yards after contact every time. Great acceleration. Surprising agility. Has vision to slip through a crowded pocket and dance into the open field. Decent top-end speed. Tucks ball well.

The Clemson offense belonged to Sammy Watkins, everyone else just lived in it. Boyd has some gaudy passing numbers, but he was surrounded by an embarrassment of riches at the receiver position throughout his career at Clemson. Although he has a big arm and some serious running skills, Boyd's accuracy and mechanics leave a lot to be desired, and he doesn't have ideal size for an NFL QB. He will have to start from scratch to learn an NFL offense.

Despite intriguing physical tools, incredible leadership skills and superb intangibles, Boyd's ceiling is that of a backup who could possibly see the field in a short yardage sub-package.

What do you think? Was Boyd worth a 6th round pick?

Feel free to comment on the format or approach of these articles. I intend to do this for every one of the Jets draft picks and I want the articles to be as reader-friendly as possible.