Daily links connecting you to articles about the NFL's New York Jets.

Kimberley A. Martin: DC Dennis Thurman has been accused of slapping a woman.

Rich Cimini: Thurman was not charged in the bar incident.

Kimberley A. Martin: Rex says that we will see if QB Tajh Boyd will only play quarterback.

nick.ludovico: Pryor fits exactly what the Jets look for in a player.

Kristian Dyer: Amaro is learning to play tight end all over again.

Seth Walder: The Jets are hoping that Amaro can be a weapon in the passing game.

Bart Hubbuch: Amaro's goal is to be the rookie of the year.

Brian Costello: OLB Trevor Reilly is relishing his one chance.

Kristian Dyer: Reilly substitutes a tattoo for lost wedding rings.  It was not a tattoo of QB Mark Sanchez.

Jane McManus: Reilly's draft dream comes true with the Jets.  Spoiler alert: he was drafted by the Jets.

Jets Insider: The rookies have started their first day of work.

The Jets Setter: Competition will fuel the Jets.

Here are yesterday's links, in case you missed them.

Here is the thread about nothing.

I'm not good at talking about this stuff, but I would like to say RIP to a great Jets fan, Robert Wasilewski, who passed away recently.  Some of you may know him.  Some of you may have seen him driving around in this truck: 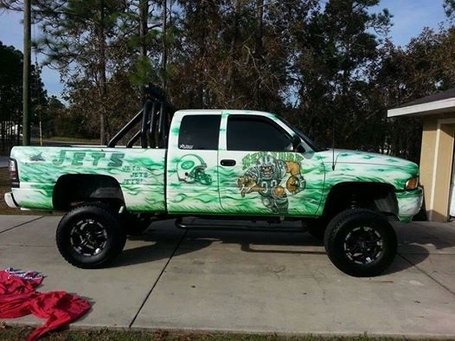 Once again, a big thank you for all those who have been voting for Beloved Community school.  This contest is running until next month so I'm hoping if we all pitch in and vote, we can help this Jersey City school win a recycled playground.  They are also taking oral care products for recycling.  Thanks again, and please continue voting!

Sorry this post is kinda up late today.  I was busy working on my screenplay about gangster monsters.  It's called "Goodzillas".

Now here is Rage Against the Machine with "No Shelter":

Have a great weekend, everyone!