The Futility of Strength of Schedule as a Statistic

Share All sharing options for: The Futility of Strength of Schedule as a Statistic

As we’ve said, nobody can really predict how difficult the New York Jets schedule will be. This is especially true using the Strength of Schedule (SoS) statistic. SoS is based on a team's future opponent’s records the previous year. It doesn’t try to project how the teams have changed in the offseason through cuts, signings, trades, the draft, injuries, player development, etc. Rather, it relies on teams staying exactly the same, which, as we know, simply doesn’t happen.

So I wanted to take a look at exactly how unreliable SoS is by looking at the past several years of projected SoS and comparing it to a team’s final regular season record (listed as A/R, for actual record). As there are so many numbers and they themselves aren’t particularly relevant without context, I colorized the table to make it easier for you to look at. The closer to .500, the more yellow the number will be. As the numbers stray from the mean, they get progressively green (indicating a better record) or red (indicating a worse record). 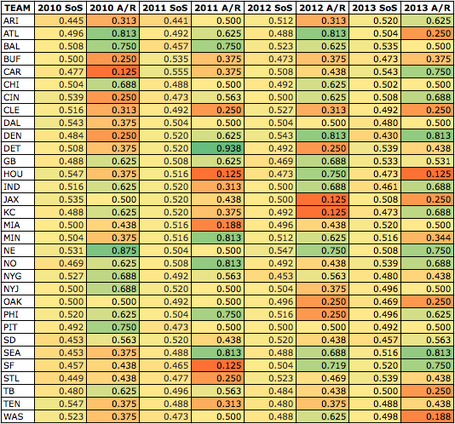 As you can see, the SoS tends to hover around .500, no matter the team. There’s slight variation, but not nearly as much as the team’s actual records. On average, there are only about six or so teams per year that end up with a record similar to their projected SoS, out of thirty-two, and that may be generous. Furthermore, there doesn’t appear to be any connection between a positive or negative SoS and the actual record. Many teams with "easier" schedules end up with awful records, and many teams with "hard" schedules end up with good records.

It’s my opinion that SoS is a meaningless standard and absolutely no credence should be given to it. Maybe there is a way of creating an advanced statistic hat gives a more meaningful response, but for now, the future remains hard to predict.