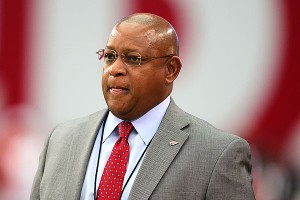 I don't see this talked about much while everyone tries to read the Man Without Qualities John Idzik. As Idzik turns his nose at high-flying free agents, hoards his cap space, signs bargain basement gems to be polished, condemning the Jets to another rebuilding year, and Idzik supporters urge patience to a long term "build through the draft" process, it seems that few have talked about the man that Idzik hired last year . Is it possible that the formative and guiding influence behind much of what Idzik is doing isn't really Seattle as much as we think, but rather his former boss and long time Cardinal architect Rod Graves? Is Graves the one who has Idzik's ear time and again and the one who created the Idzik blueprint? At the very least we have to admit that Idzik is still inexperienced at the job of GM and personnel management, and Graves is quite experienced and was hired for that experience. At the very least, if Idzik isn't actively following his philosophy, he is a strong, highly respected personnel voice in the room.

Initially we have this description from the Arizona Cardinals website, classic "build through the draft" stuff, talking about Graves who had lead the personnel department since 2003:

As Cardinals G.M., Rod has been particularly successful building the team through the NFL Draft and free agency. The Cardinals have been commended for their successful draft classes, especially in recent years. Current Cardinals Patrick Peterson, Larry Fitzgerald, Darnell Dockett, and Adrian Wilson are Pro Bowl players who were acquired through the draft. Of the 22 Cardinals starters at the end of the 2011 season, 11 were draft choices of the team during Graves’ tenure while one other starter joined the team as an undrafted rookie free agent. Of the 35 players drafted since 2007, 22 remain with the team and 18 of those players have started least one game with the Cardinals.

Sound familiar? Graves was Idzik's boss from 2004-2007, and was hired by Idzik on June 10th of last year to the position of Senior Director of Football Administration. Not quite sure what that job position calls for, perhaps it is merely Head Adviser to the GM.

A little more evidence than simply building through the draft? There is this bit of parallel in personnel moves. Graves, as Vice President of Football Operations ("leading the personnel department") presided over the 2005 Arizona reclamation of former 4-time pro bowler Kurt Warner at the age 34. The Jets just signed 4-time pro bowler Michael Vick, again at age 34 (in June). Coincidence? Perhaps...But I see some continuity there.

For those looking for more Warner/Vick parallels, Warner started the first 3 games for the Cardinals in 2005, replacing McCown who started 13 games the year before, but then fell to a groin injury. McCown played the next 5, was then replaced by Warner who played the next 7, again replaced by McCown to end the year. Warner started the 2005 year 0-5 as a starter. Warner would go onto start 5, 11, 15 and 16 games for the Cardinals the next 4 years.

More on how Graves handled the QB position with the Cardinals further down.

In any case, for those who have been straining towards the Seattle example, looking for bread crumbs and tea leaves to figure out just what John Idzik will do - because of Seattle's recent success, and because Idzik's role there seems to be somewhat inflated in fan minds - perhaps the real place to be looking is into Arizona Cardinal history, from 2003-2012. While Seattle may have helped shape Idzik, Rod Graves is actually here, in the same room with him.

Below is the Cardinal draft history. I don't have the time to exhaustively look into this - there is a interesting Cardinal fans article linked at bottom. Off hand I do see that the Cardinals in Rod Graves' tenure drafted a DB in the first round 3 times, Antrel Rolle (8th), Rodgers Cromartie (16) and Patrick Patterson (5). The draft of DRC and the presence of Graves with the Jets also sheds light on this year's Free Agency period. Was it Graves - our covert GM?! - who made the call that DRC was not worth throwing a significant contract to? -- okay, I digress. It would seem that Graves was supportive of the idea that if you see a big DB talent in the 1st round you go get him. And look what we did in 2013, we draft Milliner 9th overall. Graves was not yet hired (perhaps Idzik for political reasons had to keep the scout team in tact), but can we doubt that Idzik at least thinking about Graves's example, if not consulting him? Graves was fired January 8th, Idzik hired January 19th. And would this possible love for DBs show itself again in the first round or later this year, given the hole we have created for ourselves there? The Graves Cardinals had no problem drafting a DB in both rounds 3 and 4 in 2009 after drafting DRC in the first of 2008.

Or, for those that are thirsting after a WR, we could note that in those 10 years 3 times a WR was drafted in the first round: Bryant Johnson (17), Larry Fitzgerald (3), Micheal Floyd (13). In fact 60% of the the drafts went to DB or WR in the 1st. Hmmm. Those are two perceived Jet weaknesses, is this a Graves blueprint at work? Further down there is the linked article that goes into Graves's draft philosophy in more depth, it gives these position numbers for the top 3 rounds of the 10 drafts he led:

As far as the draft goes, there are two dimension of this question of Rod's influence. There is his judgement of talent, the actual assessment of players (he's been a professional football scout since 1982), but also there is his philosophy of team building, which in many ways Idzik seems to reflect at least at this early stage. We, as fans, have not paid enough attention to the fact that Idzik has hired a mentor, and that he seems to be following a similar approach. The question is, to what degree? And if Idzik is walking in Graves's footsteps is this a good thing?

Of course Cardinals fans might have something insightful to say about Graves who was running the team for a long time. This article attempts to point out just what was wrong with the way that Graves approached the draft, starting with the critical position that there are three fundamental elements to a football team, and that Graves failed to substantively address them in the draft fundamentally undermining the long term success of the team:

It appears that Rod Graves just did not know what it took to build a quality football team. He ignored many of the most important areas of an NFL team (QB, OL, pass rusher) and stocked up on some of the most reliant positions in the NFL (WR/RB). In the 2003/2004 drafts, Arizona drafted three wide receivers in the first two rounds (Johnson/Boldin/Fitzgerald) while still ignoring the fact that they had nobody competent to throw those guys the football. Despite the obvious talent of Larry Fitzgerald, was it really a smart move to pass on a quarterback (Philip Rivers or Ben Roethlisberger) to add another first round WR to the first round WR you drafted the year previous and the 2nd round guy who had just gone over 100 catches and 1000 yards for you as a rookie?

For Jet fans the list of weaknesses that Graves failed to address through the draft is perhaps a little alarming because after only 1 year behind Idzik's leadership some of these are already areas of concern.

The biggest one is the pass rush, the lack of an edge rusher. Rex Ryan has produced some of the least distinguished pass rushes in the NFL during his tenure, despite a reputation to the contrary, and a big part of this has been the Jets ignoring the importance of an edge rusher in the 3-4. Last year many fans hoped that an edge rusher would be had in the draft, it was not to be so. It would seem that instead of counter balancing this bias that the Jets have had in the Rex Ryan era, Graves actually may reinforce it. A Ryan-Graves agreement might make a formidable force in the draft room. Under this line of reasoning edge rusher will not be a point of strategic focus in future Jet drafts. We instead are seeing the use of serviceable veterans (Pace - Graves drafted Pace) and an out of place Coples, and the Idzik bargain specialist Barnes, thus far. Our 3-4 may continue suffer with a beefed up DL but nobody to go and get the quarterback. As a sidenote, if we do select a mid-round middle linebacker in this draft - something Graves is said to cherish - to replace Davis who has been given the Ray Lewis leadership position for life, then we know something is up in terms of his influence.

The second area of concern among some fans is the OL. 2013 saw disappointing performances from its two all pros, a hint that they are ready to start showing their age. Already in 2014 we have experienced the downgrade of Howard for Giacomini at right tackle, something that may hurt the production of either of our QBs. Worrisome in itself. It would appear that the line is heading in the wrong direction. If the Graves 10-year example does have influence then we could be heading for long term stagnation and even regression at OL, at least not expecting the draft to produce the answers there. We did draft OL last year, including what appear late round whiffs. If we significantly draft it again this may suggest Idzik is more independent from Graves's history than this line of reasoning would predict.

The last area of concern is at QB. Yes Geno was selected (Graves did help select Leinart 10th overall in 2006), but again, in this foreshadowing of possible philosophy it could be that if Geno does not work out there will be no focused draft strategy to answer the question at QB. Instead, perhaps, we may be looking at veteran solutions to any Geno failing or mediocrity, at least in terms of theme. We won't be doing it the Green Bay Packers way, if this thesis is correct.

There have been some fans clamoring for skill position emphasis in Jet drafts, and for them Graves's history could signal a reprieve. The criticism has been from Arizona fans that he over-drafted skill position players. Music to some people's ears? For me, a passer's league like the one we have I tend to agree with the article's author. QB, OL and pass rush are vital long term elements to a successful football team, not places to skimp. Rex Ryan's approach to pass defense is possibly highly flawed, and if QB and OL are going to be addressed in a piecemeal way there are reasons for lasting concern.

"Building Through the Draft" is a phrase we hear over and over again. But what are we building?

It would perhaps be even more instructive to look at how Rod Graves handled Free Agency, how he dealt with productive team veterans who came up on contract negotiations. Maybe this is something someone has better perspective on than I. In any case I'm just opening up a line of questioning, and hoping others have interesting observations to make.