The Fearsome Foursome. The Purple People Eaters. The Sack Pack. These are all defensive lines in the National Football League that have entered league lore for their domination, brutality, and sheer effectiveness. They say football games are won and lost in the trenches, and a legendary defensive front makes winning a heck of a lot easier.

Enter the New York Sack Exchange. The Sack Exchange was a creation of the New York Jets from 1979 until 1983. It was composed of defensive ends Mark Gastineau and Joe Klecko, along with defensive tackles Marty Lyons and Abdul Salaam. Together, they formed the most daunting front in team history. 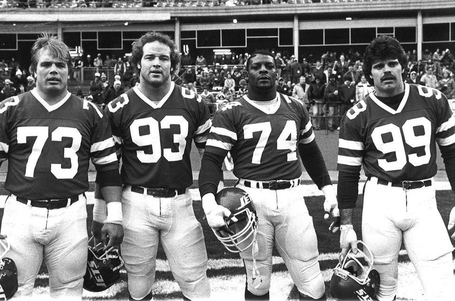 The name apparently comes from a 1981 pre-season contest held by The Jet Report, a magazine, which asked for names for the team. Dan O'Connor, a police officer from Brooklyn, won by calling them The New York Sack Exchange. A fan at Shea Stadium wrote the name on a bed sheet, and Public Relations Director Frank Ramos used the name in a press release, after which the name became widely adopted.

"It wasn't a question of whether we'd get to the quarterback, it was how many times." -Marty Lyons

According to Klecko, the 4-3 defense the Jets ran was very simple; in a word, vanilla. Yet, the Sack Exchange could do it all. Gastineau and Klecko could rush the passer better than nearly anyone else in the league, and Lyons and Salaam were formidable run stuffers. In 1981, the team collected 66 sacks, a team record. Klecko had 20.5, Gastineau had 20, Salaam had 7, and Lyons had 6. For comparison, the team has averaged 36.8 sacks per season in the Rex Ryan Era. That year, the Jets would go 10-5-1 and lose 31-27 to the Buffalo Bills in the AFC Wild Card. Despite the loss, simply put, there was no stopping the Sack Exchange. 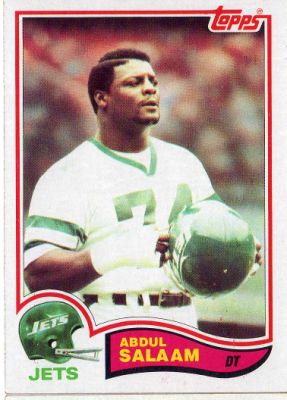 Salaam is the forgotten man in the Sack Exchange, mostly because he faded into the background with high profile guys such as Gastineau by his side. Salaam was born Larry Faulk, and changed his name in 1977 to Abdul Salaam, which means, "servant of peace" in Arabic. He was a seventh round pick in 1976 out of Kent State University, and was 6'3", 262lbs. Per TheJetsBlog:

Salaam did not make many headlines during his career, but had perhaps his most important moment in a game against the Miami Dolphins at Shea Stadium in November of 1981, on a day when the Jets could move into a first-placed tie with a win.

Having lost RB Mike Augustyniak to a severe chest injury two weeks prior, the Jets had to endure further injury issues as Donald Dykes hurt his arm and Marty Lyons pulled a hamstring. Even worse than that, Richard Todd was laboring through a cracked rib as the Jets trailed 12-6 at the half.

The Jets were still down by three with Miami about to punch in a last-minute, game-clinching touchdown, when Salaam, who had already recorded a first-half sack, plugged the hole and stuffed a third down run for no gain. Having settled for a field goal, the Dolphins then watched the injured Todd lead the Jets downfield and hit Jerome Barkum with the game-winning touchdown pass.

Naturally, it was Todd who got all the headlines and plaudits, with some people referring to this as the "Richard Todd Flak Jacket Game", but they couldn’t have done it without Abdul Salaam. Somehow, that was symptomatic of his whole career.

He would play with the Jets until the end of the 1983 season, which he missed almost entirely with a torn rotator cuff, when he was traded to the San Diego Chargers.

Klecko was selected in the sixth round by the Jets in 1977. He was a graduate of Temple University, alma mater of Muhammad Wilkerson, where he boxed and won the NCAA club boxing title twice in the heavyweight division. Klecko is a fascinating individual, partially because he secretly played semi-pro football for the Aston Knights under the name Jim Jones to keep his college eligibility.

According to Hall of Famer Anthony Munoz, "In my thirteen seasons, Joe is right there at the top of the defensive ends I had to block, up there with Fred Dean, Lee Roy Selmon, and Bruce Smith. Joe was the strongest guy I ever faced. He had perfect technique - hands in tight, great leverage." Klecko made the Pro Bowl in 1981, 1983, 1984, and 1985, and was an All-Pro in 1981 and 1985. He is the only player in NFL history to be selected to the Pro Bowl at three different positions, defensive end, defensive tackle, and nose tackle.

As Hall of Famer Joe DeLamielleure noted, "I had to block Joe Greene and Merlin Olsen when I was playing and, believe me, Joe Klecko was equal to those two guys. If Joe Klecko had played one position for 10 years, he’d have been considered one of the top two or three players at that position, whichever one it was." After a fantastic career, Klecko was eventually released by the Jets after the 1987 season.

In 1979, Lyons was the Jets first round pick, and the main focus of their draft. He was selected fourteenth overall, and was 6’5", 250lbs. He All-American at the University of Alabama, where he helped them win the National Championship in 1978. Lyons was incredibly consistent when he was on the field, but suffered from numerous Injury problems. In 1981 and 1982, it was his hamstring, and he had eight operations during his playing career. 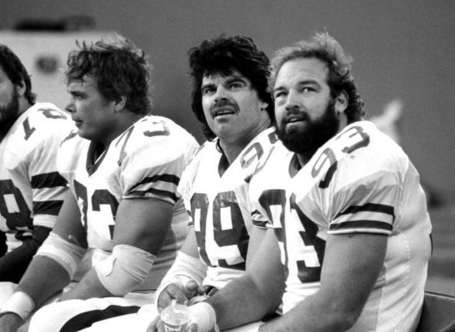 In three playoff games in 1982, against the Cincinnati Bengals, Oakland Raiders, and Miami Dolphins, Lyons had a sack in each game. In the AFC Championship, known as the Mud Bowl, Lyons led the team in tackles, as a defensive tackle, with twelve. Lyons would go on to lead the team in sacks in 1988 with 7.5, and would play until 1991, longer than any other member of the Sack Exchange.

Gastineau, the most vocal of the group, was the second round pick in 1979, following the selection of Lyons. He was found by Connie Carberg, the first female scout in NFL history, who worked for the Jets and who said:

A replacement [defensive lineman] was needed and my boss, Mike Hickey, who was on the road scouting, called me and asked me to look at films, read the reports, make calls and decide and call him back. I spent time doing that and only one out of the 6 stood out on film and yet he was thought to be a 6th round pick from a small school. The phone call with his enthusiasm of readiness and attitude clinched it for me. The name: MARK GASTINEAU.

Gastineau was 6’5" and 266 pounds and was a Junior College All-American at Eastern Arizona Junior College before transferring to Arizona State, where he dropped out. Gastineau ended up at East Central University in Oklahoma, where he reportedly ran a 4.8 40 yard dash (compared to Wilkerson's 4.96). He reportedly got that time up to a 4.56 40 while on the Jets, which would make him one of the fastest timed defensive ends in league history.

Gastineau was a pure pass rushing monster that was the best pass rusher to ever wear the green and white. He had 11.5 sacks in 1980, his second season, and 20 in 1981. Gastineau then led the league in sacks in 1983 with 19, and in 1984, he set the record for most sacks in a season with 22, a record that would stand until 2002 when Michael Strahan "broke" the record with 22.5. That same year, Gastineau won UPI's AFC Defensive Player of the Year. He was later ranked the eigth greatest pass rusher in NFL history on NFL Network's NFL Top 10 Pass Rushers. 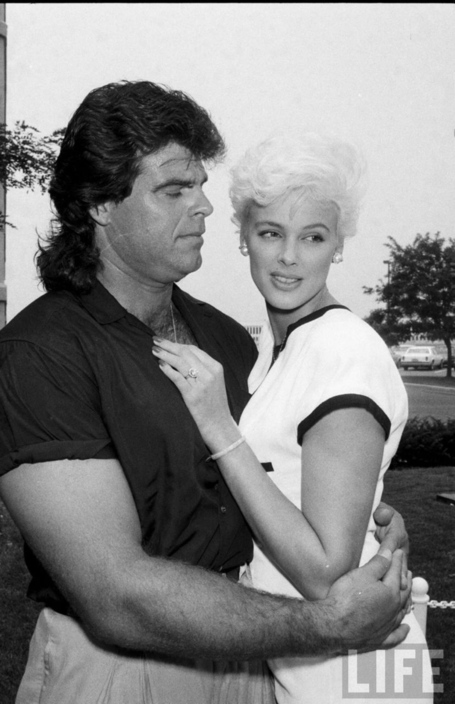 After he would sack the quarterback, Gastineau would engage in what could loosely be defined as dancing; in reality, it was more like a seizure. His dance infuriated everyone, including his own teammates, despite him never doing it near the quarterback he sacked or the offensive lineman he embarrassed. In 1983, Jackie Slater of the Los Angelos Rams was furious after Gastineau sacked quarterback Vince Ferragamo during a 27-24 overtime win and shoved Gastineau. Lyons and Kenny Neil jumped Slater, and a huge fight between the two teams resulted in thirty-seven players getting fined a total of $15,750 (approximately $36,000 today, accounting for inflation). Gastineau had the largest fine of all, $1,000. After the fight, Slater reported that offensive linemen across the league called to congratulate him for putting Gastineau in his place. Knowing that everyone hated it, Gastineau purposefully chose to keep dancing.

That is, until March 1984, when the NFL banned the dancing by outlawing "premeditated expressions of exuberance" with a five-yard unsportsmanlike conduct penalty. The rule, known as the Gastineau Rule, was partially directed to the Washington Redskins’ Fun Bunch, and partially to Gastineau.

Gastineau later began dating Brigitte Nielson, an actress most famous for playing Ivan Drago's wife in Rocky IV. When Nielson began experiencing health problems in 1988, Gastineau retired from the Jets to be with her.

While 1981 resulted in the most sacks in team history with 66, 1982 was the pinnacle of the Sack Exchange's time with the team. That season was shortened by a players' strike, which lasted for fifty-seven days. Despite that, the team went 6-3 under head coach Walt Michaels. The offense was led by Todd, Wesley Walker, and Freeman McNeil. The defense, a 4-3 front, was led by the Sack Exchange and linebacker Lance Mehl. Interestingly, thirty-six members of that team were drafted by the Jets. By comparison, of the final 2013 roster, only nineteen players were originally drafted by the team.

That season, Klecko injured his right patella tendon in the second game of the season, and returned for the first playoff game against the Bengals. In that game, the defense alternated between a 4-3 and a 3-4 to confuse quarterback Ken Anderson, and sacked him four times while picking him off three times. The Sack Exchange limited the Bengals to sixty-two rushing yards. Although the offense started off slow, the Jets quickly heated up and won 44-17.

Before the second playoff game against the Raiders, Lyons was giving a motivational speech to the team. He wanted to smash a movie projector to make a point and get the team riled up, but was told by the coaches that he would be fined if he threw the projector out the window. Instead, Lyons decided to punch a window, smashing it into a million pieces. The next day, a fourth quarter touchdown would give the Jets a 17-14 win, and let them advance to the AFC Championship Game against the Dolphins.

That game later became known as the Mud Bowl. The Dolphins chose not to put tarp over field as it rained before the game, which slowed the Jets passing attack of Todd to Walker down. Todd would go 15-37 for 103 yards and five interceptions, of which, linebacker A.J. Duhe had three. Although they won the Mud Bowl, the Dolphins went on to lose to the Redskins in SB XVII.

The Mud Bowl was effectively the end of the famous defensive group. Following the 1983 season, in which the Jets went 7-9, Salaam was traded to the Chargers, and the New York Sack Exchange was no more. 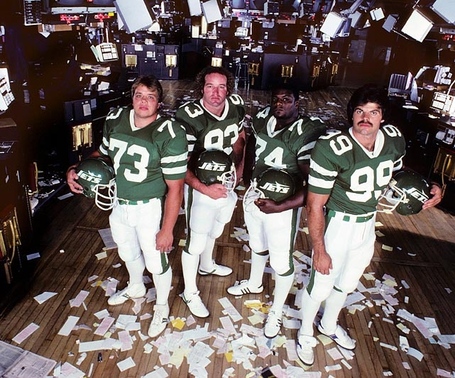