Crackback wrote a nice FanPost a couple days ago that really rung home for me titled "No, Not There!!" It made me chuckle because it was so true for me as I'm sure for many of us here. An excerpt from the post:

"You start by sifting through the mock drafts and the positional rankings; then you start honing in on guys that fit positional needs for your team; then you start filtering for scheme fits; and then... voila... you fall in love."

This is exactly what happened with me. Voila! Marion Grice, RB, Arizona State. 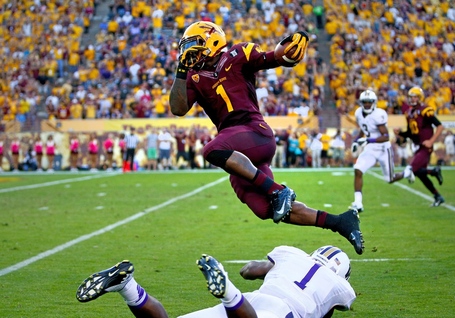 In case you are wondering, Marion Grice was a junior college transfer out of Blinn Community College. He was listed by Rivals.com as the No. 5 overall junior college prospect in the country and the nation's top junior college running back by SuperPrep. He was rated a four-star recruit by both Rivals.com and Scout.com, He came to ASU with three years to play two... totaled 2,221 rushing yards and 33 touchdowns over two junior college seasons at Blinn... was tabbed as a Second-Team NJCAA All-American as a sophomore in 2011 after carrying 174 times for 1,052 yards with 16 rushing touchdowns... was listed as the top running back in the Southwest Conference in the preseason by JCFootball.com... earned First-Team All-Southwest Junior College Conference honors as a freshman in 2010 after rushing for 1,169 yards and 17 touchdowns.

Why I Fell in Love

Before I start I know many of my fellow GGN peeps have De'Anthony Thomas, Carlos Hyde and even Dri Archer who I really like on there wish list but Marion Grice is my guy.

What is it about him? He never takes a direct hit. He is very elusive, just kind of slides and and glides. He is a red zone threat by either running or through the air. Marion Grice had a high 31 carries in the red zone this season, resulting in 11 rushing touchdowns to tie for the national lead. There is the same versatility in the passing game. Grice had four red-zone touchdown receptions. Typically, running backs leading the country in scoring are no-nonsense bulldozing touchdown-scoring vultures. Grice possesses a relatively long, lean frame for the running back position. His stature leads to a somewhat upright running style that, frankly, isn't conducive to what one might normally associate with a redzone scoring threat. While his natural leverage isn't ideal, Grice attacks holes when they are there, showing good downhill burst, the vision to set up blocks and the ability to spin off would-be tacklers to generate yardage (and scores) after contact.

His ability to catch the ball!! The Sun Devils used Grice in a variety of ways. Rather than just line him up in the traditional I-formation and pound away, Grice was often released on quick passes and even split out wide as a receiver. There, his soft hands and unique body control for the position is displayed. Grice is a natural receiver, showing the ability to quickly pluck the ball outside of his frame, corral it and make the first defender miss in one, fluid motion. Grice's ability on third down isn't limited to his ability to catch the football. Grice is an alert and active pass blocker, who locates would-be sack artists quickly and was willing to give himself up to help his quarterback find other options downfield.

Even though the running back position is being de-emphasized, Grice's consistent ability to punch the ball into the end zone could set him apart in what is setting up to be a weak crop of running backs in the 2014 NFL draft. I think this guy is a steal in the 3rd round and that's the beauty of it. Plus, to put it in baseball terminology, he is the closest to a '5 Tool Player' you can find. He can run, catch, score, block and return kickoffs . Needless to say, I am high on the guy and would love him to be a Jet. As Crackback said in his post, I will follow his career in the NFL either way.

Is Marion Grice worthy of one of our 3rd round picks?