The New York Jets have many holes to fill this year, some more glaring then others. Offensive weapons will most probably dominate the first few rounds in the draft so it leaves us looking to the later rounds for the rest of the positions of need to be filled. IMO, this is where the front office and scouting department earn there pay check. It is in the later rounds that you find that sleeper pick, that diamond in the rough, guys that solidify championship caliber teams.

At this time there is a lot of uncertainty at the CB position for the NY Jets, namely Antonio Cromartie. According to OverTheCap.com his cap number in 2014 is $14,980,000. There is no way he's here this year at that number. By cutting him it opens up a projected $9,500,000 in cap space with $5,480,000 projected dead money. In addition there are health issues. Will he fully recover from the nagging hip injury and return to his 2012 pro-bowl form? Who knows, that's a whole other post. With that said, lets take a look at this guy: 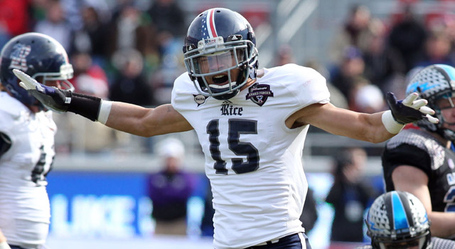 Who is Phillip Gaines?

Phillip Gaines is a 6'1 lockdown cornerback. Gaines is a press corner that can contest passes at the catch point. He plays the ball well in the air. He's among the leaders annually in pass breakups. He has good body position to knock down the ball. He has the size that NFL teams want outside to match-up with big receivers.

2012 was his breakout year, returning to his role as the Owls' leader in the defensive backfield after missing most of 2011 with an injury. He was second nationally with 18 pass breakups and a Consensus All-Conference USA selection. He led the conference and was tied for eighth nationally with 1.50 passes defended per game. He is the only junior to be selected a captain for the 2012 team and the preseason choice by conference coaches as the C-USA Defensive Player of the Year. On Watch Lists for both Jim Thorpe Award and Walter Camp All-America. In 2013 he earned first-team, All C-USA honors from league coaches for second consecutive year. He was targeted 40 times in the regular season and allowed just 13 receptions while defending 13 others (4 interceptions)

So what is the knock on Phillip Gaines?

There's not much negative out there on him and not that much writeup on him either. He does have some injury history that cut short his 2011 and 2009 seasons but he has played the past 2 seasons with no problems. Also, let's face it, the Conference-USA isn't exactly the SEC. The one regular season game this year Rice played somebody (Texas A&M), Gaines was suspended for violation of a team rule. Details of the broken rule weren’t disclosed.

Could he be a NY Jet?

Absolutely. I think he would be a good 5th round selection and a steal in the 6th or 7th. We have a lot of picks this year so no excuse not to take a flyer on this kid. it will be interesting to see how he does at the combine.

-Phillip Gaines turned down an invite to the Senior Bowl and opted to play in the East/West Shrine game.

Would you draft Phillip Gaines to play for the NY Jets?