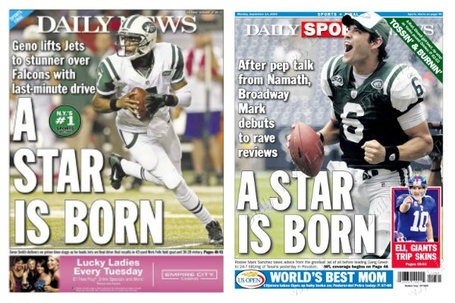 To the eye the rookie seasons of Geno Smith and Mark Sanchez might look similar. In some cases they couldn't be farther apart. Below I will break down the differences to show exactly who had a better rookie campaign.

Mark Sanchez came to the Jets when the team was already built for success. A strong offensive line and power running game ruled the day. He played with one of the best defenses Rex Ryan has fielded in his time as a head coach. Geno Smith came to the Jets after a fire sale on veterans that left the team devoid of talent. Mark Sanchez lead the Jets to the AFC Championship game. Geno Smith lead the Jets to an 8-8 record. They both suffered their fair share of terrible moments, and even some heroic wins.

First, lets look at some general stat comparisons and then break it down farther.

With that said, let's look at them from an accuracy perspective.

Completion percent is a term that we are all familiar with. Its a good benchmark for how frequently a QB's pass will end in a completion. This stat isn't perfect, and a more accurate stat is the accuracy percent. This takes into account drops, throw aways, spikes, batted passes, and when a QB is hit as he throws. In this stat Geno begins to emerge. Geno's receivers did less to help him out than Mark's did. His receivers posted a drop percent of 5.9 while Mark's receivers recorded 5.5. Let's break down the accuracy a little farther. What about the deep ball.

Geno was asked to throw the long ball more frequently, and did so much better. To put in into perspective, Mark Sanchez ranked 14th in long ball accuracy in his rookie season. Geno Smith ranked 3rd behind the Super Bowl QB's Peyton Manning and Russel Wilson. Of the two Jets rookies, Geno has a much stronger arm.

Throwing the deep ball isn't all it takes to be a QB. What about courage under fire? Let's look at their stats from an under pressure perspective.

These stats begin similar, but then split. Sanchez and Geno completed the same percentage of their passes. The biggest difference is in the percentage of dropbacks where the QB's saw pressure. With the outstanding 2009 offensive line Mark Sanchez only saw pressure 96 times. That was good for only 23.6% of the times he dropped back to pass. Geno Smith with a makeshift 2013 offensive line saw pressure 217 times, or 42% of the times he dropped back to pass. The other number which should jump out at you is the percentage of times that pressure resulted in a sack. While Geno was pressure far more often, he allowed that to become a sack far less often. While avoiding the sack, he was also able to be a more accurate passer, as shown by the accuracy percent. In this case, the accuracy percent was able to uncover that Geno's passing stats were more negatively affected by drops and throw aways.

So what about plain old fashion NFL QB Rating? Well, it falls in line with the other stats.

What about rushing? Mark showed similar grit to Geno in many cases putting his body on the line. Geno is known to be a far more talented scrambler. Let's see how that compares.

Its clearly visible that Geno is the superior runner both from a statistical view and an eye test. What this tells us is that Geno was a capable runner in designed runs, and in times when the play broke down. His lower sack rate could be attributed to his ability to recognize when he could get away using his legs and taking the opportunity. This coupled with the fact that he threw the ball away more than Mark Sanchez could be a reason why Geno was pressured far more, but sacked a fewer percentage of the time.

I keep mentioning percentages, but exactly how many times did Mark Sanchez get sacked, and how many times did Geno get sacked? Mark Sanchez was sacked 26 times. Geno Smith was sacked 43 times. There was much to do about the number of sacks that Geno was taking through the season. I heard many people attribute it to Geno, and while this is partially true, it's not telling the entire story. He was playing behind a vastly inferior offensive line and throwing to inferior receivers. To put it into perspective, if Mark Sanchez had attempted as many passes as Geno Smith, and maintained his sack percentage from 2009 he would have been sacked 52 times if he were surrounded by the talent Geno has.

As a fanbase, we have become jaded by Mark Sanchez. He gave us hope, strung us along for 3 years, and did nothing with it. He arrived with great fanfare. The feeling after Mark's first seasons was that he was improving and that he was the "Sanchize". The sentiment is far different for Geno. Even though he out performed Sanchez in every facet of the game, we all seem to think he is only capable of following directly in Mark Sanchez's footsteps. What I hope to have shown is that Geno Smith is a superior athlete. I did this by showing his arm talent, both in the deep ball and in accuracy. I also did this by showing his ability to run and scramble. I also hope I showed that he is a more intelligent QB. I did this by showing his ability to throw a higher percentage of balls away, and his ability to read pressure and react with his legs. As for how they ended their seasons. In the final month of the regular season Mark Sanchez graded out as -3.8 by PFF. Geno Smith graded out at 3.4 for the final month of his season.

I am not saying that Geno is the QB of the future, but the absolute hatred which I see posted about him on here I feel is uncalled for. It is being directed towards a rookie who people say is exactly like Mark. I hope I have shown how he isn't.