What Do You Think of the New York Jets Uniforms?

Is it time for a redesign?

Share All sharing options for: What Do You Think of the New York Jets Uniforms?

When the National Football League switched from Reebok to Nike as their official uniform brand, teams had an opportunity to change the design of their jerseys and logos to a more cutting edge and modern design. Only the Seattle Seahawks truly took up a complete re-design, but other teams such as the Miami Dolphins and Minnesota Vikings have had some minor changes done to their logos. The New York Jets didn't really have much of a change, although the jerseys look a bit differently due to different materials and such.

However, that hasn't stopped people from speculating or proposing new jerseys. One such fan proposal involved a reversion to an older team logo and heavy use of the color black: 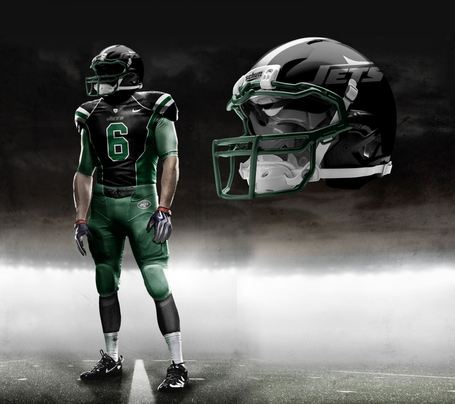 Personally, I love the idea of going back to the old logo. It's so iconic and not as bland as a football around the name. I'm not so sure about the heavy black design in the above proposal, although I do prefer the hunter green of the current uniforms as opposed to the kelly green of the older ones. What do you think? Is it time the team has Nike update the design of the jerseys and team logo?

"@michaeljaden: Hey Mr. @woodyjohnson4 can we get the team in the 90's uniforms for throwbacks this year? We're considering this, thanks.