The Year the New York Jets Conquered the World

In 1968, the Big Mac was introduced to the nation. 60 Minutes premiered on CBS, "Hey Jude" was released by the Beatles, and "2001: A Space Odyssey" was released. The next year, in 1969, the Woodstock Music & Art Fair was flooded with approximately 400,000 visitors, Senator Edward "Ted" Kennedy drove his car off a bridge at Chappaquiddick, and Neil Armstrong and Edwin "Buzz" Aldrin landed on the moon.

Joe Namath was "the greatest athlete I ever coached." -Paul "Bear" Bryant

At the same time, there was no bigger star than Joe "Willie" Namath. Broadway Joe had captured the attention of the nation with his long hair, fur coats, and unabashed nature. Namath was a pop culture icon, and a damn good quarterback. Namath had been a star at the University of Alabama, and had one of the quickest releases in football history. Before knee injuries would take their toll, Namath was an excellent running quarterback as well.

When Namath signed with the Jets, his four-year rookie contract was worth $427,000 (just over $3,000,000 today, accounting for inflation), including a $200,000 signing bonus and a salary of $25,000 per season. In addition, his three brothers and brother-in-law were given scouting jobs with the team, and Namath was given a Lincoln Continental. This record-breaking contract signified his status as a premiere signal caller. Namath would end his career as a 4x AFL All-Star, Pro Bowler, 2x AFL MVP, Comeback Player of the Year (1974), Super Bowl MVP, and a member of the Pro Football Hall of Fame. The year before, in 1967, Namath threw for 4,000 yards, the first quarterback to do so. That record would not be broken until 1979, twelve years later, by Dan Fouts, who had an extra two games in the season (in 1978, the National Football League expanded the season from fourteen games to sixteen). In 1967, the Jets went 8-5-1, finished second in the American Football League East Division, and missed out on the playoffs, which consisted of a single Conference Championship between the Oakland Raiders and the Houston Oilers. The Raiders would eventually be stomped by the repeat champion Green Bay Packers 33-14 in Super Bowl II.

A team has been favored by more than 13.5 points in just eight out of forty-seven Super Bowls.

Before the AFL and the NFL merged in 1970, the AFL was considered clearly inferior to the superior NFL. All the best talent went to the NFL, and the AFL had to offer massive contracts (see Namath, above), to lure players to their upstart league. In Super Bowl I, the Packers dominated the Kansas City Chiefs 35-10, and then the Raiders 33-14 in Super Bowl II.

The Jets went 11-3 during the regular season, winning the first two games against the Chiefs and the Patriots before losing on the road to the Bills 37-35. Namath threw 280 yards on forty-three attempts, completing just nineteen passes. Despite this, he passed for four touchdowns and five interceptions (three of which were pick-sixes), leaving just ten passes that didn't result in points or a turnover. In fact, the final two touchdowns scored by the Bills were off interceptions from Namath.

Despite this poor showing, the team rebounded against the Chargers before falling to the Broncos. At that point, the Jets were 3-2, and things weren't looking good. Namath had already thrown twelve interceptions, with the team relying heavily on the stud running back tandem of Snell and Boozer. After five games, Snell had rushed for 264 yards and a touchdown, while Boozer ran for 236 yards and four touchdowns. Together, they were averaging 100 yards per game.

Two New York Jets receivers have broken 1,000 yards in the same season six times in team history, with Don Maynard being involved in four of the six.

At that point, just over a quarter of the way through the season, the Jets went on a tear, just losing one more game to the Raiders in a shootout. In the remaining nine games, the Jets averaged over thirty points per game, while holding their opponents to under seventeen points per game. The team ended up rushing for 1,608 yards, or 114.9 per game. Sauer led the team with sixty-six receptions for 1,141 yards, and was closely followed by Maynard, who had fifty-seven receptions for 1,297 yards. For the second year in a row, both Sauer and Maynard each broke 1,000 receiving yards. 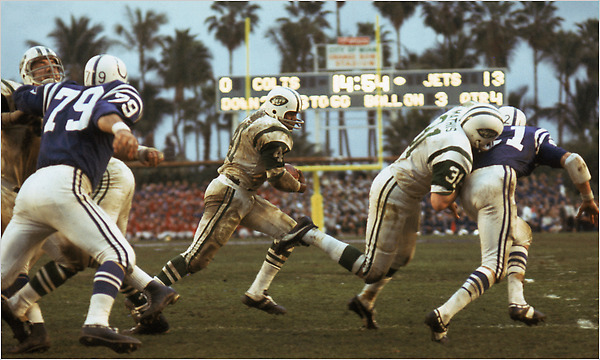 However, the loss to the Raiders, now known as the Heidi Game, would immediately enter football lore. With 1:05 remaining in the game, Jim Turner kicked a twenty-six yard field goal (he went 4/4 that day) and the Jets took a 32-29 lead. At that point, the time was 7:30pm EST, and NBC had scheduled the movie Heidi to begin then (most games took two-and-a-half hours at that point, and NBC had allotted the game a three hour slot), and cut away from the game to show the movie everywhere but the West Coast. Fans were outraged, and calls began pouring into NBC headquarters in New York demanding that the last minute of the game be shown. The Jets and the Raiders were bitter rivals, and the two best teams in the AFL.

"When the Jets played the Raiders, it wasn't a rivalry. It was a war." -Frank Ramos, Director of Public Relations, New York Jets

Although NBC quickly decided to put the game back on the air, they couldn't communicate that to their headquarters, which continued to air Heidi. In that last minute, the Daryle Lamonica of the Raiders threw a forty-six yard touchdown to take the lead 36-32. On the following kickoff, Earl Christy of the Jets fumbled at the ten-yard line, and the Raiders rushed the ball in quickly to win 43-32, all within the last minute of the game. Fans were furious to see a ticker on the bottom of the movie telling them the final score, and had no idea what happened. As a result of the Heidi Game, networks will not cut a game off before their conclusion before evening programming begins, and special telephones were installed at network headquarters to allow easier communication.

Following the regular season, the Jets faced the Raiders yet again in the Conference Championship; the winner would go on to the Super Bowl. In some ways, this match up was similar to the 2010 AFC Divisional Game between the Jets and the New England Patriots. The Jets had been defeated earlier in the season (although in 2010 they were blown out 45-3) by their hated rivals. They were seeking retribution, and they wanted to avenge their earlier loss.

In the Conference Championship, Namath threw for 266 yards (Maynard caught six passes for 118 yards, and Sauer caught seven passes for 70 yards) and three touchdowns, while Snell and Boozer combined for 122 yards. The Jets would win 27-23 on a late fourth quarter six-yard touchdown pass from Namath to Maynard. The game was sealed when Lamonica misfired a lateral to Charlie Smith, and LB Ralph Baker recovered, giving the Jets possession of the ball and the win and advancing them to Super Bowl III.

In Super Bowl III, the Jets would face the NFL's best team, the Baltimore Colts, who had only lost one game that season. The Colts had cruised to the Super Bowl by defeating the Cleveland Browns 34-0 in the NFL Championship, and were led by Head Coach Don Shula, the Associated Press' Coach of the Year, and quarterbacked by Earl Morrall, the Associated Press' Most Valuable Player.

"We're going to win Sunday. I guarantee it."

The only time a team has been favored more than the Baltimore Colts in a Super Bowl was in 1995, when the San Francisco 49ers were favored by 18.5 points over the San Diego Chargers.

Heading into the game, the Colts were favored by eighteen points, a Super Bowl record that would last until 1995. Nobody expected the Jets to win. Three days before the game, Namath was being honored by the Miami Touchdown Club as its Player of the Year. After a heckler mocked the Jets, Namath issued his now famous guarantee that the Jets would win the game. As Namath later said, "It was not planned, it wasn't premeditated; it was just anger and frustration, and I really believed we were gonna win the game."

"Former Jets center John Schmitt, who lives in Brookville, remembers the first moments of the fallout from Namath's prediction.

"The next morning, I'm sitting at one table with my wife, and Joe's with his girlfriend, a beautiful woman named Suzie Storm,'' Schmitt said in a telephone interview.

Schmitt noticed coach Weeb Ewbank walking up to the table, a newspaper under his arm, and looking angry.

"Joe says to Ewbank, 'Is there something wrong?' So Ewbank opens up the Miami Herald and points to the headline that says, 'Namath Guarantees Win.' Then he says, 'Joseph, did you say that?' ''

Namath says he did.

"Weeb is just tearing into him,'' Schmitt said. " 'Why'd you do it? You know what they're going to do with this article? They're gonna put it up on their wall and they're gonna go try to kill us.'

"Weeb just walked away and shook his head,'' Schmitt said."

The game took place in Miami, Florida, at the Orange Bowl. The temperature was sixty-six degrees. However, Maynard had a pulled hamstring; an injury few knew about. Despite his 112 yards against the Raiders in the Conference Championship, Maynard was hurting. The Colts went into the game with a plan of focusing their defensive efforts around stopping Maynard, not realizing he was to be used as a decoy. The Jets' game plan was simple; run the ball, and limit passes to short, high-percentage passes.

"You could almost feel the steam go out of them." -Matt Snell

The Jets won the coin toss, and elected to receive. On the first drive of the game, Colts free safety Rick Volk sustained a concussion and left the game. After a Jets punt, the Colts drove the ball, but missed a short 27-yard field goal. The Colts were terrified of Maynard, who had averaged 22.8 yards/reception during the regular season, so they rotated their zone defense to cover the injured receiver. Sauer went into the game knowing that CB Lenny Lyles had been suffering from tonsilitis the week of the game, and capitalized on the one-on-one coverage,Â  totaling eight receptions for 133 yards.

After a wild interception near the goal-line by Morrall, the Jets rode Snell (who ran for 121 yards on 30 attempts) behind Hill, who was manhandling DE Ordell Braase, to a touchdown to make it 7-0. It was the first time in Super Bowl history that an AFL team led the game. At that point, the Colts' odds of winning the game dipped to 26.10%, and they would never recover.

Joe Namath is the only quarterback to win the Super Bowl MVP without throwing a touchdown pass.

With four minutes left in the third quarter, Morrall was benched for the aging Johnny Unitas, who had a sore arm and simply wasn't healthy. By the end of the third quarter, two additional field goals by Jim Turner had made the score 13-0 in favor of the Jets, and another field goal early in the fourth made it 16-0. A late drive by Unitas ended with a touchdown, and the Colts recovered the onside kick before driving the length of the field and failing on fourth down in the red zone. Soon after, the Colts' comeback ran out of time. On January 12, 1969, the New York Jets had conquered the world.

photo courtesy of the Associated Press