An Introduction to Rakeem Cato

Welcome to The Sleeper Series, profiles designed to give an inside look into NFL prospects that are under the radar. Everyone that watches ESPN knows about Jameis Winston and Todd Gurley. Highlights of Marcus Mariota are on SportsCenter every week, and Amari Cooper is widely known as one of the best wide receivers in the 2015 NFL Draft. Here, we will meet the players that aren’t as well known, but may develop into superstars.

Meet Rakeem Cato, a true senior at Marshall University. Cato is a four-year starter for the Thundering Herd, which is currently 8-0 in the Conference USA (C-USA). Cato is considered a dark horse contender for the Heisman Trophy, the award given annually to college football's most outstanding player. Although it is unlikely that Cato will win this prestigious award, he is still one of the best quarterbacks in Division I football. He's won the C-USA Most Valuable Player and Offensive Player of the Year. He won the Military Bowl MVP in his 2013 victory over the University of Maryland, and he was just named a semifinalist for the 2014 Maxwell Award. What follows is a complete scouting report on Cato, a prospect unknown to many football fans.

Liberty City is one of the worst neighborhoods in Miami, Florida, if not the country. Crime and poverty are rampant in the projects, and many don't make it out alive. Rap star Luther Campbell explained by stating that "Liberty City is no different than Afghanistan. The only difference is you do not have roadside bombs. I mean, seven, eight people get killed a day in Liberty City in that hole between the Pork 'N' Beans and Scott (projects)."

This is where Rakeem Cato grew up, and it's a miracle he made it out alive. Rakeem's father was imprisoned before he was born due to an armed robbery, and Rakeem lived with his mother and six siblings. Where they lived was so cramped that Rakeem reportedly shared a bed with his mother until he was eleven years old. Juannese Cato worked two jobs to take care of her seven children, and took in three other children when her close friend passed away. She was, by all accounts, a remarkable woman that somehow managed to keep a family together in those difficult times.

That all changed when Rakeem was thirteen. His mother suddenly became sick from pneumonia and died just four days later. She was only thirty-nine years old. Rakeem's eighteen-year-old sister, Shanrikia, was granted custody of all but one of her siblings, who was older and had already moved out. It was, as Shanrikia said, "a struggle. I was scared I couldn't keep custody, that they might take the kids, but I kept them in school, paid all the bills and took care of them as much as I could. It was rough, and sometimes I wanted to give up but I kept praying, kept going day by day."

Rakeem's childhood was cut short, and despite Shanrikia's efforts to keep the family together, had to stay with friends for days or weeks at a time. As Rakeem grew up, he became "mad at the world" due to his situation and developed a temper, prone to outbursts. In high school, he was nearly kicked off the football team. Rakeem had been benched at halftime because the team was winning so much, and started yelling at the coaches that they shouldn't have benched him and that they made a bad decision. He wanted to play the whole game and hated taking even a single snap off. Every coach voted him off the team, except for Campbell, who stuck by Rakeem's side and became responsible for helping Rakeem grow up. As a result, he was allowed to stay and eventually led the team to a state championship.

Ultimately, Rakeem wasn't highly recruited, despite being reputedly more popular in the area than Teddy Bridgewater, who also came from Liberty City. He weighed under 150 pounds and was only six feet tall. Although he initially planned on going to nearby Florida International University, his best friend Tommy Shuler was planning on going to Marshall University as a wide receiver. The two are best friends, and Tommy convinced Rakeem to join him. It quickly became apparent to head coach John "Doc" Holliday that Rakeem was the best quarterback on the roster, and started him as a true freshman.

Rakeem led the team to five come-from-behind victories as a freshman.

But again, Rakeem's temper got the best of him. He would beat himself up over mistakes, and yelled at teammates when they messed up. He wanted to be a leader, but didn't know how. He was so competitive that he felt he had to be perfect on every snap. Holliday, who coached Philip Rivers and Tim Tebow, has said that Rakeem is the most competitive player he's ever seen. Six games into his freshman season, Rakeem lost his temper when he went 11-for-29 against the University of Central Florida. Holliday benched Rakeem for the next four games. As Holliday explained, "I had to do it. He wasn't going to learn any other way. For eighteen years, no one told him when to get up or go to bed. He never had anything to eat before he went to school. He fended for himself. To come in as an eighteen-year-old kid and play quarterback for us, he wasn't ready. But we had to play him and had to live with some tough times. He's grown from it." When Rakeem became the starter again, he finished the season with three consecutive wins, including a bowl victory over Florida International.

After his freshman year, Rakeem knew he had to change. He began meeting weekly with offensive coordinator Bill Legg and a few teammates, trying to learn how to become a leader. According to Legg, "As a freshman, it was going to be hard for people to follow him with how he managed his frustration. By August of 2012, he was a different guy. He was the same guy, same competitor, but how he was managing it was completely different." Holliday continued, "He's learned to control his emotions. His competitive nature, that's still the same, and we didn't want that to change. He always wants to win."

Rakeem started talking to Marshall legend Chad Pennington on a regular basis, most of whose records he's broken, learning how to lead the team. Pennington still lives in the area and has taken the young quarterback under his wing. Rakeem has learned how to channel his emotion, and now uses it to his advantage. If you watch a game, you'll see him prowling up and down the sideline, cheering on his defense and encouraging his teammates. Although he started his career alienating his teammates, he now uses his passion to be the heart and soul of the Thundering Herd. The adversity that he's overcome is why Holliday thinks Rakeem is so good in the clutch, because that kind of pressure is nothing to him.

"Some [quarterbacks] are relatively emotionless (e.g. Eli Manning). Some always keep the game light and fun (e.g. Brett Favre). Others (e.g. Dan Marino) burn hot and keep that temperature up the whole time. Rakeem Cato is the latter. His intensity runs high and he keeps it there the entire game." - Chris Kouffman 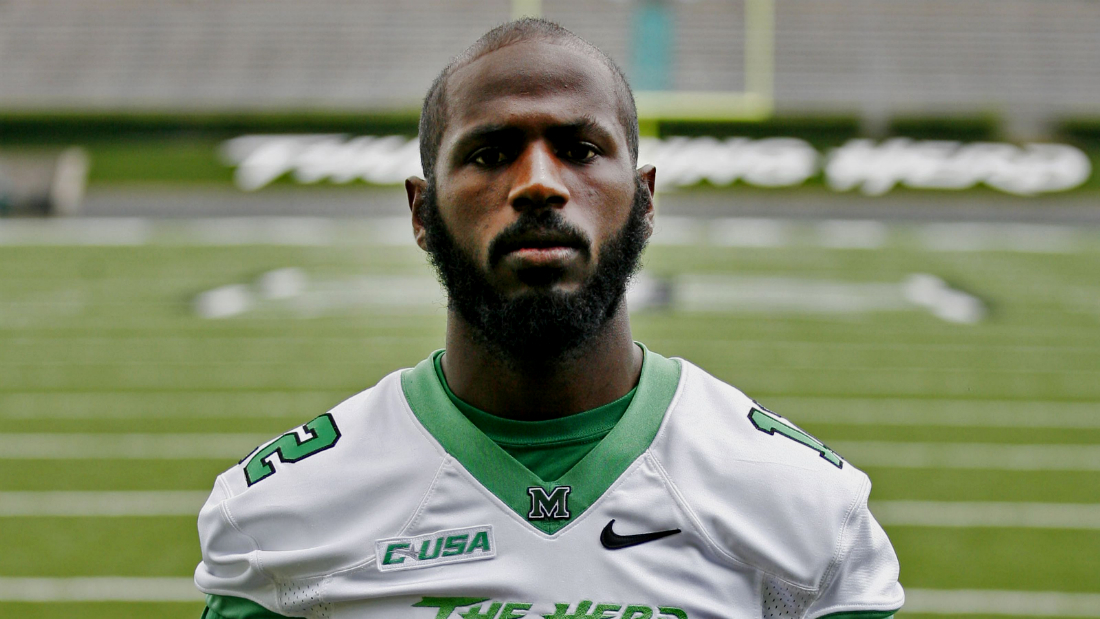 To provide some context on Rakeem's statistics, mainly his completion percentage, it's important to remember his supporting cast. Rakeem doesn't have an Amari Cooper or Kevin White. You'll never confuse Marshall's weapons with Florida State. His best receiver thus far was Aaron Dobson, early in Rakeem's college career. The only other well-regarded current member of the offense is Devon Johnson, a running back.

Rakeem's completion percentage is also lower than one might expect because he throws an abnormally high number of deep passes on first and second down. In fact, Rakeem has thrown 95 passes on first down this season to 66 on second down and 62 on third down. His supporting cast means more of those throws are into tight coverage. Unlike other spread quarterbacks, he isn't padding his stats with screens and check downs, and yards after the catch is a fairly foreign concept with a less dynamic receiving corps. It was only in 2012, when Marshall used a quick passing game, that Rakeem's completion percentage was particularly gaudy. Notably, he's thrown 66 career touchdown passes in the red zone to just one interception.

Despite this, his third-down efficiency is second in Division I football only to Jameis Winston. He currently has a 135.7 NFL passer rating on third-down. In fact, in 2013 he averaged over 13 yards per completion and is currently averaging over 16 yards per completion in 2014. From 2012 until today, Rakeem has converted 34% of his 3rd and 10+ situations. In contrast, Marcus Mariota has converted only 19% of his 3rd and 10+ situations over the same period. Most of his yardage comes through the air, instead of after the catch. While Mariota fumbles the ball every 2.2 times he’s sacked, Rakeem fumbles it once every 8.1 times. Context for statistics is important, especially in college where offensive systems and opponents can vary so much.

Although Rakeem hasn't played the greatest of competition in the C-USA, you can only play who your competition is, and he's sitting at 8-0 this season, one of only a small handful of FBS teams currently with that record. His closest game this year has been Miami University of Ohio, and the margin of victory was by over two touchdowns. Rakeem currently holds the Division I record for most consecutive games with a touchdown, at 40. The previous record holder? Russell Wilson.

Largely due to his size and level of competition, Rakeem will be a late round pick or an undrafted free agent. He is likely a developmental prospect as he needs to add some weight to his frame and learn a pro-style offense. I've seen his playing style compared to Teddy Bridgewater and Aaron Rodgers.

The New York Jets would be well served by drafting Rakeem late or signing him if he becomes an undrafted free agent. He isn't a Day 1 starter, but he has the potential to become a good player in this league if he's allowed to sit on the bench and learn.