Any consideration of the value of Percy Harvin has to include this stark fact. He has missed 23 of his last 29 regular season games. No matter how shrewd a shopper you are there have to be serious concern when it has been nearly 2 full seasons of games since Harvin was a regular contributor to an offense at a high level. At most what you are hoping for is to reclaim the lightening that was in the bottle several seasons years AGO. But, laying that projection into the past aside, what I want to examine here is just how productive Percy Harvin has been, in particular, out of the slot (which is primarily where he has played). Approximately 65% of his offensive plays have been as a receiver in the slot: 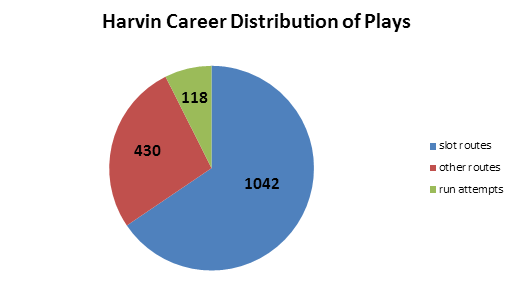 The above reflects a combination of data from more than one source so it will not necessarily match up against a particular source, but it is close enough. I'm unable to distinguish receptions when coming out of the backfield as a RB and those as an outside receiver, which is unfortunate because those are different roles and skills. But, what one can see, in the next graphic, that of all the positions he has worked from the LEAST effective productivity in terms of yards per route has been in the slot. Routes from the slot have averaged 2.07 yards, routes from elsewhere have averaged 2.98 yards (and runs have averaged 6.6, leaving out plays from RB that were nether runs or passes). 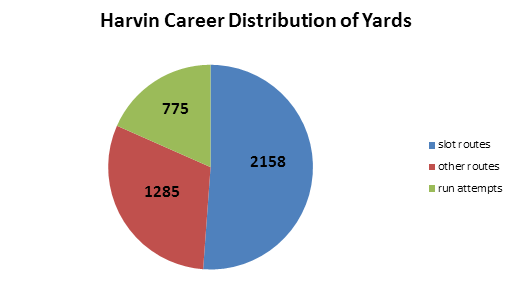 On its own, this is no red flag. Slot receivers in general are short yardage pass catchers, and anyone with eyes can tell that Harvin is so dynamic he must be breaking big plays from the position, at least when compared to other slot receivers. So what I did was assemble all the slot performances in the NFL (using the PFF50 data break - adding in Harvin's production data when he missed the cut-off) for each of Harvin's 5 seasons, leaving out 2013 which constituted 1 pass in the regular season. And I ranked each of those season performances top to bottom along different criteria to see where Percy Harvin ranked against others in the slot. Just how good was this guy from the position he predominantly played from? Are the Jets indeed getting one of the top slot receivers in the league?

The way I graphically represent rank is on a scale of 1 to 100. If you are at 100 in a category it means out of the 5 NFL seasons you had the best season when compared to your peers. There were 112 seasons measured. If you were at one (1), then you had the worst season in that category, of all 112. The partial 2014 season was included in this data, and unfortunately this year Percy is ranked last of all 112 seasons, in some categories.

The Most Thrown-To Slot Receiver in the League 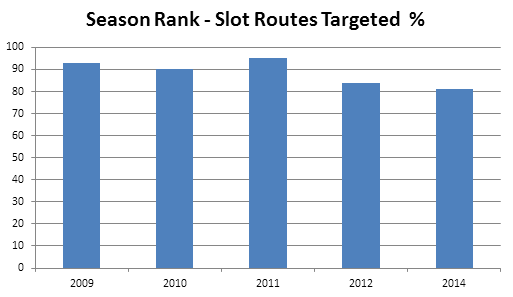 Above shows his season rank by percent of slot routes that resulted in targets. Even in this very poor year he still is above the 80% mark. This could of course mean that he is open a great deal, but it also shows that teams have made a great effort to get him the ball. All 5 of his seasons rank in the top 21 of high percentage of targeted slot routes. Below you can see the most loved slot receivers by season (the colors are my distinguishing of seasons for myself): 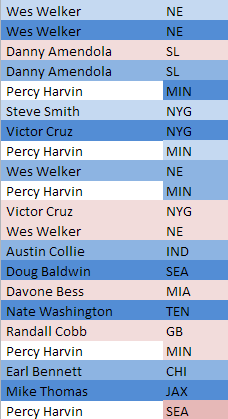 In fact, if you look at all of Harvin's routes, he's the most thrown to receiver in the league, 3rd in 2009, and first in 2010, 2011, 2012 and 2014 (by percentage of routes thrown to). At the very least one could say that Harvin has not been ignored by any of the offenses he has played in. Instead he's been funneled the ball. And in fact, not only that, when you throw him the ball, he catches it. Below are season ranks for catch rates from the slot: 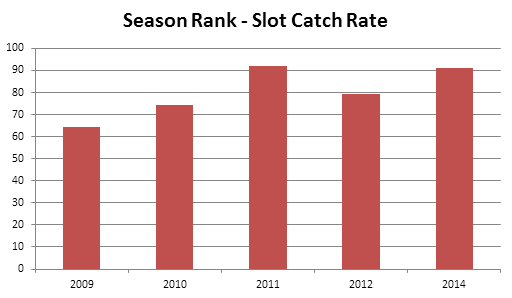 He actually has improved in this as a general trend in the slot, after his rookie of the year performance in 2009, catching the ball at a high rate when compared to his peers.

So what is not to love. Offenses are feeding him the ball, he is catching the ball, sounds like a perfect player. The question comes when you look at his yardage production from the slot, especially when compared to his peers. First, let's look at my favorite receiver stat: Yards per Target: 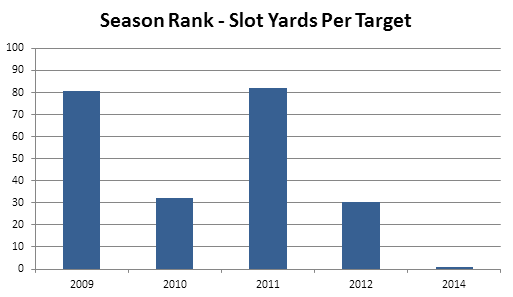 What is going on here? Two very nice years for the Vikings (his rookie year and 2011), but two poor yardage production years in 2010 and 2012, barely hitting the 30 percentile, at least as far as NFL slot production goes. And then this year, dead last in YPT. What is notable about this is that in all these seasons he is catching the ball at a high rate. His targets are producing "some" yards pretty frequently, but still his YPT, on the whole, are not elevated. The explanation is that despite having electric athleticism, and despite being targeted and catching the ball frequently, he simply has been doing little with it when he catches it.

The suspicion that this is the case is further bolstered when we look at his Yards per Reception against other slot receivers: 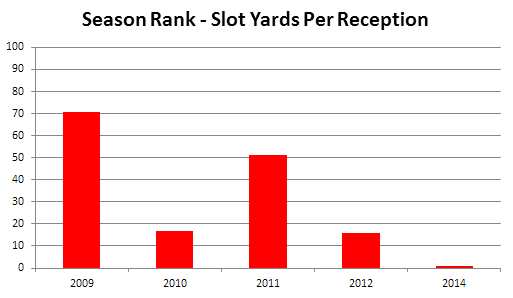 Even in his NFL christening year as a rookie he was not dominant in YPR production, but since that year he has been in a thorough decline. With the exception of 2011 where he is merely average, he has been in the bottom 1/6 of the league by such a measure. When one would imagine that his electric speed would be producing at least more than his fair share of breakaways, something to float his yards per catch up, it simply isn't the case, at least from the slot.

The answer to what is going on here is that there are different sorts of receivers in the slot, and Harvin is a very particular sort. Harvin just isn't the Colston, Cruz, Jennings type slot player, a player who takes a play deep, ever threatening to do so. His yards per catch averages are much more in line with the Amendolas and Welkers, nifty guys who wriggle and make the catch, run a few yards then go down.

What This Means for the Jets

John B. wrote a very nice piece detailing how Harvin and Kerley can play together. There is the temptation to see Harvin from afar and project his athleticism into yardage, imagining the big plays he's going to bring. But the fact is that from the slot he really hasn't been a big play producer by and large. From the slot he is a possession receiver, not a game breaker. And he goes along side our other possession receiver Kerley.

In fact, as an aside, you can compare the production that has come from the slot by the top Jet slot receiver (by rank) and Harvin, and see that at least in terms of yardage efficiency the Jet slot receiver has out performed Harvin since 2012: 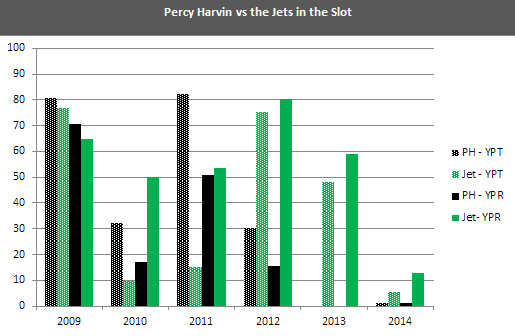 But what we are also getting is - aside from the potential headaches, chemistry issues and injuries - a continued shrinking of the field. Already the Jets have tried to stretch the field horizontally, and shrink the areas where Geno has to look. This is just doubling down on the strategy with a possession receiver who is used to being thrown the ball. Defenses will continue to creep in, loading up on Jet running backs and the short game.

If any evidence needs to be had that this will be a continued shrinking of the Jet Offensive field of attack one need only look at how Harvin's own world has been shrinking (either by OCs or by Defenses), ever since he burst onto the scene as a rookie. Below are the average yards in the air on for ALL completed passes by year (I thank Smackdad for the idea of this calculation). Passes over the last two years (3 years) have averaged traveling less than 2 yards in the air. 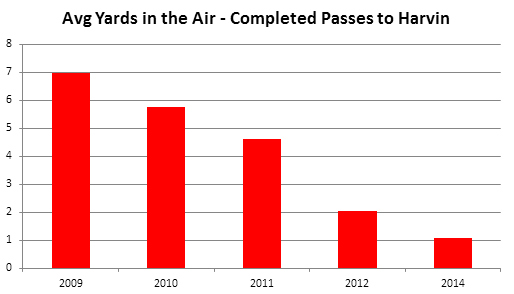 The problem is, this kind of attack relies on an accurate, intelligent and ultimately a consistent quarterback. And so far there are serious questions if Geno is that kind of field general. But one can see that the squeezing of Harvin mirrors exactly what they are doing with Geno Smith. He throws the shortest completions (measured by yards in the air) in the league so far, the average completion traveling only 4.5 yards in the air. 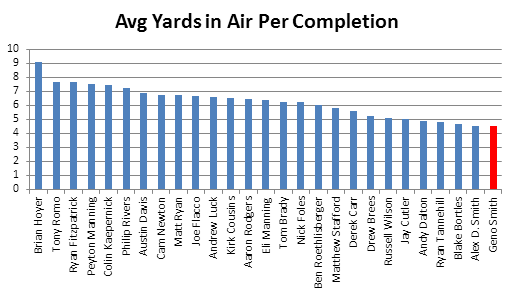 In fact, Geno Smith is throwing so short that since 2007 (7+ seasons) only 1 Quarterback has on average completed passes shorter than Geno Smith has so far this year (out of 214 quarterback seasons)...Christian Ponder of the 2012 Minnesota Vikings, Percy Harvin's last year with that team.

As usual, these are hand crunched stats, there could be errors.