Sometimes when I do research I find something that I really like that I can't tie to any currently relevant concept. I still like to share it when I can, though. You hear plenty of talk during the season about how Rex Ryan is a defensive genius, how he has exotic looks,  and how teams have to mix coverages and disguise fronts. I found a play from the October 20 game against the Patriots that kind of displays what some of these common sayings mean.

This is New England's first offensive play of the game. 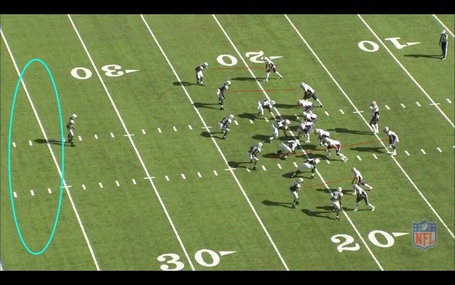 The look the Jets show before the snap is they are going to play aggressive man coverage with one deep safety. David Harris might be a blitzer or he might help in coverage. The Jets have three safeties on the field. That is not what happens, however. 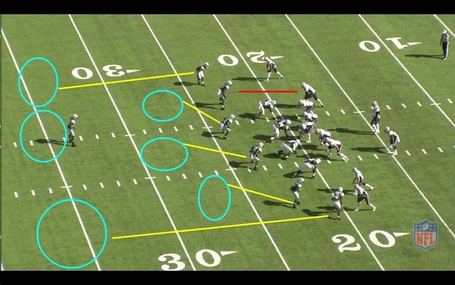 What is actually going to happen here is the Jets are going to play a cover three with the two cornerbacks, Antonio Cromartie and Dee Milliner dropping deep at the snap. It is possible Tom Brady will see the presnap look and think he will have one on ones deep on the outside, but with Cromartie and Milliner dropping, his receivers will be met if they go deep instead of running foot for foot with the cornerbacks. Jaiquawn Jarrett and the two linebackers, David Harris and Demario Davis will be in zone coverage underneath and sliding left at the snap. That is because Antonio Allen will actually stay in man to man coverage with Rob Gronkowski.

If you follow basketball, I would equate this to a box and one defense where you play man to man against the other team's best player and zone against everything else. This makes it exceptionally difficult to get the best player involved because he always has a man covering him, and whenever he moves to a new spot on the field, a new second defender is there to meet him. It isn't even a case where he can beat double coverage because entering a new zone will introduce him to a new defender. A combination defense like this is also a very difficult read for a quarterback when a guy can be covered both in zone and man coverage on the same play. 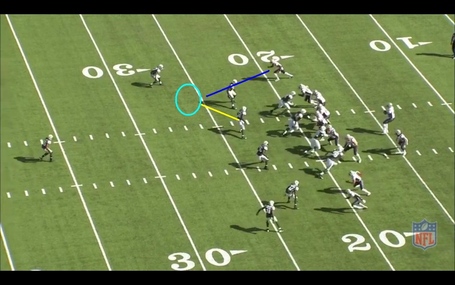 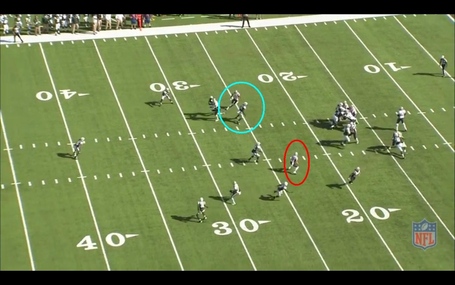 At the snap in the first picture, Brady thinks he has the Jets' defense caught. Milliner has backed off at the top of the picture, and Brady correctly assumes the presnap look was a disguise. He is right, but he thinks Milliner is still in man coverage but playing off. Instead Harris slides over to undercut it in the second picture teal circle. Brady has to pull it down. Fortunately for Brady, Julian Edelman in the red circle has read the coverage and sits in a hole in the zone. Brady goes to him for a three yard gain.

Was this significant? I'm not sure, but it might have laid the groundwork for the second half when the Jets had success against Brady in that game. While Brady has had some big games against Rex Ryan, there have also been contests where he has become totally flustered. This happens when he gets flustered because he can't trust what he sees. The Jets show him unfamiliar looks he isn't expecting so he hesitates. A quarterback has to be decisive and trust both he and his receiver see the same things. One of the reasons Rex Ryan is so successful as a defensive coach is he shows unusual looks that the quarterback isn't expecting. Enough of these over the course of a game make the quarterback more hesitant. This can mess with mechanics. We frequently see this happening in the front of the defense on television, but the coverages in the back of the defense do this also and frequently fly under the radar.

Showing new looks and disguising what you do is especially important against the Pats. I think one of the most surprising things when you watch their offense on film is how basic it is. They really have at its core a pretty simplistic offense. They have a couple of core concepts. It just looks complicated because they run their concepts out of a wide array of formations and personnel packages. When you do the same thing over and over, you get it down cold. You eventually know how to react to any situation because you run the same thing against the same look over and over. The defense has to throw something unusual and surprising to survive. That's what the Jets do and one reason Rex Ryan is viewed in league circles as a mastermind on the defensive side of the ball.