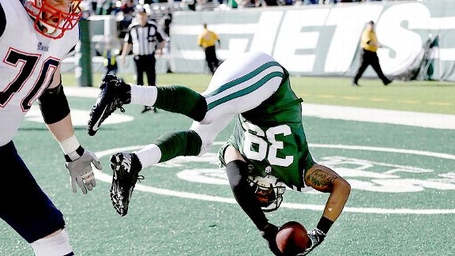 One player that I, along with many other Jets fans, are looking forward to seeing next season is Antonio Allen. Allen was drafted in the 7th round of the 2012 draft. As a 7th rounder, there is minimal expectation to make the roster, and even fewer expectations of starting and producing. He emerged in his second season in a single game against one of the toughest opponents in the NFL when he shut down All-World TE Ron Gronkowski. How will he progress in the future? Let's look back to the past in search of answers.

Allen was born in Ocala Florida, where he attended Trinity Catholic High School. He graduated from Trinity at 6'1 177lbs. In January of 2007 he committed to Folk Union Military Academy. As a Senior in HS he was rated as a 4 star prospect by Scout and a 3 star prospect by Rivals. Rivals ranked him as the 42 best Safety in the nation, and the 80th best player in his home state of Florida. After his season with Folk Union he was given a 4 star rating and was listed as the 23rd best prep-school prospect in the nation.

Allen attended South Carolina in January of 2008 and participated in spring drills. He was put in the strong safety position but also sniffed the Sam LB spot. He participated in only 4 games notching a total of 5 tackles. It was stated his lack of production and playing time was due to a focus on academics as he pursued a degree in African American studies.

in 2009 he was moved to the spur position. The spur is a position used by South Carolina which plays the role of a hybrid linebacker and safety. The Gamecocks use a 4-2-5 base defense, also known as the nickel. In this system the spur is used to play both the run or the pass depending on the formation and playcall of the offense. In running situations the spur will play downhill defending a runner or running lane. When given a passing situation like the spread offense, the spur will lineup and cover a TE or slot receiver. Their ideal mold is that of an extraordinarily speedy linebacker, or an extraordinarily physical safety. In this season Allen played in 12 games where he started 8. He collected 35 tackles, 22 being solo stops. In the Gamecocks bowl game loss to UConn he collected 6 tackles, all but one being solo.

2010 was when Allen came to life. He earned fourth team All-SEC team honors while starting 11 out of his 12 contests. He finished with 70 tackles, 10.5 tackles for loss, and 2.5 sacks. He was slowed in the first month of the season with a hamstring injury. After recovering from injury, he tallied no less than 5 tackles in any of the 10 remaining games. Allen's nose for the ball began to show this year. He caused a fumble on his first career sack against the dominating Alabama Crimson Tide. He also posted a monster game against Tennessee where he has 7 tackles, 4 tackles for loss, and 1.5 sacks. On one of those sacks, Allen forced a fumble which lead to a touchdown. Against Clemson he notched his first career interception, which he returned for a TD. Does that sound familiar? He was given the Ernest Brooks MVP award on defense that season. In the SEC championship game against Auburn his stat line read 8 tackles, 4 QB hurries.

In his final year with the Gamecocks Allen's stats read something like this:

He capped his season with a 7 tackle, 1 tackle for loss, 1 sack performance against #20 Nebraska in the Citrus Bowl.

What kind of picture does this paint of Allen's future? He was used sparingly his first season, and began to come on strong this season with more playing time. This is following the same track as his college career. The trajectory of many athletes changes once they enter the NFL. There is no hard proof that past performances will dictate future performances. I will leave you with this food for thought. Allen studied in his first season with South Carolina. He began to get more playing time and gradually became a playmaker. He doesn't wow people with freakish physical gifts. He didn't have those to fall back on when he was learning the in's and out's of his position in college or the NFL. He was a 3 star recruit [4 star at best] who made it in the SEC and dominated some of the top teams in the nation in his time there. He never made an immediate impact, but rather, gradually improved to become a team leading player. Knowing this, it leads me to have high hopes for his future. He has already surpassed Josh Bush, the safety the Jets drafted 1 round prior to Allen in the very same draft. He finished this season strong after many thought he would be a liability. His season was partially overshadowed by the acquisition of Hall of Fame safety Ed Reed. Allen immediatly attached himself to Reed's hip, another sign of a player who learns instead of overpowers. It could be attributed to many things, but before the end of the season, Allen was back on the field more than Ed Reed.

For all of these reasons, I deem Antonio Allen as an Ascending Player.