This edition of GGN chalkboard looks at a few plays/concepts that can lead to victory against the TB Buccaneers.

Share All sharing options for: Jets vs. Buccaneers Game Plan

The Bucs defense is a pretty aggressive defense that teaches everyone to swarm to the ball. On defense the Jets can use a heavy line to slow down the Bucs running game and also put some pressure on the pass. We'll break down a few concepts here that the Jets may use to win the game.

On offense there a few ways to beat an over-aggressive defense. The most obvious of them are draws and screens which every team seems to call at the wrong time. Play action works well too, although against a well timed blitz gets a QB killed. However, there's one play that can really cause havoc with the Bucs, and I think the Jets need to include in the playbook. That would be the Waggle pass concept.

Simply put, it's a flood concept to one side of the field with the QB rolling to that side. However, much more goes into it. It's also an option concept with the OLB having to choose between the TE and the QB.

So let's break this down GGN chalkboard style:

First off, the running game must be a threat for this to work. This concept does require play action and the threat of a run to really be effective. I'm going to draw up one of my favorite plays and show you how effective it can be with the personnel we have and how it can beat a defense that may overreact to a run.

Here we have a sample waggle play out of a single back, TE right, slot right formation. The call is a pretty simple one that you see every day on Sunday, but does have some wrinkles you may see in the WCO. (side note, the TE on this play could line up on the other side and run across the formation and do the same things) 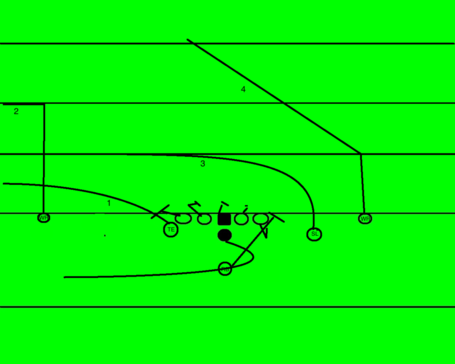 The QB fakes a outside sweep/off tackle to the weak side and immediately rolls to the TE side. This is perfect for a semi-mobile QB in Geno Smith who at this point looks to be more of a passer than runner, but does have more foot speed than Sanchez. I think he can use his athletic ability to really cause a defense issues with this concept.

The running back takes any blitzing linebacker off the weakside or helps the tackle/guard seal up the backside. The rest of the line is set in pass blocking with each trying to force his man away from the waggle and towards the weak side of the play. This play is set up by that play action by the RB, who largely is out of the play other than to seal up the outside.  (And possibly serve as a safety valve in case the CB/S/OLB keeps the play to the inside.)

As for the skill positions, the TE is the most important guy in this concept as he swings into the flat after chipping the outside rusher. All he wants to do is slow down the DE/blitzing LB and make the OLB choose to play him or go after the QB. If he whiffs on the block, this play goes kaput as the OLB has a free rush at Geno. However any decent block will give the QB enough time to get to the outside. The OT generally will try to help out the TE if no one else is coming directly at him, but also has to pick up any trailers coming from the inside of the line.

The TE is most often the primary receiver here. The reason is that this is an "option play" in a sense. If the OLB rushes the QB,  the TE will be open for a quick gain and possible Y(ards)A(fter)(Catch) type play. If the TE is covered, the QB won't have any man covering him other than the pass rushers, which he should out run and turn upfield. This is the option concept where depending on the OLB, the QB could throw or run up field.

Not only is the option play possible here, but so is the flood concept. The flood concept as detailed in a previous Chalkboard is good against any number of defenses. If I had to bet, I'd put Holmes on the left (strong side)who was great with the toe tap receptions along the sidelines. That 10-15 yard out would be a good test against Revis to see if he can still cut or against the other TB corners.

Rounding out the rest of the route options is our third man Kerley who runs a 5 yard Dig/In concept that has him running along  in between the TE and the WR. This is the guy if the defense is playing a strict zone that often finds himself in a hole for a 10 yard gain and a first down. However, because the QB has to throw a bit backwards, this doesn't usually lead to a huge play, but still earns a chunk of yards. As for Hill, here is his chance to beat the S or CB deep. This is probably the home run threat that every team hopes gets open once a game because it can lead to an easy 6 if the WR beats the coverage. Otherwise Hill is the last resort for a QB before he turns upfield.

Once again this play comes down to the chip of the TE and the ability of the QB to get outside the pocket and make the OLB make a decision. It's up to the safeties and corners to stop Hill from getting by them on the deep route and also prevent Holmes from getting separation on the 15 yard out. The defense can easily stop this play by getting to the QB early so this route concept doesn't have a chance to develop. That's the risk, but I think the upside of the play is much better.

So why do I think it's a very important concept that could win the game. Simple: if Tampa Bay is over aggressive, this will be effective to slow them down and possibly gain a chunk of yards in the process. It also allows Geno the ability to use his legs to possibly pick up a few yards. (Although the last time this happened it didn't work out so well against the Lions.) By slowing down the TB defense, it opens up the running game by forcing the LB and backside DL to stay put. That means the possibility of bigger holes and bigger gains by the running backs on straight ahead runs.

It alternatively also opens the third play in this series. That would be the fake waggle RB screen, which is to run the same play but have the RB stop and catch a screen on the backside with the rest of the routes being the same. If you remember the Jets circa 2002, Curtis Martin and Pennington hooked up on a few of these screens for some rather impressive yardage. It's an effective play if the run and waggle both work.

Defensively, the Jets should be aggressive on first and second downs formation wise. Take away the ability for the Bucs to run the ball and force them to beat us with Josh Freeman at the helm. How you say? Why simple, get the best three playmakers on the field at once for the Jets. Yes, that means going to a 46 bear defense and selling out against the run with our three best lineman. The Bucs to me seem like a run first team so why not force them into a secondary option. 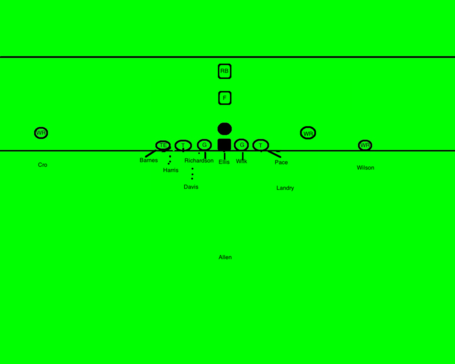 First off, this defensive line is going to beast. Ellis/ Big Snacks, Wilk and Richardson next to each other. How can you double team anyone in that formation on the inside? So either way there are going to be some issues for the line right in the middle.

I know Pace on the edge scares absolutely no one, but he can set an edge against the run every once in a while. So there he goes as our best OLB/DE option until Coples gets back. Barnes sets the tone on the other side as he gets the pass rush from the edge. Harris is good enough against the run so he helps out on that side, negating the fact that Barnes isn't known for his run stuffing ability. Basically, on that side you combine the pass rusher skills of one guy with the run stuffing skills with the MLB. Davis covers the weak side and the middle plus adds some versatility against the pass. He ends up covering any RB/FB plays while Harris covers the TE.

On the outside Cro and Wilson are the best corners, although if Wilson struggles, throw in Walls as a replacement.  I do have faith in them both to cover Jackson (Cro) and Ogletree (Wilson).  I think we can shut down Tampa Bay's passing offense in the first and second downs while selling out against the run. Somehow Rex always seems to get great corner play, and I can't see that changing now.

As for the safeties, that's where the tough part is, mostly because Tampa Bay doesn't have a great TE to make us afraid and is more of a running threat. Do you have faith more faith in Allen to cover the run which is more important here, or not get beat deep despite playing a deep, deep center field? In this defense, I'd rather put Landry up front and let him go loose against the run or play the slot man-to-man. Allen probably is going to have trouble no matter where, but putting him that deep gives him a chance to at least keep everything in front of him. Be aware that the safety in this defense plays 25-30 yards deep and basically is the guy that rarely if ever backs up.

To sum it all up:

On defense I'd advocate selling out against Doug Martin and the running game and force Josh Freeman to win the game through the air against Cro, Wilson and Landry. On offense, I'd suggest moving the pocket with a lot of misdirection including the waggle pass, hoping that this prevents the defense from selling out against our running attack.

That's my game plan for Sunday. What do you think we will see?