Daily links to articles about the NFL's New York Jets.

And then you realize, it's only Thursday.  Here are your daily New York Jets links, Gang Green Gangsters...

J.P. Pelzman: The new Rex Ryan is staying level-headed despite the early season success.  Well, yeah, they're still 3rd in the division.

Michael J. Fensom: The Jets demonstrate an agressive approach with Geno Smith and Marty Mornhinweg.  Hopefully they'll have a long time of success together for at least a decade of aggression.

Randy Lange: Geno and the receivers provided a blast from the past.

Seth Walder: Stephen Hill says that Geno wants to be a franchise quarterback.

Darryl Slater: Sunday's game is a homecoming of sorts for Matt Simms.

George Willis: Bilal Powell could win the battle against the Tennessee Titans.

Kristian Dyer: Former Hofstra RB Kareem Huggins gets a chance to resurrect his career with the Jets.

Charlie Frankel: The Jets face a tall takeaway challenge against the Titans.

Brian Costello: The Jets are getting after quarterbacks with renewed fervor.

Michael J. Fensom: Having learned from Ed Reed, Dawan Landry is the communicator-in-chief.

Mike Sielski: For Josh Bush, Landry is a blessing and a curse.

The Tennessean: RB Shonn Greene is at least another week away.

Grantland: Are we witnessing the rise of Jake Locker.

The Metro: The Titans are working in their own young quarterback.

Newsday: RB Chris Johnson is a tough test for the Jets run defense.

AP: WR Kenny Britt says that he needs to focus on catching the ball first.

Deseret News: A high school coach suspended his entire football team in a lesson about character. 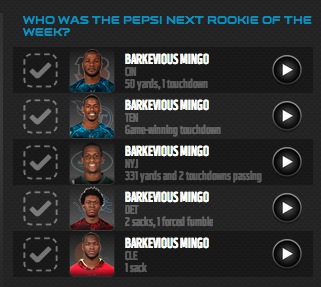 But maybe you can vote for the third Barkevious Mingo anyway.

Again, the competition is rigged: 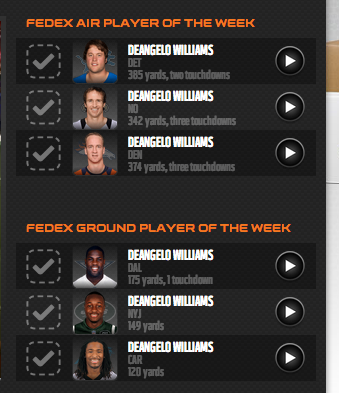 But vote for the NYJ DeAngelo Williams anyway.  Tsk, tsk, tsk.  They all look the same to you, don't they?

While we're at it, I'm in the mood for some of Santana's "Evil Ways": 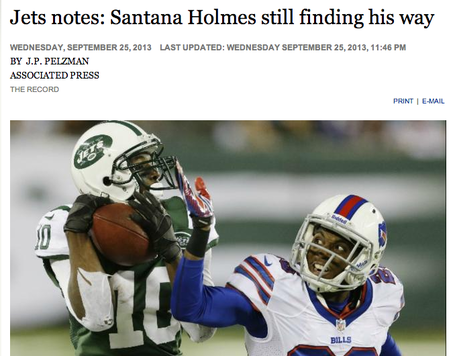 If Carlos Santana married Justin Rogers, he would be Carlos Rogers.

Anyways, here is a Nick Mangold photobomb to wrap it up: 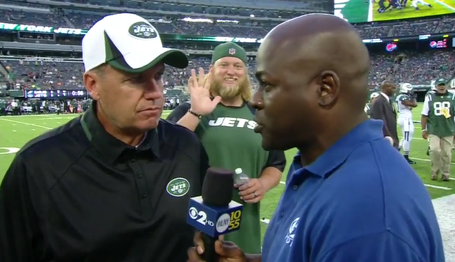 Have a great day, everyone!