The Jets beat the Bills via the air last week. Ironically most of the plays that were key in the victory were based on the same concept.

In this edition we will break down some of the key plays including all the major TD plays. First off let's take a look at Geno Smith's TD. From the tape, on all three views it looks like a designed run, that's executed perfectly. 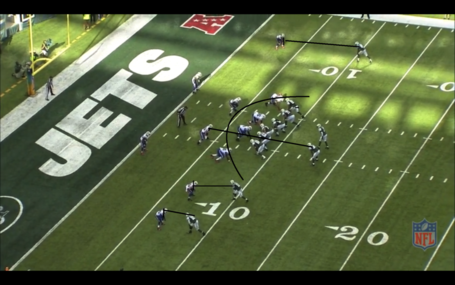 It looks like the Bills defense is in man to man across the board with the safeties doing something. Possibly a deep zone by them although I'm not really sure. The safeties really did a poor job diagnosing the play here to be honest. Had they done more, it probably could have been stopped. This is a perfect play call for the defense here as the Bills are running what look like outside stunts with man to man..

The Jets offensive line is in a middle zone blocking scheme where all they are trying to do is create a hole for Geno. It doesn't really matter where. It's up to Geno to find it and run through it. All that needs to be executed is the blocking for this to work. From the front, you can see right away where Geno is going to be looking for a hole. The scheme originally calls for Geno to run up the middle over the center as you can see from the blocking, but it doesn't quite work out that way. 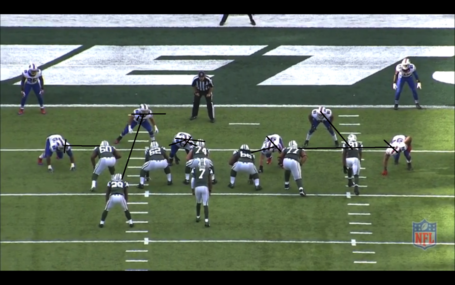 With the Bills in man, the coverage has to respect the routes deep, so that takes care of the secondary. This also allows Winslow to run right into the LB without him moving. The rest of the line is charged with just creating a hole somewhere for Geno. Unlike Shonn Greene, Geno finds the big hole. In the picture below check out how the Jets O line is forcing the guys outside and away from the middle. This is almost flawless blocking. 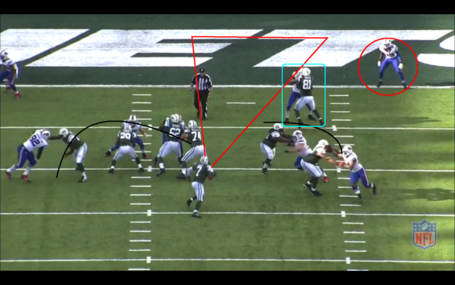 Winslow does a great job on the linebacker in the blue keeping him out of the play. Kudos all around to the blocking because that is what sprung this play. At this point Geno has the hole, just has to make his move in the triangle. The only man Geno has to beat is the safety on the right who is eyeing him. The safety on the left is too preoccupied with the routes to make much of an impact, which makes me wonder what scheme they were actually in. Needless to say, that was a pretty easy 3-4 yard gain with the blocking that turned into 6 with Geno's athleticism.

On the inverse this is where Geno needs to get a lot better quickly. The Jets run two guys deep with in routes underneath. The Bills are in a man to man with a safety over the top. Geno sees the matchup at the line and likes what he sees. I can't argue with him there either. Once again though, execution has killed him. 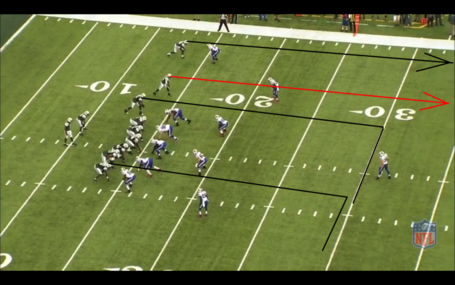 You can see that Leonhard is deep over the middle in a cover one. Everyone else seems to be in a man coverage too. Leonhard has to help the deep routes and patrol the center but he cannot keep up with Holmes running the route.  Additionally, Holmes does a great job beating the corner off the blocks, meaning he's got a real head of steam. You can see in the next picture just how much separation Holmes has. 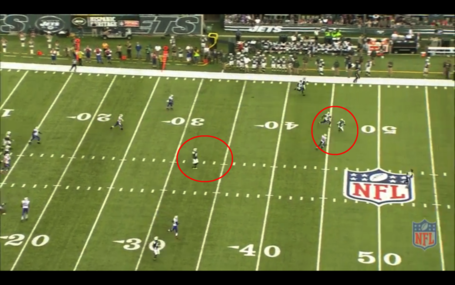 Look at the separation, that's almost a gimmie touchdown. A good pass and it's an easy six. Geno has to start making those kind of throws. I get that he's making great reads but that marks at least 2-3 easy passes that Geno has underthrown. What makes this pass so much worse is that he threw it so short that Leonhard who was beat by 5 yards actually made the interception.

Side note: Why did I circle the guy in the middle? Well I love the way he was watching the play. But to sum it up, it was a pretty bad throw by Geno and a good job by Holmes getting wide open.

The next play on our list is the opposite, a good play and read by Geno. It was a perfect pass to Hill who ran a deep fly route. This is all on the safety who did not take a good angle and double cover Hill. Hill beats the corner easily and ends up in the endzone while the safety ends up 20 yards behind the play. (I really thought the commentators did a great job talking about how bad the safety play was in this clip.) 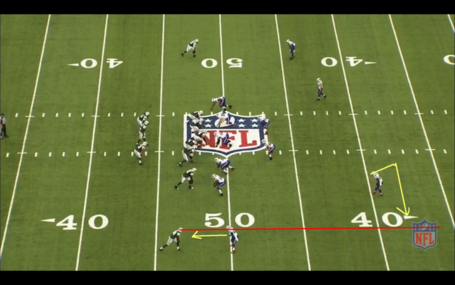 And now we switch gear and go to the defense. I'm breaking out a new thing here called You Blew It. It's as simple as it sounds. I highlight why a play was successful against the Jets and assign the blame. We'll see how long this lasts, but I'm going to enjoy this part.

Here we go. It's really a simple route concept. 4 men go deep with the TE running a wheel route that turns up the field. Really this is a perfect play design against the defense. Because everyone is on man on the outside it's up to the LB and safety to cover the TE. At first the TE looks like he's covered real well by Pace, but the second he turns upfield, problems start. Underneath the Jets run a 3 man rush with 2 guys playing what looks like a spy, both end up not rushing the QB or doing much of anything. One of them was Richardson a stud pass rusher, so I have no idea what this was trying to accomplish. 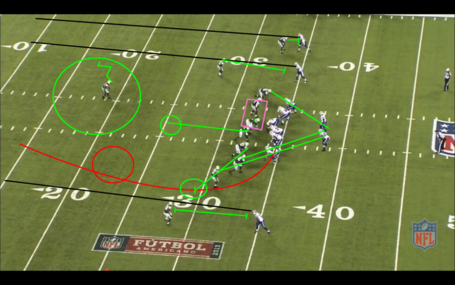 As for the route in Red, that's where the issue is. The Jets are playing an underneath zone with the safety taking any man deep. Here the safety keys on the two routes to the right side of the field but leaves the Pace to cover the TE. Pace actually does a great job at first, but let's him go by and falls into the zone. That's a problem because as you see in this next picture he assumes that the safety is going to be there while the safety is on the other side of the field expecting Pace to handle it. Needless to say it's a perfect example of blown zone coverage. 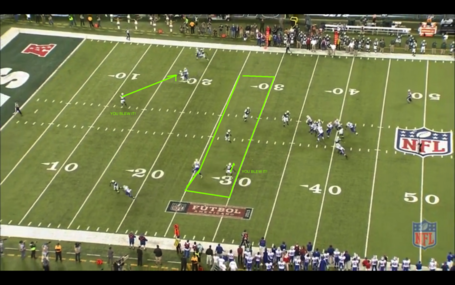 Here you can see the LB'ers zone for the Jets is at 10 yards deep keeping everything but Chandler in front of them. Meanwhile the safety (Landry) is deep but moving to the WR's. This leaves Chandler open at the 25 behind Calvin Pace in the zone. This is how you break down a zone using the TE's and needless to say this one went for six.

Honestly, after looking over the tape the blame probably is more on Landry than Pace. Landry has to know the LBer's are staying short. Then again, it's also a healthy dose of Pace letting him go deep without making sure he had help there. So because an argument can be made for either, the inaugural You Blew It is a tie.

In honor of our new little feature: Landry and Pace.... YOU BLEW IT.

As for the Holmes TD it's basically a good pass and even better play by Holmes. Straight man to man coverage was beaten by a solid pass, and Holmes somehow came up with it, shrugged off the guy and went for 6.. Here's the simple diagram showing the route and the fact the corner was off on an island. Basically that's the downside of man to man coverage, if one guy gets beat, it can be an easy score. 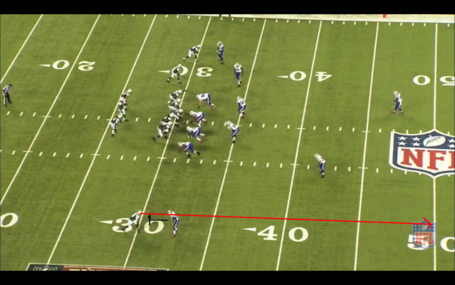 So that about does it for this version of GGN chalkboard. I'll try to have some plays to look out for against the Titans up by the game. In the meantime, ask any questions you may have about schemes and stuff you saw this week and I'll try to answer them.