In this edition I check out how Rex Ryan likes to use his safeties.

Under Rex Ryan the safety position has been a revolving door. Here's just the few names I can think of off the top of my head who have played safety for the Jets: Kerry Rhodes, Jim Leonhard, Brodney Pool, James Ihedigbo, Eric Smith, LaRon Landry, Dawan Landry, Yeremiah Bell, Josh Bush and Antonio Allen.

So what do a lot of these have in common? Usually one of the Jets safeties is a cover guy and the other is not known for being a good cover guy. Guys like Rhodes, Bell and Allen are probably in the first group. The second would be Leonhard, Digs, Pool, Smith, and the Landry's. Notice that the Jets have constantly had more of the big hitters and run stuffers than good cover guys? With the way the Jets use the safety, probably the best reason is they need a really good versatile player.

That brings us to this edition of the chalkboard. How does Rex like to use his safeties?

The SS and other LB's are the second level of support. They are charged with covering the short routes as well as plugging any runs that get past the lineman. Generally you want athletes in this role but with bigger size than a OLB. The Jets have these two guys in David Harris (if he can recover a lost step or two) and Landry*. They are also used for blitzing out of this package and can play man to man against the FB or TE depending on the individual play call.

*It works cause now Dawan is in this role, instead of LaRon.

Lastly the FS. This guy lines up anywhere between 25-35 yards behind the line of scrimmage. A center fielder of the defense, nothing can get past him. An Ed Reed type is perfect for the role. Generally speaking, this guy should be fast, quick to the ball and can lay a big hit. The reason he stands so far back is to see everything in front of him and be able to always be moving forward. This person can be used in man-schemes but is predominately a centerfielder tasked with keeping everything in front of him and always moving forward.

Here's the visual of the set up showing the 46 scheme. 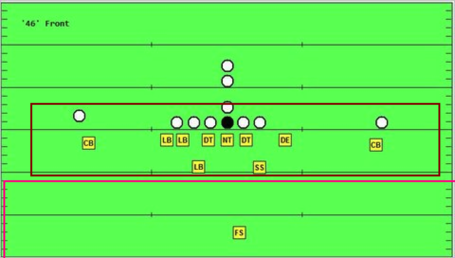 So again we see the big hitting role and the guy having to play center field in this package. But what about in a traditional 3-4 defense that Rex uses? What does the safety play look like in there?

Believe it or not, Rex loves the same type of play from his safeties in the 3-4 that he does in the 46. He loves to run one up as an extra linebacker/ play a man/ or blitz. This guy has to be a do it all type safety who has to be very versatile. Almost everything you can expect a safety to be able to do, he has to do and then some.

The other is almost always doing a deep zone or covering a man from deep.

The best way I know how to do this is to show you what I mean. So let's go to the game tape and see how Rex loves to use his safeties.

First off, he loves to use one as the deepest man. If he's not in man coverage, usually one of the safeties is in cover one, patrolling any deep routes and keeping the guy in front of him. Against the Pats we saw this on one of the first plays of the game. Take a look at where Landry is playing. He's playing almost 12 yards behind the line of scrimmage, but he's the only guy back there. He's literally the last man of defense playing a deep zone. 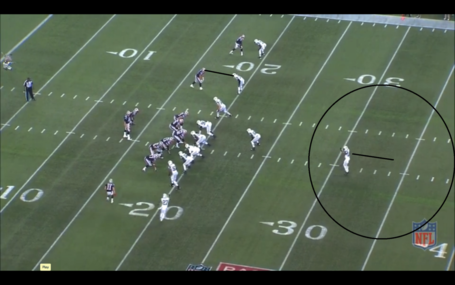 Landry is left deep playing any man that goes long in this example. Pretty simple assignment for him.

So what's the other safety, Allen, up to? As Rex loves to do against pass happy teams, he's playing a tight man coverage on the outside against the WR. But he always is doing something different. On any given play this safety is usually moving around the field, lining up everywhere from the LOS on the outside, to inside, to deep.

We can see how flexible this safety has to be on any number of plays:

Here Allen lines up close to the line of scrimmage faking a blitz. He ends up dropping into a short zone. Just think about how hard this scheme is on Allen against a short pass. He's going to have to somehow drop into coverage very fast after faking the blitz. 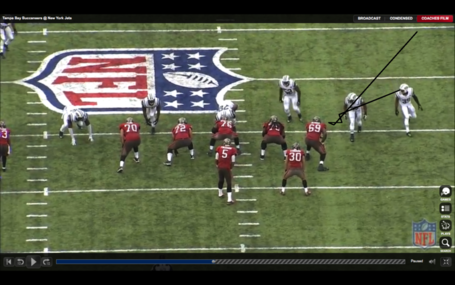 And the side view: 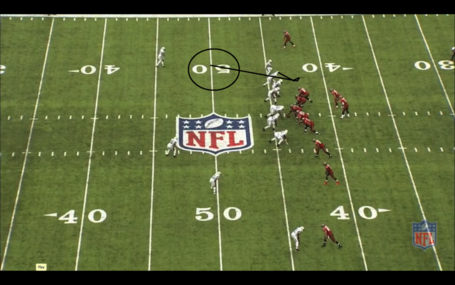 Allen in this example ends up having to play zone after faking a blitz. Once again Landry is the deep man right around the NFL logo, in a very simple scheme.

In another example: Allen this time completes the blitz. He starts off behind the line of scrimmage in a typical safety position. Before the ball is snapped he begins to move up and then blitzes off the right side. You can see how he moved before the play. 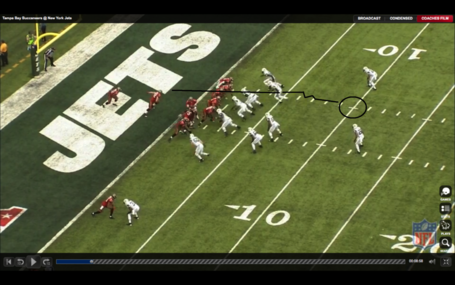 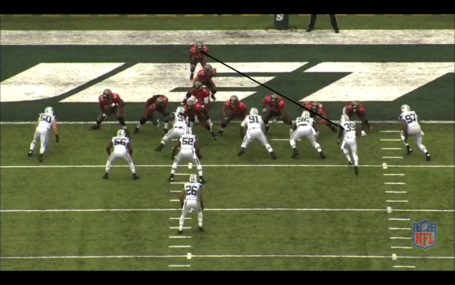 You can see how far into the LOS he is. He's literally almost a 4th lineman. And there's Landry dead center of the field playing deep. You see the contrast, where Landry has to play deep almost every play where Allen is the do it all guy.

In a different example: Here's an actual picture of Allen having to play deep. Despite this, he actually is playing man to man. What's interesting is this example is still Landry is playing deeper than everyone else, even behind the deeper play Allen. 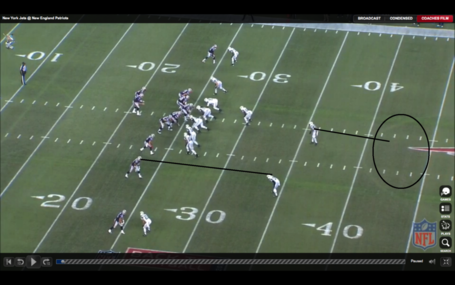 In this example Allen plays the man in deep coverage in off coverage. It's so interesting to me just how much he has to move around the field in every example. Watch the game on Sunday, and I'm sure you'll see how much he has to roam around.

Notice a theme here? One man always drops deep. (Sometimes Landry does play a man on a complex blitz.)

The other has to be the most versatile player in the 3-4. He has to be able to blitz, play man, fake a blitz, line up short, or even line up deep. I've seen one or two examples where he even has to be deep and run a blitz from there.

In short, the safety play is complex and one dimensional. One guy is the most versatile, the other has one job and it's probably the most important to prevent big play. I'm quite amazed at this, how different the safeties have to play despite both playing the safety spot.