In this edition, we look at the first two games and some key plays.

First off let's take a look at the interception by the Jets against the Bucs. The Jets are in a 3-4 defense with what looks like a standard blitz coming off the left side of the defense. Before the snap though, Isaiah Trufant comes from the corner and shows blitz. Here's the set up before the snap after Trufant starts to show the blitz. 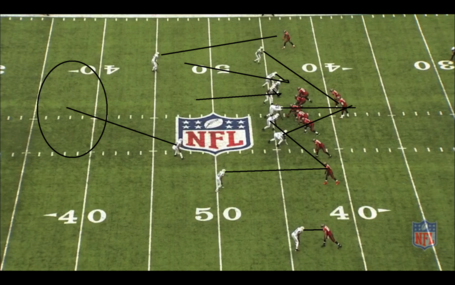 Dawan Landry drops into a deep cover one coverage but without a deep threat can hang out in the middle of the field. Check out the alignment and the blitz that comes. Despite having six men on the line of scrimmage, only four come, and three are in the front seven. Three guys: Harris and the two OLB's drop back into the zone after faking a blitz. Only Manning may be able to solve that riddle. It's quite a fun scheme. Let's check it out a second or two later. 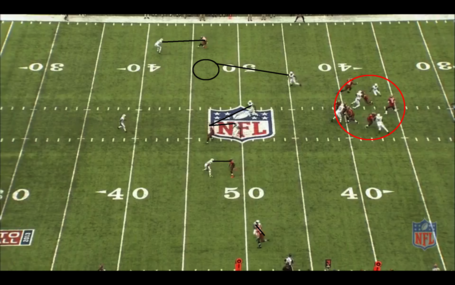 Four guys are rushing the QB, including an unblocked Trufant off the outside. Between Mo coming on the outside and Douzable and another DL on the inside, I don't think Freeman has anywhere to go. Check out the coverages too. There isn't a lot open besides maybe the guy Cro is covering. (However, the OLB on that side has the pass if it's short, and Cro can recover if the pass is late, slow or too far.) Landry is deep watching everything in front of him. Now it's decision time. Here's the moment of truth, where will Freeman go to? 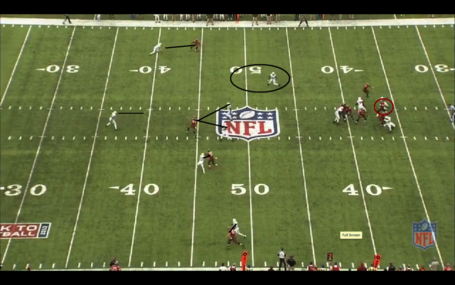 Freeman's about to get smacked by Trufant. The only pass that seems open is to Cro's man, however Freeman does his best Sanchez impression and throws it to the man who is triple covered. Needless to say, it was an easy pick for Landry who returned it for a good chunk of yards. Freeman badly overthrew the pass but still it probably should have never been thrown in the first place. Sometimes it is best to take a sack.

On the offensive side, here is the only TD pass. The Jets run a man in motion and form a tight trips on the left with two guys on the right. The right side WR's run a corner and in route concept. 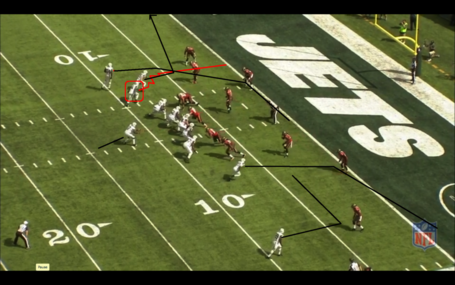 He then breaks deep finding a hole in the coverage. The coverage by the Bucs is good except for Winslow, who multiple people seem to forget can catch the pass.  He runs by both of them and he's wide open for 6 in the middle of the endzone.

As for the Pats game, let's take a look at the Geno interception in the red zone. This ends up being a good decision bad throw, so let's look at where things went wrong. It looks like a designed roll out that turns into busted play because 1) the O line breaks down on the right side and 2) because Hill and Winslow collided, knocking down Winslow. Here are the routes and coverages: 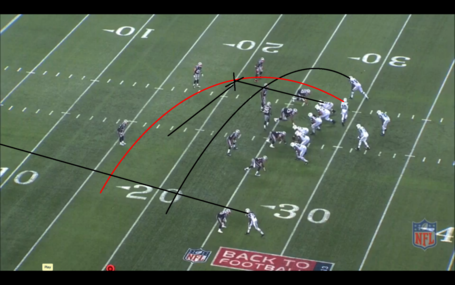 The Jets are running a levels concept which has all the WR's and TE running in routes from the right side. Holmes runs about a ten yard in, with Hill running the underneath route. He and Winslow trip each other at the X.

Now we can look at the coverages for the Pats. It looks like a cover two zone with man to man outside on the WR on the left. I tried to figure out who was covering whom on this play, but I couldn't tell whether it was a zone or man on the inside. This is my best guess at what was going on, which seems like a very simple cover two. 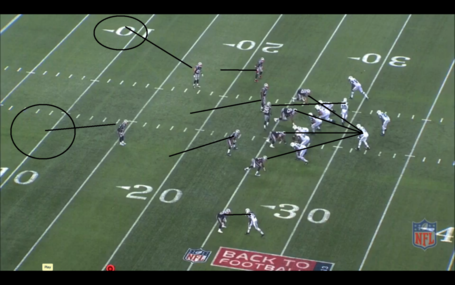 A few seconds later you can see what the coverages end up being like. Geno is the one on the 31 for those trying to figure out where he was on this play. 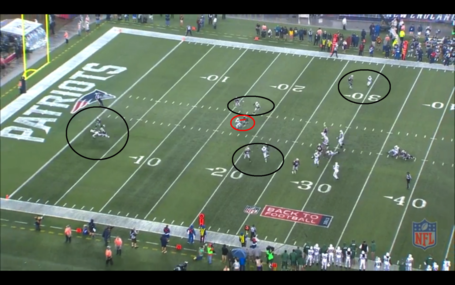 The Pats have the deep man Gates double covered. He is out of the play and the decoy. Hill running the short route on the 22 is covered very well. Holmes is gaining some separation, while Winslow is somewhat covered. However, that throw to Winslow would end up being against Geno Smith's body. Holmes is the only option it seems. Finally, here's exactly what Geno saw when he went to throw the ball. 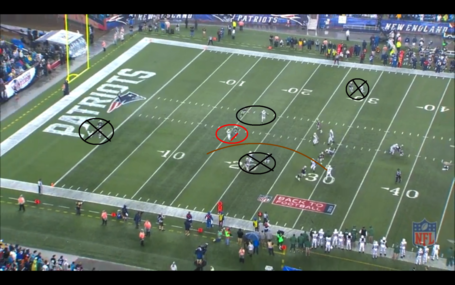 Holmes has separation and with a good throw has a good chance at the endzone with a good pass. I can't blame Geno on the decision, just his pass was way behind and cost him big time. Winslow is open, although the throw would be against his body and it would be a very tight window. Everyone else is covered or tripped up in the endzone. Geno made a good read, just didn't execute. Hopefully that's just rookie things, but the throw was pretty awful considering the amount of separation.

I hope you all enjoyed this look at the Jets offense and defense through the first two games. John B already covered the big play on defense that went for a TD, so there's no real defensive play against the Pats I thought was worthy of being pointed out. If there is any play you want me to cover, let me know and I'll do my best to show you what went on.