Before the game I called for the offensive line to make a marked improvement over their performance last week, and they delivered.

Now we can focus on the positives from last nights game. Regardless of whether the Jaguars are the weakest team in the NFL or not, a 37-13 victory is always going to produce a few positives. Personally I thought the play of the offensive line was one of them.

With Brian Winters still injured and unable to play, we started with the exact same line for the second week in a row. So we have D'Brickashaw Ferguson at LT, Stephen Peterman at LG, Nick Mangold at C, Willie Colon at RG and Austin Howard at RT.

Against the Lions the line looked very questionable, the QB's were hurried, the RB's had no space to run at all, and there were 3 penalties called on the starting unit for a total of 25 negative yards. You can't read too much into pre-season, however for our sanity they needed to perform.

On the first drive we didn't see a great deal of push up front, but when Sanchez dropped back to pass not once did he have any pressure in his face. He was given a clean pocket throughout the first series culminating in the strike to Jeff Cumberland. Here is a snapshot of the pocket on the touchdown throw: 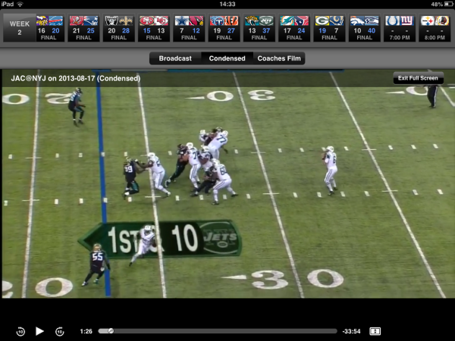 When you can give your quarterback this much space, it's going to end well. This was the look of the pocket for the entirety of that drive. Everyone doing their job, and in particular I was impressed with D'Brickashaw, someone who can be quite inconsistent, he was flat our dominant.

On the next series, the line performed even better. In image one you can see the first play after the return, again Sanchez is given a clean pocket and again he is able to find his open receiver, this time it is Kerley, this goes for an 8 yard gain, putting the Jets into a great situation on 2nd down. 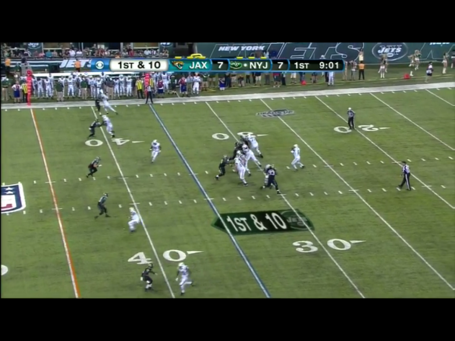 On the very next play, we see Powell rip of a long run of 37 yards. Now this is a thing of beauty, and for me there is nothing better in football than a perfectly executed running play. Each lineman did his job here to give Powell the lane to break off the long one: 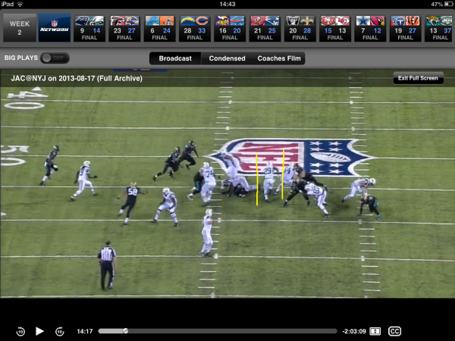 Willie Colon flat out dominates his man on the left hand-side of the yellow line, and Peterman who was pulling around from LG seals the right hand-side to give Powell all the space he needs to race through and break off a 37 yard run. This is perfectly designed and perfectly executed. I remember when Alan Faneca used to pull like that, and when done correctly, we used to rip off the yards. Now we all know Peterman is not Faneca, but he did one hell of a job last night.

This was how it was all night, lots of time for the QB's to find their targets and no penalties on the starting unit. Colon was dominant as you can see in the last picture, that's 3-4 seconds after the snap. It's pre-season, it's early but it's also encouraging. 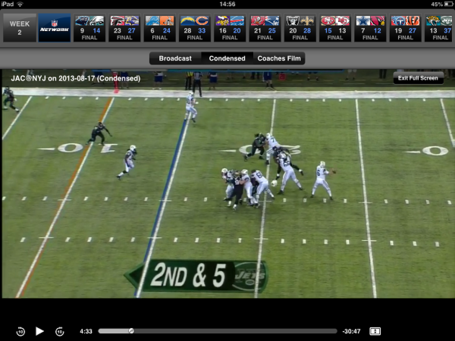