Will Rex Ryan Go Down With His Favourite Ship?

There are a lot of good aspects to come out of last nights game and we will get to them, but there is still the elephant in the room that makes us scratch our heads.

Share All sharing options for: Will Rex Ryan Go Down With His Favourite Ship?

I really want to get this article out of the way so we can go on to the positive aspects of last nights game and believe it or not, there were plenty. However Rex Ryan has again left us scratching our head in relation to his dedication to one player in particular, that man being Mark Sanchez.

One series into the game and we were looking good, Sanchez had connected with Cumberland for his second touchdown of the pre-season and everything was going according to plan. Then towards the end of the first half that all too familiar feeling returned. Sanchez pump faked his own man wide open in the end-zone and was downed at the one. There was then a series of plays that reminded us that no matter how many positive series we see, a dreadful one is right around the corner.

So first of all here is the play that most will be talking about: 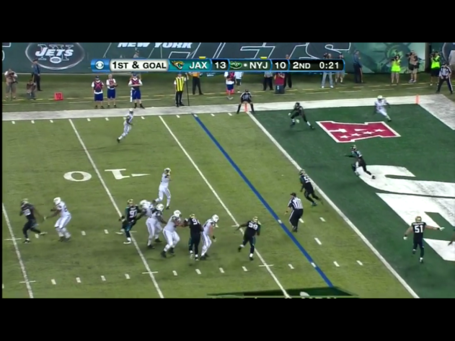 As you can see, Sanchez has a lot of time here, Gates has got in behind the defense, and nobody is paying him a single bit of attention. For an average to poor QB, this is still a very simple completion, no pressure, open receiver, about a 10 yard pass. Simple!

Unfortunately, Sanchez decides to completely ignore Gates in the end-zone despite Gates giving him a little wave: 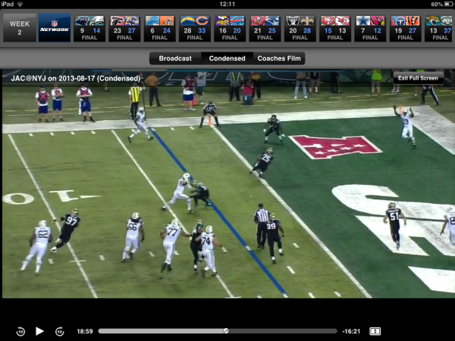 So that was bad enough, that's seven points that he left on the field. However he had another 4 attempts to put the ball in the endzone and his best chance perhaps came with Kerley, a pass that is on target with zip is likely going to be caught by Kerley for the touchdown. Unfortunately this is where the pass was located by Sanchez:

First picture shows the route by Kerley, just inside the end-zone with good position on the corner-back covering him: 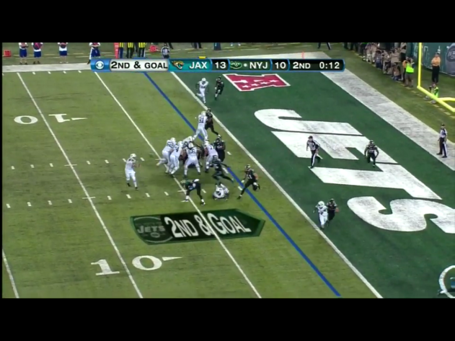 Now Sanchez is looking his way all day and he has his man, deliver it on the money and we are taking a touchdown and all the momentum into half-time. Unfortunately Sanchez delivers another poorly placed ball that sends Kerley sprawling to the floor unable to make the catch: 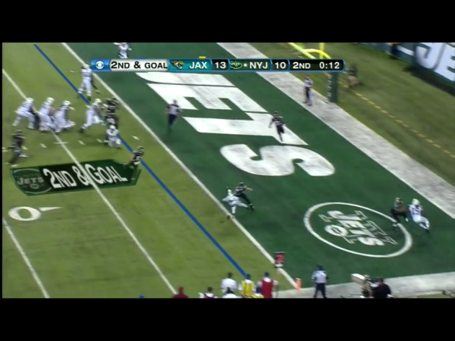 There were numerous other throws that were wild last night. He made some good throws as well, lets not forget that, but he did his receivers no favors. He was also facing a very very poor Jacksonville defense who I fully expect to be among the leagues worst when it comes to passing defense.

However my gripe is not with Sanchez, believe it or not. He is a poor QB, we all knew that coming into this game, in fact we knew that a long time ago. His mentality looks weak, he has problems on the simplest of throws, he still doubts himself to the point that it is detrimental to the team and he still doesn't learn from his own mistakes, regardless of how many times it happens.

My gripe is with Rex Ryan, a man who said that he missed Sanchez's pick-6 last week. A man who says the turnover was on the team and not just on Sanchez, despite Sanchez making the decision to throw it to a man double covered, he also didn't spot the ball very well. A man who takes full responsibility for Mark Sanchez's time management issue at the end of the first half. However this is also the man who called out Geno Smith for a brutal practise, a man who called our Dee Milliner last night for a poor performance, and a man who called out Quinton Coples for a poor effort in the weight room earlier this summer.

So the question has to be asked, why does Mark Sanchez get special treatment from Rex Ryan. Mark's Pick-6 was brutal, so was his red-zone interception last night, and so was his management of the clock at the end of the first half. His performance down the field with some poorly thrown passes in the 2 minute offense wasn't much better, remember that drive stalled with a 3-and-out and it was only the muffed punt that put the Jets in position to score.

For me there is little doubt that Mark Sanchez starts week one, not because he is the better QB, or because the Jets have grand development plans to bring Geno on slowly, but because Rex makes the decision. He's tied his mast to Sanchez, and Sanchez is the sail with a hole in it not taking the team anywhere. Sooner or later the ship will go down with Sanchez at the helm and by the looks of things, Rex wants to go down with it.

If Sanchez's mentality is weak, coddling him will not toughen him up. If you are going to call out a rookie for a very bad practise session, you better call out your veteran when he performs like Sanchez did in that second quarter. Rex Ryan drafted Mark, it was his first real significant move as the HC of this football team. We all know that Rex Ryan is a stubborn man and will never want to admit he's wrong. However being the best sometimes means admitting to your own mistakes, and Sanchez was a mistake.

Perhaps Sanchez leaves the Jets, gets a job in Jacksonville or St Louis and thrives without the media attention. Good for him, I have nothing against the guy personally, I just don't want him leading this football team, because I don't think it's the right situation for him. He'll never regain his confidence in this market, there has been too much damage done for that to happen. Sanchez needs to move on, for the sake of the Jets and himself. Unfortunately we know that's not happening this off-season.

Rex Ryan needs to wake up and smell the old coffee beans, people are noticing his biased nature towards Mark Sanchez and people are not going to like it. At the end of the day, it's his head on the line. If he stays loyal to Mark Sanchez throughout this season, with the schedule we have, he's writing his own ticket out of town. You can forgive a few losses when you are breaking in a new QB, you can't forgive a few losses when you are starting a poor 5th year QB to the detriment of your promising rookie.