Rex Ryan Refuses To Blame Mark Sanchez For Being Terrible

Share All sharing options for: Rex Ryan Refuses To Blame Mark Sanchez For Being Terrible

Mark Sanchez botched the end of the first half against the Jacksonville Jaguars. He ignored a wide open Clyde Gates and tried to run the ball in himself, failing miserably. With six seconds left, Sanchez rolled out and kept the play alive, before throwing it away too late. When the New York Jets could have settled for a field goal, Sanchez, a fifth year veteran, botched the clock.

But, as Chris Lopresti pointed out:

Interesting that Rex has twice taken responsibility for play at end of 1st half. Not willing to criticize Sanchez. Many won't like that.

Lopresti is right. I don't like that. Sanchez's actions tonight made the Jets miss out on two touchdowns. The first was a terrible decision to a double-covered receiver that resulted in an interception, and the second was ignoring the wide open Gates, who was right in front of Sanchez. That's fourteen points that the team could have had, I know, it's the preseason, who cares if the team wins. But those two plays are still indicative of bigger problems with Sanchez. Remember this play, from last year? 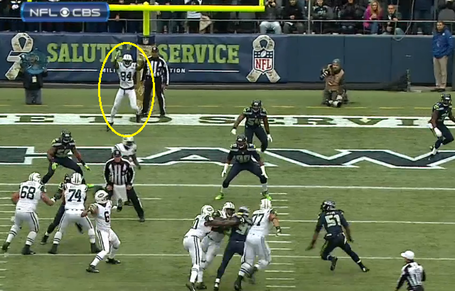 This isn't the first time Sanchez has made a blunder like this, and it won't be the last. After four full seasons, Sanchez is still the same player. For Ryan not to put fault on Sanchez for screwing up, not only with the touchdowns, but with the clock mismanagement too, is despicable. Especially in light of the fact that he has no problems with calling a rookie's actions, that of Geno Smith, as "brutal." Ryan has no problem blasting a rookie for his mistakes, but he won't do the same with a five year veteran? What's going on here?

Oh, and what was Sanchez's reaction?

Mark on the play at the end of the half: "That won't happen again." #nyj

Right. You're totally capable of learning from your mistakes.