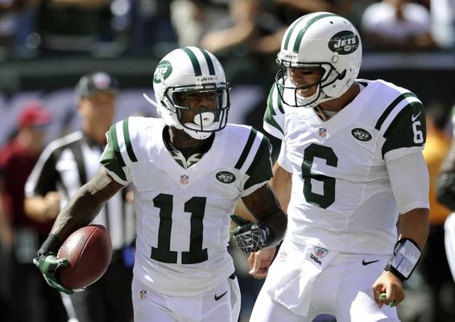 If any team in the NFL needs a breakout player on offense, it’s the Jets. New York had just one receiver top 400 yards last season, and only three players on their roster averaged two or more receptions per game, in an offense that ranked 30th overall. It was tough to watch at times, but fortunately for the Jets a bright spot emerged. Jeremy Kerley stood out from the rest of the Jets’ receivers in a major way and transformed himself from a situational special teams player to the best weapon the Jets had on offense.

Kerley is a bouncy slot-receiver that is more than capable of going over the middle to make plays. He showed fearlessness when catching the ball in traffic and breaking through tackles last season, and has the elusiveness to spring the ball down the field in an instant. Kerley managed to break a lot of big plays last year even though he had one of the NFL’s worst quarterbacks behind him and no other receivers around him to warrant defensive attention. His 14 receptions of 20+ yards ranked in the top 20 in the NFL, ahead of Wes Welker (13) and Victor Cruz (12), and just behind guys like AJ Green (16) and Julio Jones (17).

Big plays out of your slot receiver are a definite plus, but even more important to the position is consistency. Kerley dropped just three of his 96 targets last season, good for a drop percentage of only 3.13%, which puts him in the elite category in that regard. Kerley’s lack of drops is even more impressive when considering who’s throwing him the ball. Mark Sanchez was one of the NFL’s least accurate quarterbacks last season. He often drastically under or over threw passes to open receivers and even struggled with his accuracy on short and intermediate throws.

If Geno Smith gets the green light at some point this season, look for Kerley to become his security blanket. While at West Virginia, Geno Smith excelled with his short accuracy. In fact, most of his completions came on short screens, shovel passes and pitches to receivers Stedman Bailey and Tavon Austin. Kerley might not have the athletic talent that Austin does, but he has a similar enough skill-set so that he and Smith will feel comfortable together right away.

The Jets have brought in famed West Coast Offense operator, Marty Mornhinweg, to help remedy the team’s quarterback play. While in Philadelphia, Mornhinweg was able to make the best out of quarterbacks who were around as talented as the current crop of Jets’ quarterbacks. Mornhinweg’s offense ran efficiently with a 36-year-old Jeff Garcia, mediocre talents like Kevin Kolb, and middling backups such as Koy Detmer and A.J. Feeley.

Mornhinweg likes to implement similar concepts to what Geno Smith was running in college. He will feel right at home in a short-pass oriented system, which is great news for Kerley. Even if Mark Sanchez remains the Jets’ starter, it’s difficult to imagine him regressing more than he already has, especially under a noted quarterback guru in Marty Mornhinweg. Any improvements in Sanchez’s game will help Kerley improve upon his 56 reception, 827-yard stat line from last season.

Kerley doesn’t have the physical tools necessary to be a top-flight playmaker in the NFL, but his toughness in traffic, sure-hands and route running ability should make him a reliable slot-receiver with nice upside in the right system. In 2013, Kerley should again be the Jets’ best player on offense. An ugly job to be sure, but someone’s got to do it.