Let's look at one play to serve as an example. This is from the third quarter of November's Jets-Seahawks game. This is the first Jets offensive play of the second half. As we will soon see, the Seahawks are in a cover one on this play. That means their deep safety (circled in red) is responsible to help the cornerbacks deep over the entire field. Essentially, anywhere beyond the blue line, his job is to provide a second man in coverage to help his cornerbacks. 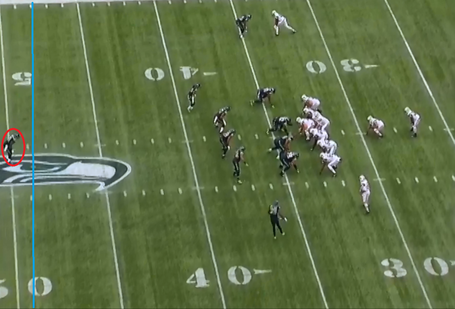 As it turns out, the Jets are in a very good play call. They have Stephen Hill going deep at the top of the picture and Dustin Keller running a post to the middle of the field at the bottom of the picture. Seattle only has one man deep to help the corners with two receivers going deep. Seattle's coverage is funneling Keller inside to the safety.

The protection is very good. Mark Sanchez has a clean pocket so he has time to let this thing develop. This play has touchdown written all over it if he can get the safety to vacate his area. He can do this with his eyes. If he stares at Hill (blue line), he can bait the safety to provide help to the cornerback covering Hill (yellow line), which will open up the area where Keller is running. Keller will be running to the open spot in the field, and there will be nobody between him and a long touchdown. Sanchez just has to throw on the black line. 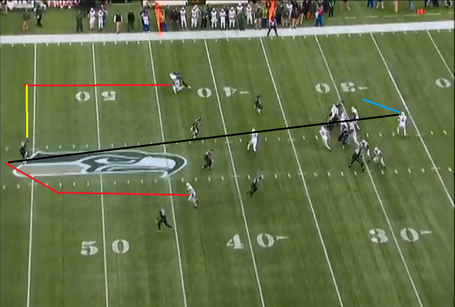 Sanchez does not see this. Even though he has a clean pocket, he doesn't recognize the coverage or that he is in the perfect play call. He checks it down to Lex Hilliard for a nine yard gain. 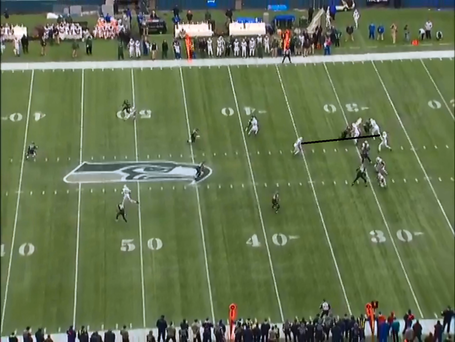 This is a perfect example of how stats can sometimes be misleading. On the box score, it looks great. It is a nine yard pass play. In reality, this was poor quarterbacking. A nine yard gain is good in a vacuum but is really bad when the alternative is a 67 yard touchdown. Instead of potentially having six points on the board, the Jets had over half the field to drive. This doesn't even factor in the way a long touchdown could have swung the momentum of the game and the confidence of the team. This was first down so it was a great time to take a shot. Even if it failed, the Jets still would have had two additional downs to move the ball.

Plays like these are the difference between good and bad quarterbacks. Sure, the quarterback hit an open receiver for an easy completion, but anybody can do that. Being a quarterback in the NFL isn't about hitting easy passes to wide open receivers. Even if you have great receivers, there are rarely wide open throwing lanes. It is also about recognizing how the offensive play meshes with the defensive play, identifying the best option, and being able to perform all tasks, obvious and subtle to put teammates in a position to make plays.

Unfortunately, this is not a case of cherry picking a play. Beyond the obvious issues with turnovers and accuracy, Sanchez's failure to recognize and execute was in many ways the story of 2012 for the Jets. You cannot blame the coaching for this play. The Jets were in a good call. You cannot blame the receivers. They did what they had to do. The quarterback had things in front of him and could not properly execute. These missed opportunities were a staple of the offensive struggles. This was certainly a case where a bad quarterback takes a nine yard dumpoff, while a good quarterback turns this play into something much more.

How is a quarterback supposed to perform without receivers who get open consistently? He gets them open. That's how. If the receivers aren't getting open, part of the reason is usually the quarterback is not doing his job.