We take a look at the Jets new QB and #39 selection overall.

Share All sharing options for: Geno Smith - A Biography

Most people considered Geno Smith to be a top 10 selection and the best Quarterback in the draft. The Jets considered taking Geno with the 13th overall selection; however it wasn’t needed as he fell to their selection at #39. Representing excellent value at a position of need, the Jets simply had to pull the trigger. Geno looks set to compete with Mark Sanchez and David Garrard for the starting quarterback position in year one. There is a lot to like about Geno and below is just a summary of why we can all be excited about our new QB. 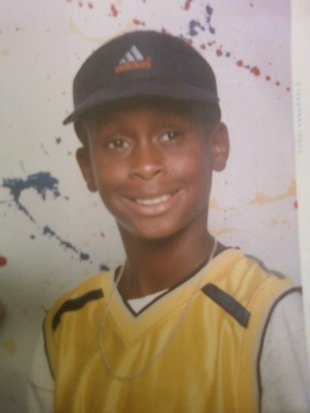 "His visions of things have always been beyond his years," -Tracey Sellers (Mother)

Born in Miami, Florida, Geno would go on to play his football at Miramar High School. Growing up Geno was always special. After taking an intelligence test early in his life, he was labelled 'Gifted'. So gifted that his mother was offered the option of skipping him a grade, she declined. He was entered into a gifted program emphasizing creative arts. He was a good chess player early and took up drawing as a hobby, the thing about Geno, he always was and always will be a perfectionist. Some say that is a bad thing when it comes to football, I think it's a great thing.

In his junior season, Geno threw for 2,200 yards 25 touchdowns and just three interceptions. Following this impressive performance, he was invited to the Elite 11 quarterback camp which is held annually in Aliso Viejo, California. During his senior season, Geno led his team to an 8-2 record completing 205 of his 338 passes for 3,089 yards and 30 touchdowns. He also rushed for 300 yards on the season. He led his team to the state 6A semi-finals. On a personal level he was named All-State First Team in Florida class 6A as well as being named a Parade All-American. He was named the Sun Sentinel Florida class 6A player of the year. He also finished second in the voting for Mr Florida and excelled in the classroom with a 2.8 core GPA and 1390 SAT score 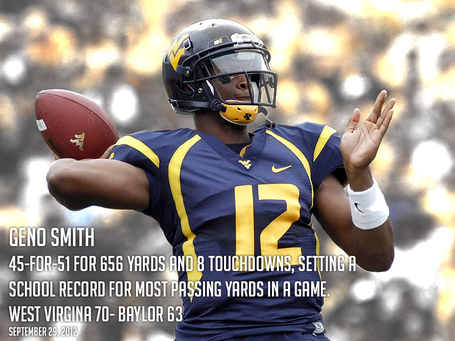 Smith was a highly regarded prospect but not the elite can’t miss prospect. Considered a 4* star recruit by both rivals.com and scout.com, and graded at 81 by ESPN recruiting, Geno’s positives were listed with release, pocket awareness and arm strength among the positives, the main negative? Ball handling. Geno was not short on options, he received offers from West Virginia, Alabama, LSU, Michigan, Clemson, South Florida and Boston College. Although only rated as the 8th best QB by ESPN that season, he headlined the recruiting class that also included Stedman Bailey and Tavon Austin, Bailey a player he had played high school football with.

"I could chew him out and bark at him, and some kids they would go in a shell. He never did, just stayed up, firm and high." -Damon Cogdell (HS Football Coach)

Although Geno would act as the backup quarterback for the Mountaineers in his freshman season, he would see action in 5 contests, completing 32-49 passes for 309 yards and a completion % of 65.3%, while tossing once touchdown and one interception.

2010 would see Geno start for the first time, where he saw action in all 13 contests. He completed 241 of 372 pass attempts for 2763 yards and a completion percentage of 64.8% while throwing 24 touchdowns and just 7 interceptions. By the end of the season, Geno’s star was growing, as he was named to the All-Big East First Team by ESPN, Rivals and Phil Steele, and he made the All-Big East second team by the coaches selection. He was the No.1 QB in the Big East in pass efficiency and was responsible for 148 points scored that season.

After his impressive 2010 season, there was a lot of pressure on Geno heading into the 2011 campaign. He took on a bigger role increasing his passing attempts by over 150 but also increasing all the important stats, yards, completion percentage, touchdowns and not increasing his interceptions. Geno completed 346 passes in 526 attempts for 4385 yards which is a completion percentage of 65.8%. He also threw 31 touchdowns to just the 7 interceptions. He was named the 2012 Discover Orange Bowl MVP after his West Virginia team decimated the Clemson Tigers winning 70-33, where he threw for over 400 yards and 6 touchdowns as well as rushing for another. The accolades rained down on Geno as he took home the All-Big East First Team ESPN, Phil Steele and coaches selection. He set or tied 21 West Virginia single game, season or career records, he set five Orange bowl records and four West Virginia bowl records.

Many thought that Geno would elect for the 2012 NFL draft, however he decided to stay in school for his senior season. After such an impressive junior campaign, many didn’t believe he could go one better. Well Geno accepted the challenge. He finished the season completing 369 of his 518 pass attempts for a phenomenal 71.8% completion percentage. He also threw 42 touchdowns to just the 6 interceptions. A lot of Geno’s passes were short to intermediate and a lot were behind the line of scrimmage. But just consider that Geno Smith put the ball in the air 518 times during the campaign and only 6 passes were intercepted. I watched a lot of West Virginia this year and it’s not like he was getting lucky, he is just pinpoint on passes up to 15-20 yards. It’s passes over that mark where he starts to get a little inaccurate. However it was only fitting that his final regular season performance ended with 24 passes thrown and 23 passes completion for 407 yards. Statistically, what Geno Smith did at West Virginia is incredible, and it can’t be undermined.

"On the field, he’s visualizing, It’s like a puzzle, his masterpiece." -Tracey Sellers (Mothers) 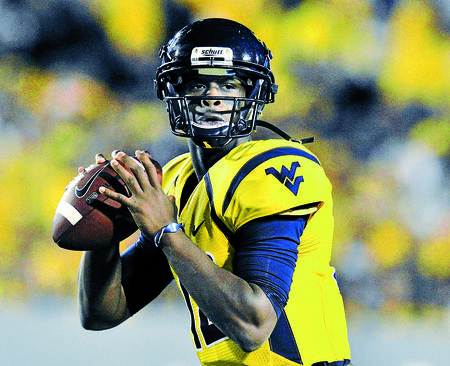 As we did with Milliner and Richardson, we’ll do a quick mini scouting profile just to go over his game:

+ Incredibly accurate on passes up to 20 yards.

+ Mobility to extend plays and pick up much needed yards.

+ Excellent decision maker who does not throw into traffic.

+ Not a one read guy, checks down to 2nd and 3rd reads effectively

~ Accuracy on the deep ball is questionable.

~Mental toughness, gets very disheartened when down.

~ Took 90%+ of his snaps in college from shotgun or pistol formation.

There is no way to sugercoat it, I absolutely love Geno Smith. Over the first five games in 2012 he completed 81.4% of his passes. That kind of accuracy regardless of the routes or system is impressive. I like his decision making and he makes excellent reads on the defence which is why he doesn’t have big interception numbers. He does have flaws to his game, but to get him at pick #39 is incredible value and this could turn out to be the biggest steal of the draft. There have been some concerns about his ability to play in cold weather but that is really based on a small sample size so I’m willing to give him the benefit of the doubt. However his ability to read a defence, his pocket awareness, his mobility and his accuracy make me believe he is going to be a very good quarterback for a long time. Let’s hope so anyway.