The Case Against Cordarrelle Patterson

Let's consider the risk versus reward of the wide receiver out of Tennessee in terms of his production and other receivers in the draft.

Share All sharing options for: The Case Against Cordarrelle Patterson

Many here on Gang Green Nation have commented how happy they would be if the New York Jets selected Cordarrelle Patterson, the wide receiver from the University of Tennessee, with the ninth overall selection in the 2013 NFL Draft. Patterson is, by any definition of the phrase, a playmaker. He is a stud after the catch and electric to watch. But I'm not so convinced he's the best receiver in the draft.

Furthermore, my argument is based on the theory that the Jets should not take a massive risk at number nine when there are safer alternatives available that could produce an equal reward in terms of value.

This first graphic shows the market share of receiving yards by Patterson and three NFL players, using their collegiate stats. The purpose of this is to put their statistics in context, rather than pure numbers. I use market share of the total yards that were accrued because I want to know what their production actually meant to for their team. Looking at the chart, you can see that Patterson put up a paltry 20%, which is extremely compared to these successful receivers. 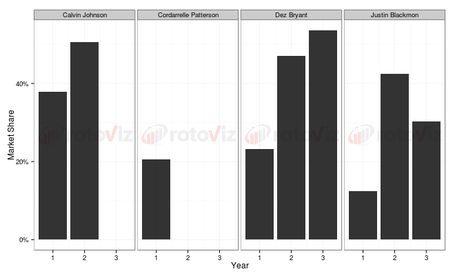 This second graphic shows the market share of touchdowns by the four receivers. Again, Patterson is extremely low in comparison. 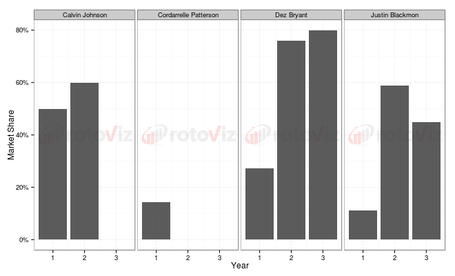 You know who Patterson is, statistically, similar to? Darrius Heyward-Bey. Before you go ahead and shoot me, consider this:

There are plenty of other wide receivers that have had more production and are safer picks for the Jets, either with their first, second, or third round picks. Many do not have the same high reward possibility as Patterson, but they are definitely safer picks. Here are a few of them: 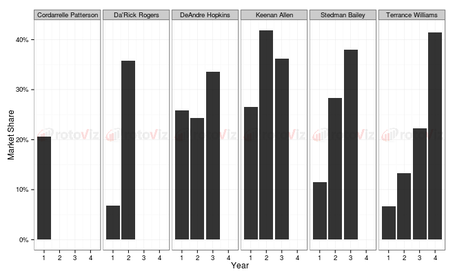 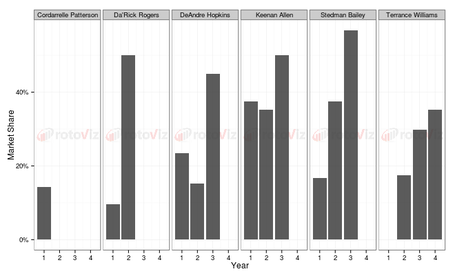 The purpose of this is article is to ask you to think contextually about what Patterson actually meant to his team, and to consider the risk versus reward, in terms of selecting Patterson at #9 versus another receiver later on. That receiver may not have as high a ceiling, but the risk is considerably less as well. Let me make myself clear. I am not saying unilaterally that the Jets should not draft Patterson. I am saying that there are more things to consider than the number of "wow" plays in his highlight reel.