The cover zero defense is another word for a pure man-to-man defense. The idea of cover 0 is to play man to man against anyone in the pattern and bring any extra guys to blitz. Other schemes are more about trying to enhance the man coverage with some zone. In this chalkboard, we break down the Jets man to man schemes and show you some schemes you see on Sunday.

No one person can say they came up with or ran a man to man defense. But the defense has been part of every teams arsenal of weapons to use.

The idea of the cover 0 is to bring pressure. If you look back at our talk on the 46 bear defense, I mentioned the Jets play a lot of man schemes out of it, mostly because of the blitz packages they can run. Other schemes are based off it it, but put an emphasis on playing more of a conservative defense than an aggressive one. The idea of that is to have 6-8 people in pass protection and the rest rushing the QB.

But both need the same kind of players to work it.

D line: you must have good pass rushers or you will often have to bring more than 6 guys to create an effective rush. Think back to 2008 where we played a mostly drop back defense under Mangini. Lots of passes were completed because there was no rush. In this case a 3 or 4 man front can be used so what you really need is two guys who are good to great at pass rush on the line to give you some pressure. (Maybe Coples ends up filling the void?)

Linebackers: This is where it depends on the scheme. Pass rushers on the outside give you more pressure but hurt you if they have to cover a TE or FB out of the backfield. Same goes with MLB, although they might have to cover the middle zone too. Ideally you need a good mix of pass rushing specialists, coverage specialists and maybe one that can play man and zone) This is probably the most critical position to run this scheme besides the next group.

Secondary: Both safeties, cornerbacks, and nickel and dime package people must be able to cover man to man well. The Jets have 3 guys who do good enough that they can get away with playing more man schemes. The corners must be able to keep up with the WR while the safeties much be very diversified. They must be able to handle not only slot WR, but TE's, RB and FB sometimes. Realistically the safety position also must be able to blitz.

In most man schemes arguably the biggest things you need in today's game would be a good cover safety to cover TE and slot receivers which are becoming more important in offenses especially against the pats. (See Welker, Gronk, Hernandez. You'd also need some good if not great linebackers especially OLB's to be able to run this effectively. And then you need shutdown corners. The Jets have 1 out of the 3 if they don't resign any safeties.

So let's dig deeper and get into the nuts and bolts of the Man to Man Schemes.

So let's look at 2 or 3 predominate schemes used today based of man to man schemes. They are the cover 1, the cover 0 and the Lurk coverage as well as more basic cover 2 man (won't be included)

The cover 1 is probably one of the most run defense by my count in the Jets playbook. They run it most of the time they bring some but not a lot of pressure. Generally more than 3 but less than 6. Let's take a look from the Miami game.

The Jets line up with what looks to be a 3 man front with an extra CB (wilson at the top of the screen). Cro is on the inside but is covering the TE. Bart Scott looks like he is man to man against the running back, but once the running back starts his block (the blue thing I drew), he cuts to the QB. (No need to cover a guy whose not running a route) Other than Landry every man is either rushing or has a man. 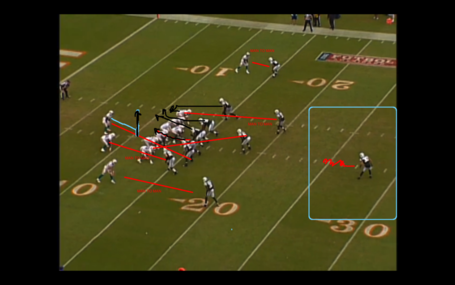 So let's see how this plays out.

Everyone keeps there man held up for the most part. Fasano the TE doesn't move off the line but Cro stays in coverage waiting on him in case of a delay route. #50 covers up the FB coming out the backfield while the corners lock down the two outside guys. Harris jumps the middle route and knocks the guy nearly down. Bart joins the rush with 4 others on the right side putting serious pressure on Tannehill. The only man truly open would be the running back who seemed to be blocking the edge and not running the route. Landry gets to watch the whole thing as he awaits any deep routes, none of which come. 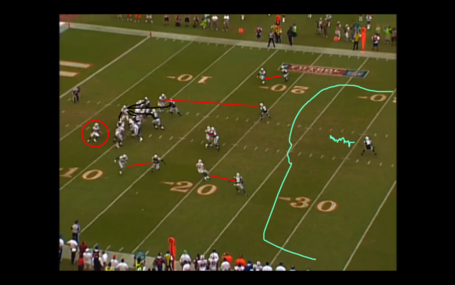 End result: near sack, almost a intentional grounding. The beauty of the cover one is that you can hide the coverage which the Jets did, and attack. However, if one man gets free, there is only one man deep as the last hope.

I'll admit, this play in particular had me really trying to figure out what the Jets were running, but I think it's either a Cover 3 man to man or a very interesting Man-to Man scheme with a double team on 17. Seems right too the more I think about it.

The Jets are bringing 5. Both corners are in lock down mode. The two linebackers each have man, one grabs the RB, the other goes after the TE. I'll show you why things get a bit interesting. 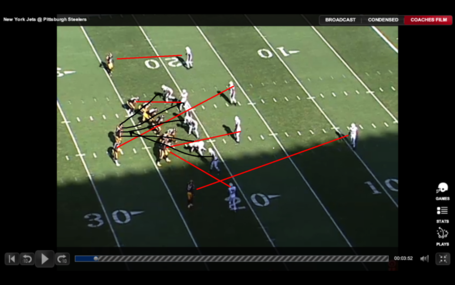 The players in question is the deep man and bottom corner.

What it looks like is the Safety jumps on the outside man coming across the field and then Cro helps double team a guy on the corner, as if he checked off the guy as he ran across the field. If 17 had run a straight seem I have a feeling Cro would have given him the inside release and then played the comeback route. The circled guy with the line is Landry while the one on the double team is Cro. Landry ran about 25 yards to get to the guy which leads me to believe that he was man to man. And thus a true cover 0 with a double team. 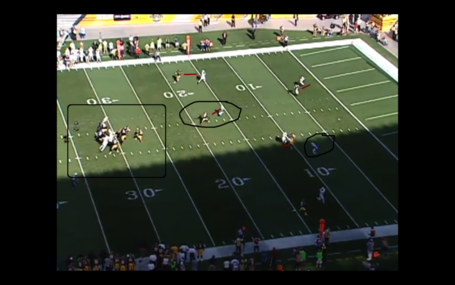 Anyway, as you can see everyone has a man. There's no one open and with a 5 man rush Ben gets sacked and the Jets get a key stop on the third. The strength of the man to man is by far the different ways you can pressure and bring the heat. Just take a look at the Jets front and you tell me who will be coming and going before the snap. It's nearly impossible, which is why the Cover 0 tends to be really good. (FYI that's almost 8 in the box) 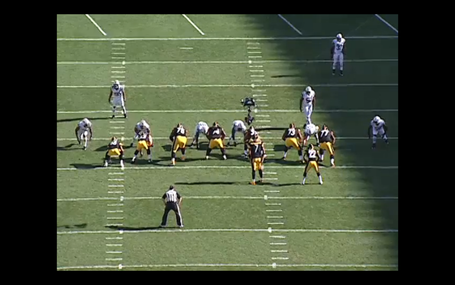 So let's talk about the lurk coverage. And for that, well, the best play to show it happens to be against us. And it's the Pats who ran it. On Thanksgiving. Not the Butt-fumble either. So I don't mind if you skip this because it does suck to see it happen.

Simple man across the board with a 4 man rush. But a wrinkle to the cover one. The safety drops deep but the other one cuts across the middle. Guess why? Because it takes the short pass away. Again a man scheme that is more about not blitzing and hoping your defense makes plays. 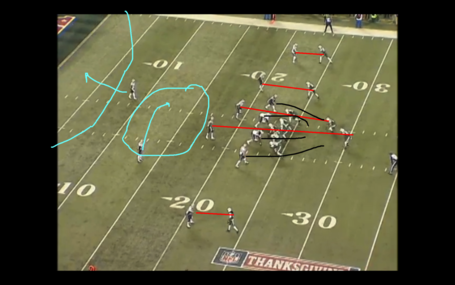 Front view because it shows how deceiving this scheme does look. 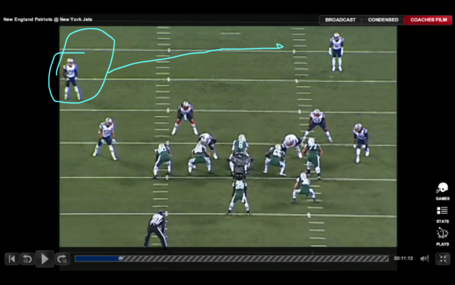 How does this end? Poorly. The in route that gets run gets picked. The pats drive the field, and then the famous sequence from hell.

The cover zero, one and one lurk all have the same scheme of predominately man to man coverage. The differences are small, however the cover 0 tends to be a more pressure front while the Lurk and cover one tend to try to allow the D line to get a push without much extra help. The lurk is hidden and is a dangerous weapon if not read right:

Who came up with it: No idea. But it's a big time used scheme

Strengths: Can be hidden well, can blitz and bring pressure or let the D line go for the sack and hope the safeties/LB/CB make a play

Weaknesses: with any man-to-man it is dependent on players. If they aren't good at man schemes, your doomed. Requires a good pass rush too.

Uses: to bring pressure, to try to force a pass early. The lurk is used to stop short passes and runs

Beaten by: better recievers than secondary, an inept pass rush

Useless trivia to impress BDTSL your date with: The cover 0 and 1 refer to the men that are deep in zone. The lurk is the term used to describe the safety taking away the under neath routes.

There's your look at the cover 0, 1, and lurk defense.