This is a different kind of post for the GGN chalkboard. Sure I'll discuss and break down plays, but this time it's one particular play/scheme that got my interest.

Share All sharing options for: GGN Chalkboard Special Edition: a Century of "Innovation"

Announcers on NFL Sunday's like to tell you how groundbreaking and smart certain coaches and schemes are. We heard it about the Pats defense (remember when they were actually good?), the 46 defense of the Bears and the zone blitz. However, it seems the offenses that try something "new" and it works get most of the glory for bringing us new concepts. Imagine though if the scheme isn't new, but simply an old idea adopted for today's game.. which is where this post will be going.

Quick question for you what do Jim Thorpe, Frank Gore, and Ronnie Brown have in common?

Answer: They all have been part of an offense that was "new" to the NFL and caught defenses by surprise.

Imagine I told you that the new concept in the NFL, the "zone read" was actually thought up in the 1900's. Not the century, but the decade. And in between those two schemes, 5 years ago, the wildcat was brought to us as the newest NFL fad. The two newest on the list are based on the scheme that was created before the NFL even started.

So for this special edition of GGN chalkboard we will be looking at the zone read/wildcat/singlewing.

So what do you need to run this play?

You need three things in today's football but only two in past decades.

1) You need a good, athletic offensive line. This play set is always run out of a zone, or a zone trap (more on that in a few). You must have an offensive line that excels at zone blocking, including TE and WR who will be setting the outside.

2) You need two athletes to run it including a good RB. In past decades, Jim Thorpe was used in this role because of his athleticism. Flash forward to today Russell Wilson has Lynch, Kaepernick has Frank Gore, and Tebow had Joe Mcknight an athlete Shonn Greene. Which brings me to the next point.

3) In today's game you need a guy who can also throw. The great wildcat era ended because defenses could load the box without much of a threat of a throw. Tebow was supposed to pose that but never really utililized his arm for this play. In fact, the most memorable throw was arguably the one that led to Epps getting his knee torn up and went for an INT. This is starting to become more of the norm of the NFL, an adaptation to the old play for the new style of offense.

So let's break it down:

Let's start off with formations:

The true single wing has an unbalanced line 4 guys to the right of center and two to the left. (blue boxes) 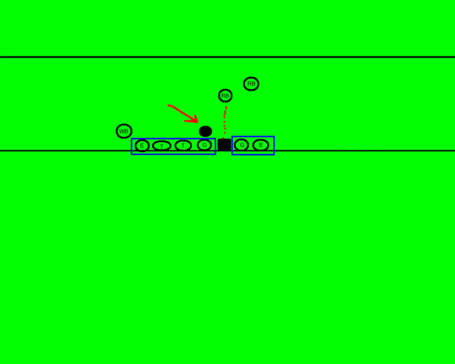 The wing is on the same side as the unbalanced line (WB). Both RB's are lined up in shotgun, one is behind center the other in an offset formation. Take a look at the "QB" though. He's actually almost a FB blocker. (I have seen teams move the WB over the tackle and move the wing just outside the end in a tighter formation very similar.)

The double wing has a little different formation, primarily moving the QB to a wingback on the opposite side. (W/Q) in the picture below) 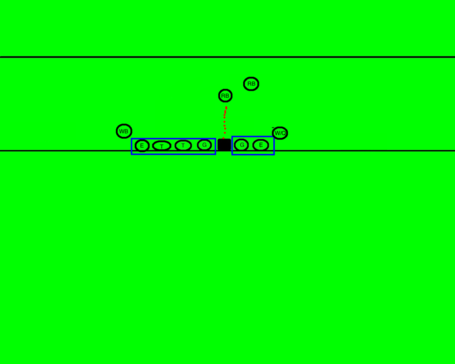 This formation tends to allow more opportunities for reverses and deception but is less of a straight power offense.

The wildcat can have the QB play either WR or off the field in today's offense and has more of a spread look to it then the past single wing.

So here's one version in 2009 of the wildcat. Note the similarities between the wildcat and single wing. One there is a fullback QB over the guard tackle gap (Red line), Brad Smith the athlete is taking a direct snap, with Shonn Greene lining up behind the QB. Also the WR'ers are spread rather than in tight like the single wing. 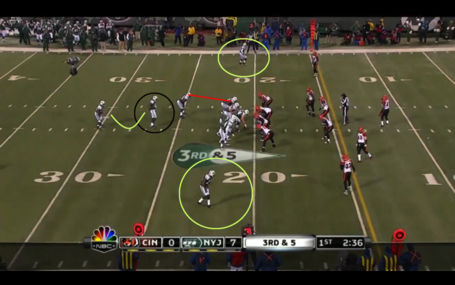 Once again an adaptation to the new game. Instead of a tight formation, the Jets used the same concept and almost the same formation to work a play for 10 yards. Some call it innovation, I call it using a good idea and crafting it into your own.

With that said... take a look at the 49'ers zone read formation. Seems familiar doesn't it other than the doubles to the weak side of the formation instead of single backs.... 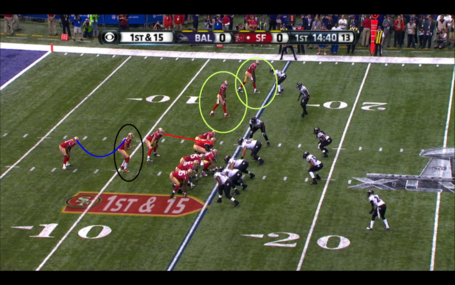 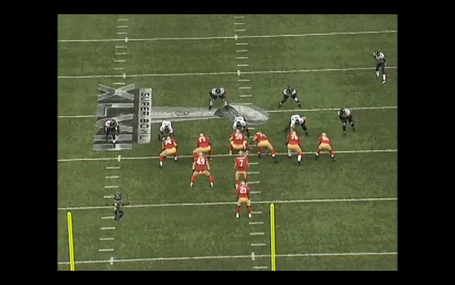 The NFL running game is pretty simple, once you get past the fact that they have different formations and skill sets.

So the basis of the formation and the basic play we have is the zone read. The Jets and the 49'ers both use this concept, the Jets mostly used it with Brad Smith and Tim Tebow.

Just a few notes though before we begin:

Notice a few changes to the formation, although at the heart it is the same as the single wing.

The RB moves over to the TE on the left and the TE/wing move into the wide out position although is still tight when compared to many wideouts. Yes this is a regular shotgun formation but you do see where the formations developed from. 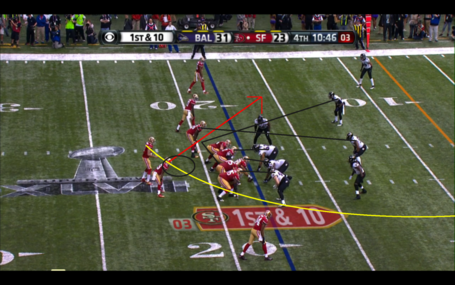 The biggest concept is the mesh point (black circle) that is where the QB must make a decision whether or not to hand the ball off. the line is in a zone/man scheme where everyone is zoning straight, but the guys on the outside are all zone blocking. Notice no one picks up Ray Lewis which is the man being optioned.

That being said it's up to the QB to see exactly what the defense gives him as he makes his decision at the mesh point.

If this seems familiar let's go back to the wildcat and the Jets in 2009.

Same play although instead of going inside Brad Smith takes it outside with an option look. But the idea is the same. 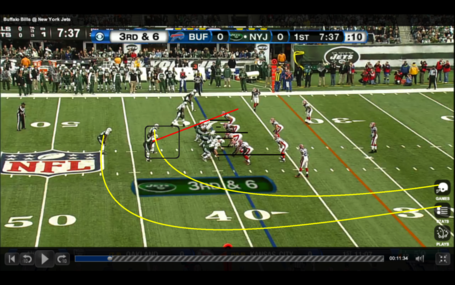 The same base concepts can be found in the single wing playbook.

Now though, instead of just being a running formation it can be adapted to the passing game

Same formation as the wildcat except this time they pass it. The PA fake sometimes can be used as a read option. Once again the mesh point the QB can hand it off or hold it. The routes are shown just to show how the spread works using the running/meshpoint concepts above. 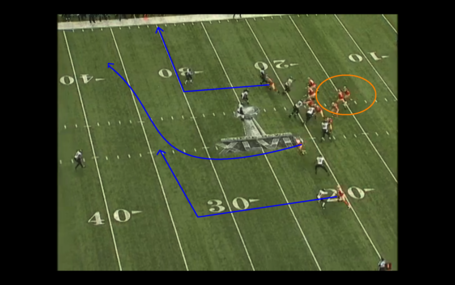 So let's wrap this up:

Who came up with it? Pop Warner came up with the single wing in the 1900's and it has been adapted by offenses today.

Why use it? Because it is deceptive, tough to defend, and requires good assignments from defenders.

Weaknesses: originally developed to be a run, the single wing is easy to defend. However, by adapting it with the spread, it gains benefits. Problem is it is a relatively small playbook.

Stuff to impress your date with: The single wing traces it's roots to the early 1900's when there was no NFL.

Just remember something, because someone says they brought a new concept, it may just be an old one that is adapted and changed slightly for today's game.