In the last installment we took a look at the defensive back schemes. Now we are going to really dive into offensive line schemes. Two base concepts are used: man and zone blocking. Here we'll break them down and show you the X's and O's you see on Sunday.

Once again in this case: there is no person who created man and zone blocking, it's been around as long as the pigskin and field. However much like the cover one and cover 0 discussed last week, every team has a similar concept in the playbook and can alternate schemes each play. In the NFL, there are coaches who only rely on one kind of blocking scheme to win games on Sunday and usually don't run the other scheme (most notably of which is Mike Shanahan-led teams using the zone blocking scheme.) However, most teams do run both schemes, although teams have trended to move more onto zone blocking schemes over man. Interesting enough, Brian Schottenheimer ran almost all zone schemes. Tony "fade to black" Sparano ran a combination of both.

The same players can be used in both schemes. However, bigger more physical offensive lineman are better suited for man-to-man schemes where it's one on one. Quicker offensive lineman are more suited for the zone blocking scheme, where quickness is the bigger factor in success. In essence the smaller and quicker the lineman the better it is to run a zone scheme and the bigger and slower your lineman, it's probably a safe bet to go to a man scheme.

The zone has become more in prominence in part due the popularity of the spread offense in recent years. The zone offense is primarily a zone running scheme, which allows the line to open up holes using speed and quickness rather than true grunting power. (There are other reasons too, I'll talk about in depth later.) If you've ever heard the term zone read before, the zone part comes because of the play scheme, which is based off of, you guessed it, zone blocking.

Also of note: the zone requires less rules and memorization. (personal experience: as a center I had to learn 151 plays and 5 variations for each type of defensive front in man schemes. In zone: 3 plays, one variation. Much, much simpler offense for teams to learn. For instance, if a team changes the front (shifts from 3 to 4 man line or simply over a man) the man-to-man schemes become a logistical nightmare of trying to sort out who is blocking who on the line. This is not to say the zone is the best scheme, it just happens to be easier.

(Pro tip do not read the actual terminology, unless you really want to be confused. Just look at the number of different rules for each one) (and for the record, I understand what the scheme is, although the terminology is totally different then what I played under) 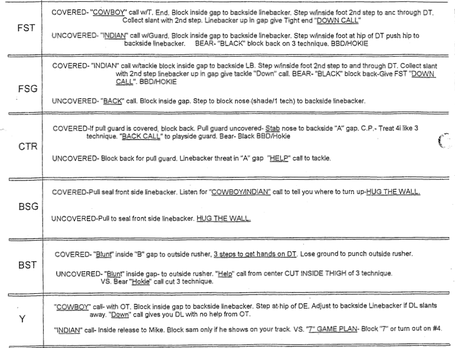 Notice how each player has multiple rules and assignments for just one play. Now check out the zone's rules: (This one you might be able to pick up a few things here and there, but same thing, just take a look at the amount of rules.) 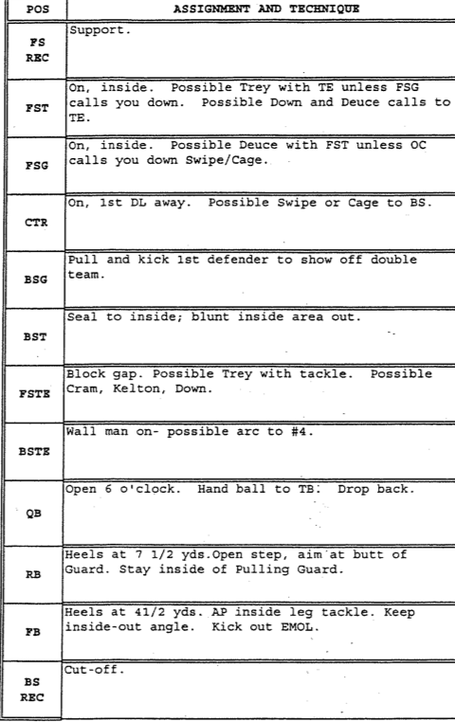 Below I will show you the two plays, so without further delay, let's really get in depth and break this down further.

What separates a man scheme from a zone you might ask? To be honest for the untrained eye, it's hard to pick up at first, but as you see it you will understand. Zone schemes are literally zones of blocking. Much like in basketball, you don't play the man, just the man that goes into your zone. It doesn't matter who or what he's doing, you go and get him. In man schemes, you pick up your man and rely on everyone else to do their jobs. In zone, there is a lot more double teams and cut blocks. Double teams are the heart of what makes a good zone scheme.

Let's take an example to show you the difference. This is actually the picture version of those two plays that I listed above. The schemes are almost alike, but again to a trained eye, you can tell the scheme being run.. I'll point out where. Also note: the man scheme has about 5 variations for fronts so again you see the problems

Now for the zone scheme: and yes one size does fit all:

The biggest difference is take a look at the zone scheme. Every player other than the RT and the LG (whose pulling) is "blocking back". Ie they are blocking everyone to the left of the play and playing a zone left scheme. The TE whose on the right actually could pick up the E, the M, or the W depending on who comes into his zone first. Contrast that with the man scheme, where some players block the guy straight in front and others block back. In the zone, everyone does mostly the same thing outside one or two guys (which is usually where the play or fake is going). In man-to-man, it's all about individual matchup and pushing your guy back, in zone, it's all about creating an area.

Zone blocking was conceived fix a lot of the problems with man blocking and defensive line. Let's dial up a play, because it's going to be easier to show then tell.

Here we have a simple isolation up the middle. Nothing fancy as the RB gets the ball and the line is man blocking... The defensive line however, slants, causing some issues with a man scheme. 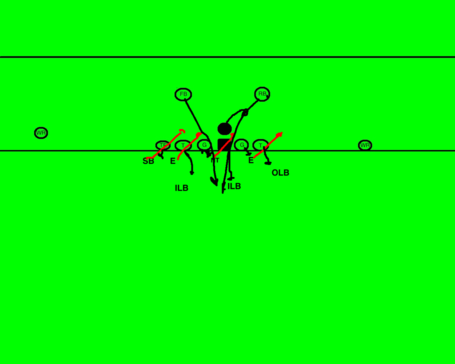 Our right tackle (next to the TE) is supposed to get the ILB with the TE getting the E. However, both encounter problems because the man crosses in front of them, forcing them to take him on rather than the assigned man. The same thing happens with the center and the tackle.

Thus a zone scheme was designed to try to fix this issue by allowing a double team on the players, with a "peel" block to the LB. It's hard concept to imagine, but in a double team block, one man leaving to get the LB. Almost always it will be the guy closer to the hole in which the ball is going. Here's a visual of what I'm talking about: 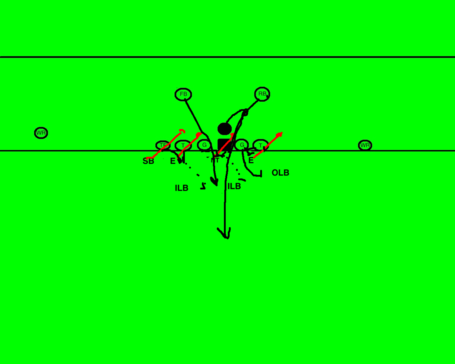 Notice now the TE takes the end on. leaving the SB alone (another hallmark of the zone is allowing a guy into the play that won't be able to disrupt it). The TE and T double team the end, and then the tackle releases and goes after the ILB. Same concept at the center position and guard position. A double team, and a peel to the ILb. The other guard zones off the OLB, while the tackle zones off the other end. Once again, everyone gets a zone and it doesn't matter who is there, just whoever is in your way, you take. A side note, sometimes you will see it, mostly on short yardage plays are cut blocks on the far side. The idea is actually simple, take down your man, open the hole he'd cover and make more room.

(Perhaps my greatest highlight as a center was using a cut block in a zone scheme. I told the guard not to double team, but to go straight to the LB. Even though the play was on my right and he was over the guard, he ended up on the ground out of the play as soon as it began thanks to my cut block. It caused a 5-8 person pileup of defenders, and the running back hit second gear, slowed and cruised for the easiest 8 yard TD of his life. Quite literally, the hole on tape was 5 yards wide, which is why banning the cut block may reduce the amount of zone schemes.)

However, both of these differences pale in comparison to the way plays are developed on the chalkboard. Man-to-Man schemes are based on a running back hitting a certain hole for each play. Zone schemes are based off of hitting any hole available. Man-To-Man blocking is all about making one play work in a certain hole. Zone is about creating multiple "lanes" for a running back to choose from and letting the RB decide which one to hit. In fact zone schemes have only a few plays in the playbook. Almost all the plays deal with where the running back takes the first few steps, and then decides where to take the ball. Most plays are designed with the running back getting the ball inside, outside, or on a pitch and then deciding where to go.

Case in point: LT was a beast at this. Check this play out: (click to embiggen) 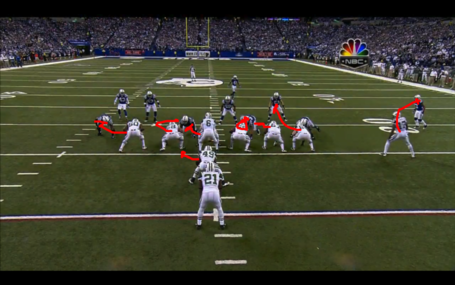 Notice a few things... one no lineman is passed the line of scrimmage. They all are in a zone, almost pass block (yellow box). Two check out all of the different holes LT can choose from. he has at least 3 by my count that are well blocked and two bounces that are possible. (FYI he hits option dark blue for about 20 yards. Wouldn't think it would you?) 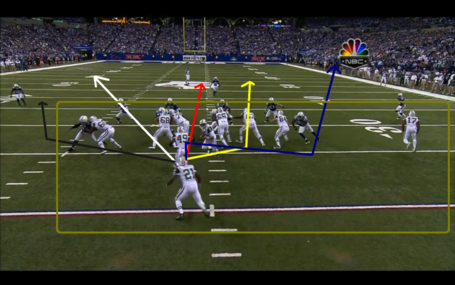 That is what makes the zone so lethal. One play 5 different holes have to be covered. The defense almost is forced either to plug every hole (46 bear defense) or read and react and then outspeed the RB to the hole of his choice.

In a man scheme: things are a little different. This is the blocking I watched (thanks NFL films!) and then jotted down. 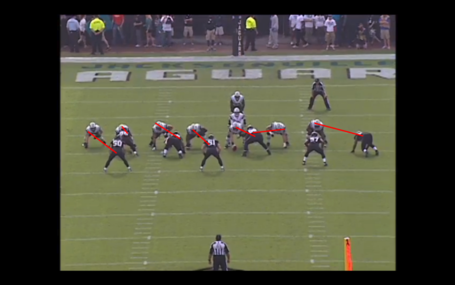 Notice how 57 is left alone, there are no cutbacks because of that.. (obviously a man scheme, otherwise the guard would pick up the ILB 57 and some kind of double would kick in.). Also because Moore was little late getting to the ILB (51) Greene ended up bouncing it outside the only place he could have gone.

Man to Man forces you to execute on one hole, limiting your options. However, a zone scheme opens up your options, but if there is contained rush it disrupts your hole play, timing and scheme. In both cases, blind rage blitzes, where a defender rushes upfield and can be taken out out of a play really hurts the defense, more so in the zone scheme, unless that's where the man play was going to. I can't find a lot of plays that really show a ton of man blocking,

So anyway I think that's a pretty good idea of what's the difference between man and zone blocking. Zone requires speed and quickness. Man-to-man requires a lot of grunting. Zone requires picking up anyone who jumps in your zone, while man-to-man requires picking up an identified man. M2M schemes tend to have more variations, struggle against multiple fronts, and also against slants and stunts. Zones tend to struggle against a contained rush from the middle.

Trivia to impress your date with: Generally speaking the zone only has 3 plays. Inside zone, outside zone (off guard/tackle) and then stretch/sweep. Non of them are where the ball has to end up, but rather based off of where the running back takes the ball and makes a decision.

Alright so you think you know it all, internet tough guy? Here's your chance to prove it.Tell me then which scheme is this? Zone or man?