In this edition we forget about the running touchdowns and focus on some of the big plays during the game.

Share All sharing options for: GGN Chalkboard: Jets vs. Panthers

Let's start off with the play that is a microcosm of the Jets defense. On this play we saw Dee Milliner's lack of physicality, Ed Reed's decreasing range, and David Harris's piano on the back. For added bonus, Antonio Cromartie was no where to be found chasing the play. Even the camera didn't pick him up, so my guess is he pulled up right away.

Anyway let's do it: 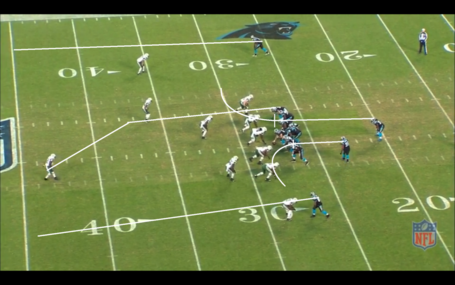 First off it was an extremely slow developing play. At one point I clicked ahead thinking Game Rewind had messed up. Nope, just a play that the route took forever to get out and no pass rush. As for the routes, both backs run swing routes, but the play goes to the RB after the fake to the FB. The WR and TE all run a 3 deep concept. The RG and RT end up setting up a screen after a few seconds. 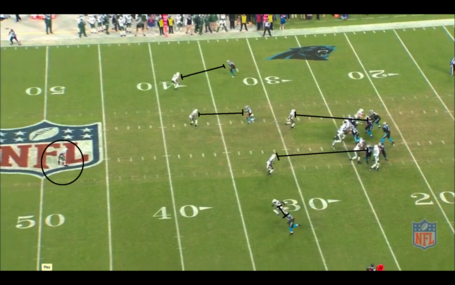 It's cover one with straight man underneath plus a five man rush. It's good coverage on the secondary's part so kudos to them. The problem is underneath. Both Harris and Davis on the RB and FB respectively are playing off. This is not usually a bad thing, but here it allows time for the routes to get open and allows the blockers to get a step on Harris after the slight misdirection.

Here we see the results: 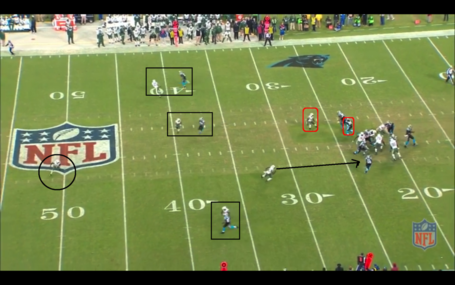 Harris gets caught moving. Ed Reed starts to spring towards the FB side. Davis plays his man as he should. The Jets DL bites hook line and sinker on the fake. On a plus note, coverage was great deep, so we had that going for us, which was nice. Now a few seconds later: 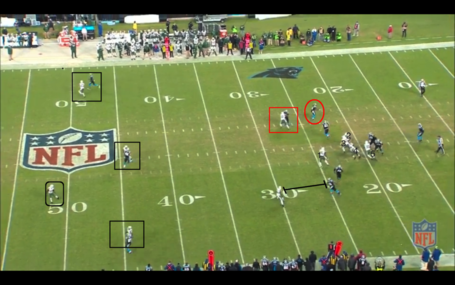 Here you can see the issues immediately. Harris is blocked. 5 guys on the line were fooled. The secondary is in man and focused on their guy. Ed Reed is totally fooled and then compounds the issue.

Want to see how badly everyone gets fooled on this play and why Miliner and Harris were hung out to dry? Well here you go: 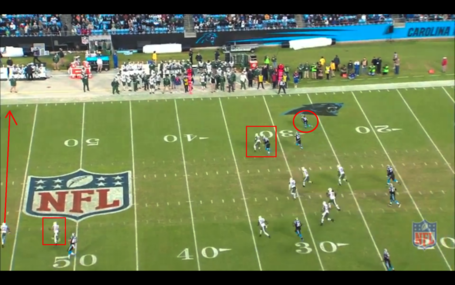 Watching the tape, looks like Ed Reed misjudged the speed. He takes a flat angle then starts to go more vertical. Unfortuantly the end result is a total fuster cluck. Note Cromartie is not here. He was even with Landry but now is nowhere to be found. 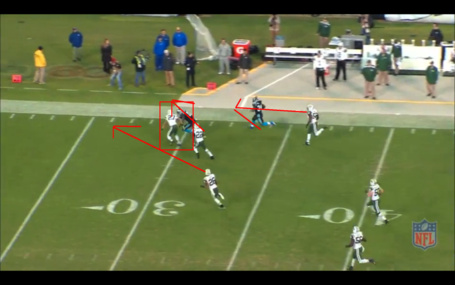 Let's go to a good note. Early on we had a great run to Ivory for 35 yards. This is where a wildcat/ triple option attack can help the Jets out. The play was well-designed and well-executed. 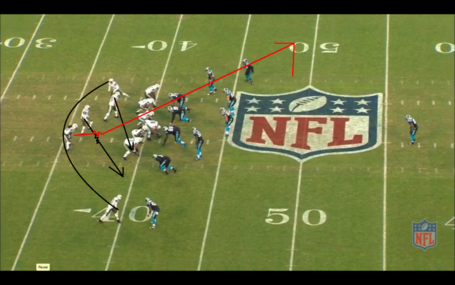 It's straight out of the Army playbook. Jeremy Kerley starts off as a left wing then swings around to the outside. Tommy Bohanon is the inside guy whose going to provide blocking. Geno hits the mesh point with Ivory. I'm not sure whether this is a designed counter trey play or it's a read play. My guess is it's a read play, and Geno is reading the end. 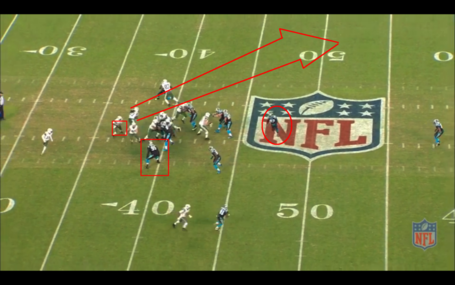 Either way the play is a smashing success. Look at the giant hole. The linebacker is completely fooled and takes himself out of the play. On the other hand, the end is completely on Geno and looking for the pitch. This is a perfect design, and would personally like to see more of it.

Looking at the Geno pick, I originally blamed it on Holmes, but after looking at the tape, I see what Geno saw and now understand why he thought Holmes would be wide. Here are the routes. On one side is a variation of the arrow comeback concept, except Holmes runs what looks like a 10 yard in route. Underneath, the arrow route is run. On the other side Nelson runs a deeper comeback route, while everyone else runs short stop routes. 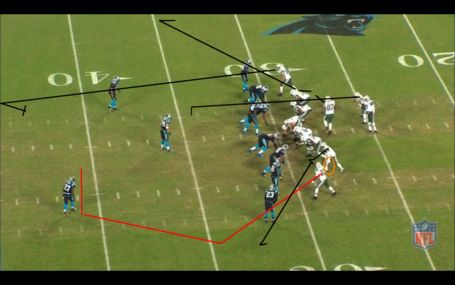 Defensively here is what Geno saw, man-to-man with a guy over the middle. Looking at this defense, Holmes would be open on a quick throw over the middle. Everyone else is covered with the exception of Powell. 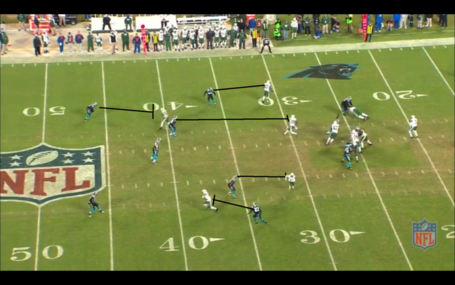 Except that isn't what Carolina was playing. Watch what defense Carolina actually plays, and understand the reason for doing it this way. We like getting on Geno for bad picks. Sometimes, though, it's a well-disguised defense that's the cause. In this case it's half disguised defense, and half Geno forcing another throw 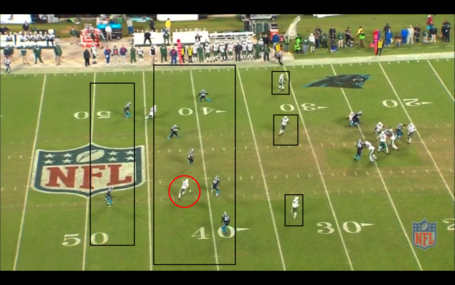 While Holmes looks open in that first image. Check out now. He's got 3 guys in a zone right around him and it's not a big window.

Look at the guys underneath. What looks like a man scheme is actually a cover 2 zone and the guys underneath that were covered are now open. Holmes is triple teamed and that's where the ball went to for a pick 6. That's something you wouldn't see unless you took a look at the film.

That does it for this version of GGN chalkboard. As always any questions are free game, I'll do my best to answer them.