A perfect fall day for football.

It's going to be cool and partly cloudy on Sunday - a perfect fall day for football.  Game time temperatures will sit in the mid 40's with a gentle breeze of around 5 mph and little chance of precipitation.  Winds, temperature, and precipitation should not be factors in Sunday's game.

The weather will make it relatively easy for the quarterbacks to pass the ball for a December day in East Rutherford.  If ever the Jets wanted to re-establish the deep passing game for Geno Smith, Sunday's weather provides an excellent opportunity.   Of course, the opposing pass rush and the struggles of the offensive line may make such conditions moot.

Sp0rtsfan86, our resident meteorologist, has been kind enough to share his forecast for the Metlife Stadium winds on Sunday, which you can see below: 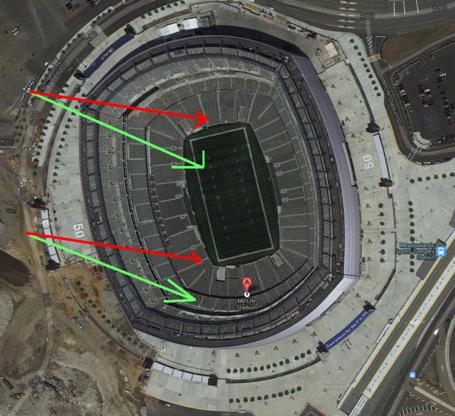 Quoting sp0rtsfan86:
"The red is where the wind will be at the end of the game, green in the beginning. Winds will be under 10MPH so it won’t make a difference other than becoming more cross wind than end zone to end zone.
The winds will shift slightly from the Northwest to the West… but we all know how much they swirl in the stadium. Other than that it does look like it will be cloudy but some blue will be there during the 3rd and 4th quarter."

Enjoy the football weather everyone.  For those at the game it may be the last semi-comfortable day to spend several hours outside watching the game.