After reviewing the tape, I'm starting to question a lot about this team starting with the coaching and some of the play calls.

Alright let's start off with this. Thankfully there weren't a ton of bad plays, but the ones that were bad were really bad. I almost hope we find out Geno was hurt during the game. Otherwise, he's got no excuse for how bad one pass was. Let's do it.

Let's start off with the lone bright spot on defense, the Cromartie pick. Let me be frank with you. It's not like the defense played this great. In fact, it took a monumental error for this to go badly for the Ravens. They had the perfect call for a soft man coverage.

Flacco and the WR got completely confused on the route. I have no idea what Flacco was throwing based on the tape. I can assume one of two possibilities. The WR was supposed to run an out route or a banana concept and instead ran a stop route. This is supported by the game tape showing the same concept on the other side. Or the Ravens were supposed to run 3 hitch routes and one out route. The first I believe on the tape. The second theory was because it makes zero sense to run two guys into the same area. 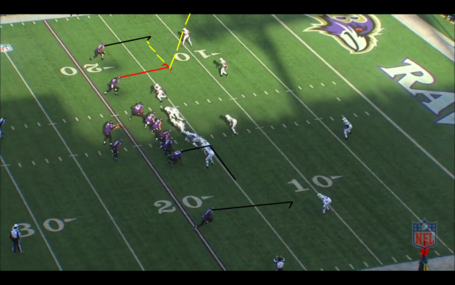 You can see what I mean here. Ravens are running a short route concept that is designed to A. Get rid of the ball before the blitz can get there and B. to take advantage off the soft man coverage. It is a perfect play call for the defense being played.

Take a step back and look at the concept on top. The red is what the slot man's route looked like on film. Assuming where Flacco threw the ball, the two yellow routes are what he thought was going to happen. I can see the corner route being the play design (banana concept/or smash depending on the terminology).

Back at the ranch that is the Jets defense,they played it like it was going to be a deep concept. This is what I'd say a good OC can do, call a perfect play against the defense. 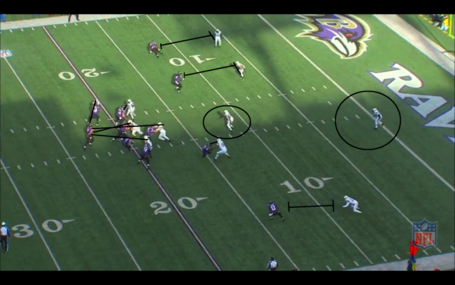 The Jets run a man concept on the outside with what looks to be one deep man and one underneath. I think they are running what is known as the robber concept here with a 5 man blitz. Here's the irony of the situation. All of the DB's are 5 yards off the WR, and the guy who has the best coverage is Coples on the TE. That makes me laugh a little. You can see though Flacco has time and the two guys have a cushion. What happens next is perplexing as Flacco throws directly between the WR's right to Cro. 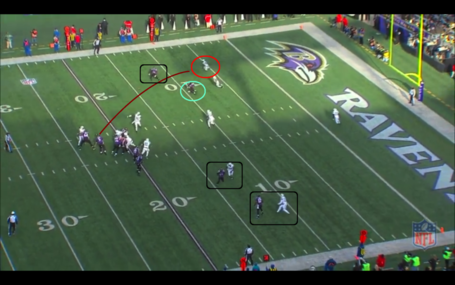 On the plus side: Coples and Millner do have coverage on the other side, but it's just a bad pass.

Keeping the theme and looking at defense first. We move to the back-breaker that was the long TD pass to Jacoby Jones. I'll be honest here. As I was watching the tape I yelled, "It's only a three man Route!" It was just a total debacle on the play. 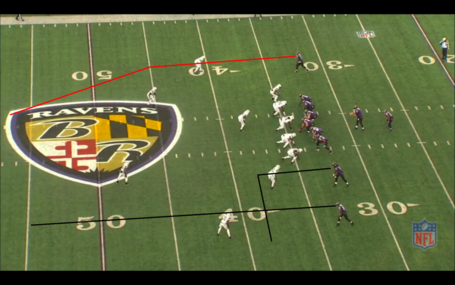 Jones runs a post route that is designed to stretch the field. On the other side is the simple deep route with an out route underneath it. The Jets here show a complete lack of defense all across the board. 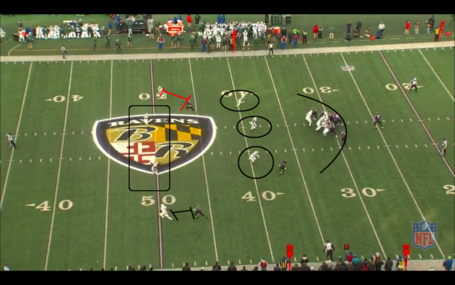 Despite running a five man blitz, the Jets don't get within five yards of Flacco. That's just terrible across the board. The Jets' underneath pass coverage is suspect here too, with the slot man getting to the outside of the zone. That could have been an easy 15-20 yard gain with a good pass against that kind of defense. However, Flacco went for the home run and hit the upper deck. I have no idea what the safeties are doing. None. This looks like cover two, but the safeties aren't providing deep help. Are they just standing there taking away the non-existent fourth or fifth guy? I have no idea. Millner's coverage to me indicates he think he has help over the top which due to the safeties standing still. It's pretty obvious there was some kind of error.

Here's where Ed Reed makes a great play getting back, but then ends up screwing it all up by not looking for the ball and taking Millner completely out of the play. A two for one gem that will live in the You Blew It HOF. 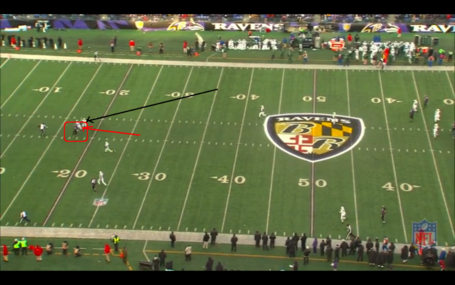 Reed's path to the ball is int he red while Wilson's is in the black. Because Reed thinks the ball is going to end up in the middle of the field and not on the hashmarks, he overplays the route and ends up nearly running into Milliner. Now ask me who was wrong on the play, and I'll not be able to tell you. What that defense was, I have no idea. My guess is there was a big miscommunication on what play or coverage was called. I'd say this: I'm going to give a full share of You Blew It to Reed and a half to Milliner.

On offense, I won't do too much time on it. Another member did a great job talking about the Geno picks in this article here. Generally speaking I only cover the TD's or the turnovers, which were covered well. It's well worth a good read.

So I'll give a spark notes version of what I saw on offense.

The first Geno pick was 50% on him, 50% on Nelson. Geno threw a lame duck pass, (It's easy blaming the line but good QB's can make the throw) and Nelson just kept on running without an adjustment. Nelson did have his man beat deep so a good pass would have done wonders. I really hate to get on Geno for that pass because Nelson did such a poor job, but he's still the QB.

The second was a perfect defense that allowed one man to cover two guys. A well-disguised defense can always beat a good offensive play. As for next week, just hope we see the offense come out of nowhere.